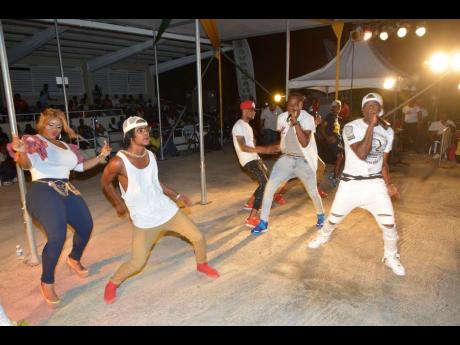 Contributed
Miss Kitty joins the Ravers Clavers on the stage during Ding Dong’s performance, much to the delight of the crowd. 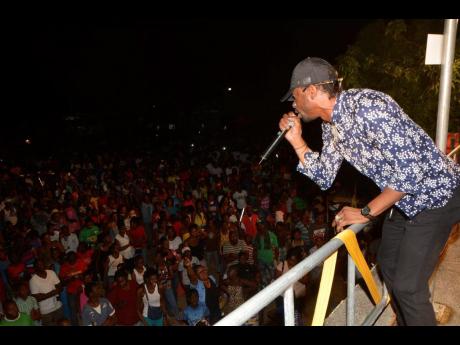 Contributed
Bounty Killer has the crowd enthralled with his set, delivering hit after hit from his extensive catalogue.
1
2

More than 1,000 patrons turned out to take in the annual Digicel Emancipation concert at the Denbigh Agricultural, Industrial and Food Show on Saturday.

With impressive performances by Ding Dong, Bounty Killer, the top 10 finalists in the 'Digicel Rising Stars' and the popular Digicel Dancers, the concert brought the day's celebrations to an energetic close.

Hosted by the dynamic Miss Kitty, the night started out with the contestants from the 'Digicel Rising Stars' competition with the wild card Marsha Kaye and Roshelle being among the favourites. Marsha Kaye's rendition of Tessanne Chin's Tumbling Down thrilled the audience, and Roshelle drew the biggest crowd response when she belted out notes from Jennifer Hudson's hit, And I Am Telling You.

Ding Dong and the Ravas Clavas dancers later took over the stage with a bout of high-energy dancing to party favourites like Gas, Nuh Linga, Holiday, Syvah and of course popular dance moves like Seh Feh and Shampoo.

A newcomer to the Digicel stage at Denbigh, Ding Dong was delighted by the energy of the crowd, saying, "Emancipation Day is a proud day for all Jamaicans, so this was a great moment for the Ravas, performing at Denbigh for the first time. Digicel really helped to create some vibes in the holiday for the people coming out to Denbigh with this concert, and we just love the energy that the crowd had. I tell people all the time that the biggest line in my song is 'I am from Jamaica' and it's true. Tonight, I'm really proud of that."

The highlight of the night for many, however, was headliner Bounty Killer, who delivered an arsenal of hits, including early picks such as Riding West, Mystery and War before pulling from his more recent catalogues with Gyal A Mad Over We, Just A Sing 'Bout Gyal and War Lord Nuh Business.