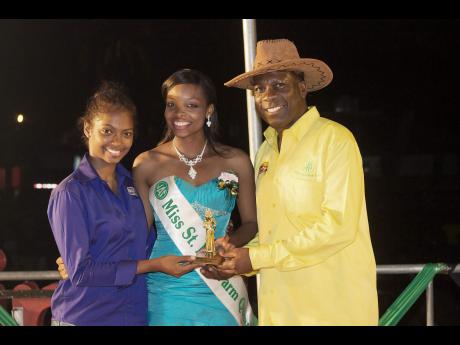 Traditionally, when you think of farming or activities associated with farming, what comes to mind? We bet nothing as glamorous as what was displayed at the National Farm Queen competition on the opening night of Denbigh 2015.

The National Farm Queen competition, which celebrated its 52nd staging on Friday, is a pageant within the annual Denbigh agricultural show, used to highlight the 'softer side' of the agricultural sector.

This year, title sponsor Nutramix, a local feed company who under the tag line, 'Lets Farm Together, Let's Grow Jamaica', decided to get involved with the competition with hopes of getting younger persons more excited and involved in agriculture.

"Women have always played a pivotal role in agriculture and this competition will be a medium through which these women are celebrated and recognised as they continue to contribute to the agricultural sector," said Tina Hamilton, brand manager for Nutramix.

Despite its late start, the show saw a display of intelligent and talented females vying for the top spot. The talent pieces were centered around promoting safe and effective farming and were delivered to a panel of judges, including a previous Farm Queen, Paulette Lyons-Dodd, Jonathan Laney and guest Judge - CB Foods' communication coordinator, Andrew Raymore. There were also rousing performances by various artistes and a serenade session for the females by Noddy Virtue.

President of the Jamaica Agriculture Society, Senator Norman Grant, also awarded each contestant with a certificate of participation and gift packages from sponsors.

The night ended with a farewell speech by National Farm Queen 2014, Tishauna Mullings, who handed over the crown to this year's queen, Peta-Gaye Stewart from St Mary.