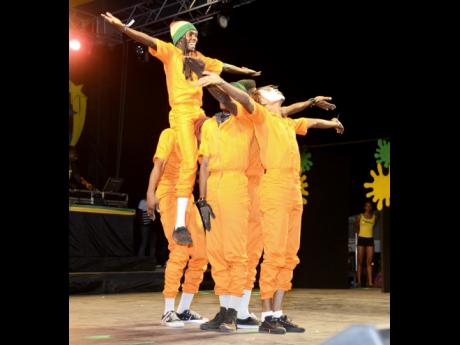 Str8 Edge Classic Dancers from Kingston are the 2015 World Reggae Dance Champions. The group emerged winners from an elite group of 16 finalists who danced their hearts out on stage at the grand finale on Wednesday night.

Starting at 8:30 p.m. to a packed venue, the show held at the Independence Village at the Ranny Williams Entertainment Centre was one of pure entertainment, as guests were treated to much more than a dance competition. However, despite getting more than they bargained for, the audience made it clear what they came out for when it was announced by the night's emcee, Jenny Jenny, that the competition was about to begin. Loud screams and cheers echoed throughout the venue as the first group hit the stage.

Dancers of Jamaica, an all-female group, opened the night's performances with a high-energy routine. Using crates as props, the group delivered a good performance and was well received by the audience, and as the night progressed, things only got better. High Voltage dancers and Dustville dancers were next on stage and they, too, delivered well.

However, when Di Koloni dance group hit the stage, they outshun their fellow dancers. As they executed their dance moves, the screams from the audience got louder and louder, and by the end of their performance they were clear crowd favourites. The other dance groups also performed well, using everything from handcarts, jelly coconuts and even a spaceship as props to enhance their routines.

When Str8 Edge Classic dancers touched the stage, they took over as favourites before even doing a single move, as their orange prison jumpsuit costumes alone had the audience in a frenzy. The group stood out from the rest, not only because they were exceptional dancers, but because they offered the complete entertainment package. They told a story with their routine, one that the audience was familiar with and one they could relate to. The dancers represented prisoners who just escaped Horizon Remand Centre, and among the escapees was Adidja Palmer, more popularly known as Vybz Kartel. They incorporated music from the incarcerated deejay into their routine and had the audience totally captivated. When they completed their set, the entire audience inside the Ranny Williams Entertainment Centre stood, clapping and cheering.

Str8 Edge Classic Dancers walked away with a $500,000 cash prize along with the 2015 title of World Reggae Dance Champions, among other prizes. They also won the sectional prize for Best Costume for the second year in a row and was awarded an additional $30,000.

Ducati Dancazz, the only international group in the competition, walked away with the prize for Most Disciplined group, which also attracted a $30,000 reward. They also received plaques, courtesy of the JCDC, for being the Best International Entrant. Second- place winners, Dominant Nation, walked away with $200,000 while third place went to Di Koloni, along with a cash prize of $100,000.

The night's entertainment package included a sound clash between Coppershot and DJ Chris Diamond from Code Red. The clash turned out to be one of the night's highlights, as the selectors from both sound systems put on a show to remember. The tune-for-tune segment, although one-sided, had the audience totally enthralled. Chris Diamond of Code Red stole the show from the beginning. Receiving some of the night's biggest forwards, Diamond slew the Coppershot deejay in every round and emerged the winner by a landslide. There were also performances from Beenie Man, CeCile and Ancient Priest, the 2015 Festival Song competition winner.