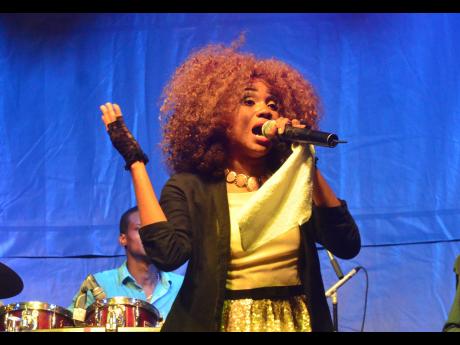 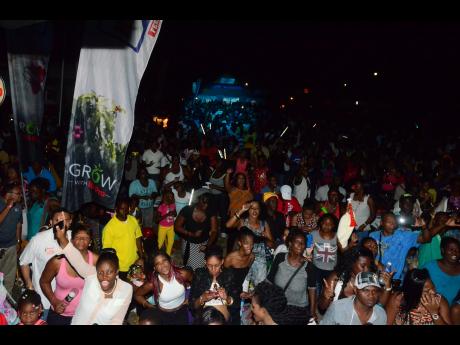 The recently staged Hi-Pro Denbigh Gospel Extravaganza has been described by Tommy Cowan, CEO of Glory Music, (the show's producer), as the largest held over the past five years.

An estimated crowd of 18,000 gathered at the Denbigh showground to hear their favourite gospel performers, Carlene Davis, Goddy Goddy and Kevin Downswell, who each led one of three segments of the show.

The event kicked off half-hour late because the Denbigh programme overran. But when it began, Jermaine Gordon set the tone for worship with songs like Thine Is The Kingdom and You Are God, backed by his guitarist and the On The Shout band.

Visually impaired singer Courtney Cooke was up next, and he delivered Gi Mi Pass, Leave It There and a mento medley, I Have A God. Anishca Judah, finalist in the 2014 JCDC Gospel Song competition and worship leader at Church on the Rock, gave a spirit-filled presentation, to the delight of the Denbigh audience, who were seeing her for the first time. She opened her set with an original, The Word of God, and closed with Break Every Chain.

Singjay Kevin Heath - who lives in Grand Cayman - followed with a 15-minute set that included his song of testimony, True Friend.

JCee blazed on the set with her fiery red hair and lifted the place with Let It Guh, Oops, Somehow and You Are God Alone. "JCee is a performer to watch. She has the star quality," said Tommy Cowan.

Leader of Prayer 2000, Pastor Naila Ricketts, and Minister Cameka Taylor led a heart-stirring 15-minute prayer session for the children and the leaders of Jamaica. He prayed for God's deliverance over incest, sexual promiscuity, murder and spiritual wickedness in high places.

At this point, Senator Norman Grant, president of the Jamaica Agricultural Society (JAS), presented a JAS Lifetime Award to Tommy Cowan, who introduced the concept of a Gospel Extravaganza to Denbigh 16 years ago. In response, Cowan thanked the audience for their support over the years and lauded the Hi-Pro and the Best Dressed Chicken brands of the Jamaica Broilers Group for their long-standing sponsorship.

Then it was time for Minister Carlene Davis, the performer who holds the #2 spot on the Reggae Billboard Charts with Dripping Blood, who entered the stage singing, One Handful Of Salt, followed by Nothing But The Blood, during which she showed her versatility by rapping some of the verses. She also performed songs from the Dripping Blood album, as well as favourites, Nobody Greater, King of Glory and King of Kings. But it was her rendition of This Island Needs Jesus and Days of Elijah that had the audience jumping.

Goddy Goddy turned up the heat even more. Now an ordained pastor, the popular gospel performer sang Brim Stone, Chaka Chi, Money Magnet, Fill My Truck. On his leaving the stage, the applause from the crowd was deafening.

Kevin Downswell brought the curtains down close to 11 p.m. He opened his set by declaring: "I'm a worshipper." Then he got into the popular If It's Not You, It's Already Done, That's Enough and his mega hit, You Make Me Stronger.

He shared his testimony of being born to a mother of 14 years old, but who was full of purpose. He then made an altar call and scores of hands went up, signalling their desire to commit their lives to Christ.