Independence to you, nuclear bombing to me 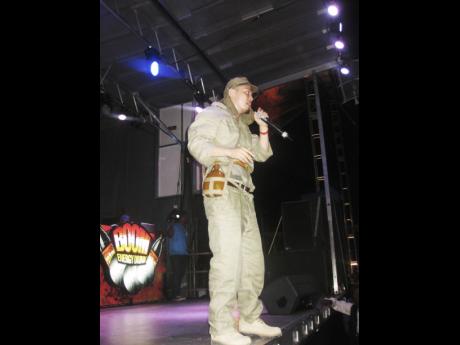 The microphone man for Japanese sound system Barrier Free, one of the overseas guests on Saturday night's Jamaica Sound System Festival at Grizzly's Plantation Cove, Priory, St Ann, made full use of his heavily accented English-Jamaican in engaging the audience.

And the large audience appreciated the speeches supported by selections, but voiced its objection loudly when the selector was interrupted by event host GT Taylor as he spoke about homosexuals in Jamaican terminology.

The dissatisfaction was strong enough to continue being a talking point at the event for some time after it occurred.

Barrier Free also made an August 6, connection between Jamaica and Japan, as it is the day of Jamaica's Independence from Britain in 1962, but also when the United States dropped the atomic bomb Little Boy on Hiroshima in 1945 during World War 2. The bomb, nicknamed Little Boy, was delivered by a B-28 Superfortress Enola Gay.

Not only were thousands killed instantly, but many thousands more died from radiation exposure subsequently. Little Boy was the first atomic bomb to be used in war; the second, Fat Man, was dropped on the Japanese city of Nagasaki on August 9, 1945.

Barrier Free was one of three overseas guest sound systems on the bill, the other two being Heavy Hammer (Italy) and Downbeat (USA). From Jamaica, Stone Love Movements and Bodyguard were officially listed, with Jack Scorpio of Black Scorpio having a stint.

Barrier Free spoke about homosexuality before Hiroshima, tacking the topics in two different playing stints. Homosexuality was named as one of the things the selector did not like.

"A while ago I was talking about informer, right? The second thing that I do not like is b...man," he said. There was a strong favourable crowd response and he continued. "Listen me no man," he said, to calm the clamour, going on to speak about walking in Kingston the previous day and seeing two men cursing each other about being homosexuals.

"Make me taught them deh one thing. Fisherman talk bout fish thing, right?" he asked. By then GT Taylor had touched him on an outstretched arm, trying unsuccessfully to get his attention. "Bad man talk bout bad man ting. Bad man talk bout gun ting. B..man talk bout?" he asked, holding out the microphone to the audience which supplied the answer, doing so again as he repeated the question.

The speech was supported by a Bounty special.

By this time, though, when the smiling selector walked across the stage he got close enough to Taylor for him to get the microphone. "Respect. Who love Barrier Free? Who love the Japanese?" Taylor asked.

He then explained the situation to the selector. "Barrier Free, due respect. In Jamaica, right now, because of certain things ... we have to say live and let them stay inna fi dem corner. Because of certain protocol, stay away from that and just deal with the tune," Taylor said.

The audience was not amused and neither was the selector. "Really?" he asked, back with the microphone at the front of the stage. "We cannot a talking about dem?" he demanded, with a slight pause before saying "dem." He then summarised a man to man sexual act, to the audience's delight, adding "me no like dat!"

Shaking his head as he paced back and forth, the selector said "so it go", seemingly as much to himself as the agitated audience. He used a special to fill in what he was not allowed to say. "All who agree wid myself, han inna de air," he said, hands and cheers going up. "So make me play one tune, final," he said, turning to the man at the controls. "Level level! This is a brand new Sizzla. I cannot a talk about dem, so Sizzla will talk about dem. Tune ago talk," he said.

And the song asked "how dem get so presumptuous, run come a jump up ... ." The selector leapt, the crowd roared.

At the end of another round in the early hours of Sunday morning, in which they used specials of popular songs (such as Bushman's Fire Pon a Deadas on the rhythm to Crazy Baldheads, after the microphone man blasted fake rastas who eat pork and go to Burger King), Barrier Free spoke about August 6.

And Barrier Free ended with Tony Rebel's Sweet Jamaica, closing to good applause. He had a parting shot though. "Have a good sex," he wished the crowd.