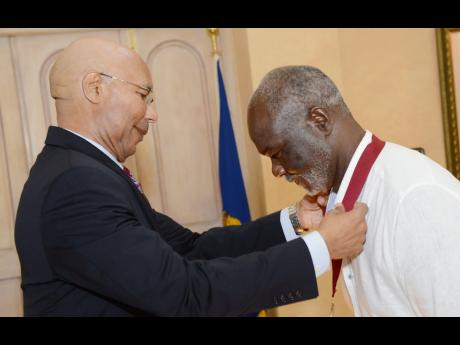 Rudolph Brown
His Excellency the Governor General Sir Patrick Allen (left) fitting the National Chorale of Jamaica Medal of Eexcellence on Sir Willard Wentworth White. The award is in recognition of effort, time and work in the field of music, focusing on commitment, talent and achievement. The award took place during a ceremony at King's House on Tuesday, August 11. 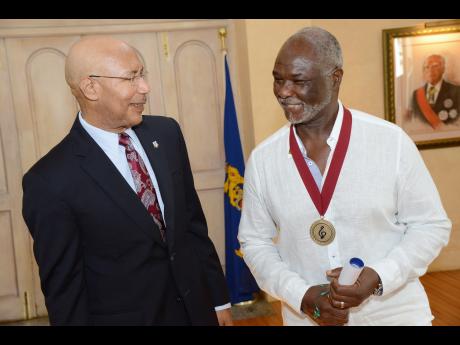 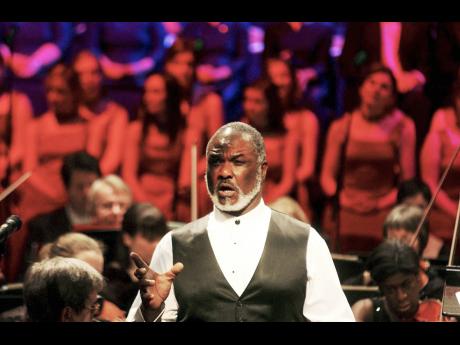 Jamaican opera singer, Sir Willard White, is the recipient of the National Chorale of Jamaica's Medal of Excellence. The honour was presented to the internationally renowned musician by the Governor General His Excellency the Most Honourable Sir Patrick Allen at a ceremony held at King's House on Tuesday.

The Medal of Excellence is awarded every two years to a musician, performing artiste or individual engaged in the area of music. It is in recognition of outstanding achievements and significant contribution to the arts, both locally and internationally.

During the ceremony, chairman of the management committee for the National Chorale of Jamaica, Hernal Hamilton, named White a musical ambassador, saying that he has represented the country well throughout his 40-year career.

Born in Kingston, Jamaica, Sir Willard began his musical journey with training at the Jamaica School of Music before moving on to the prestigious Juilliard School in New York to continue his studies. He made his career debut in 1974 at the New York City Opera and since then has performed in concert halls throughout the world, including the Covent Garden and Royal Opera in England; the Metropolitan Opera in New York, as well as opera houses in Amsterdam, Netherlands, Germany, France, and Madrid in Spain.

In recognition of his contribution to classical music over the past four decades, White has received several awards and accolades. In 1995, he was awarded the Commander of the Most Excellent Order of the British Empire (CBE) and the Gold Musgrave Medal by the Institute of Jamaica. In 2000, he was presented with the Order of Merit by the Government of Jamaica and was knighted in 2004 in the Birthday Honours of Queen Elizabeth II.

Sir Willard, in expressing gratitude, said that he felt great pleasure in accepting the award.

In a release sent to The Gleaner, the National Chorale of Jamaica disclosed that during the month of August, the group, under the patronage of the governor general, will be presenting the 1846 composition of Mendelssohn's Elijah. Sir Willard will be performing with the chorale in the lead as Elijah.