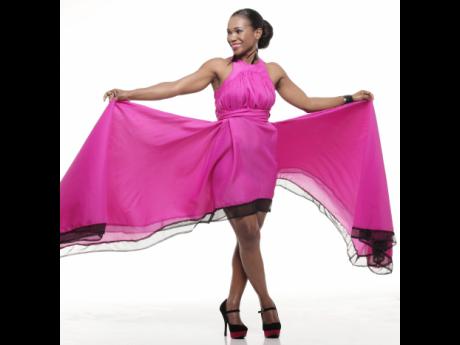 Singer, songwriter Sophia Brown has done many things in her life, but she is especially proud of her latest accomplishment - establishing the Angel of the Hearts Foundation (AHF) (www.angelofthehearts.com) to assist less fortunate children in Jamaica. A portion of the proceeds from all her performances will be donated to the foundation.

The Gimme That Good Love singer disclosed that AHF was something she had in her tunnel vision from she was a teenager.

"The foundation was inspired by just seeing the everyday living conditions of some children in Jamaica and us having that urge to improve their lives through better education, health care and economic opportunities," she disclosed.

"Ultimately, Angel of the Hearts Foundation hopes to bring awareness to the living conditions and the needs of the children. We hope to put proper structures in place to reduce these needs, if not eliminate them. We envision a Jamaica in which all children are able to reach their full potential and have healthy, happy and productive lives," the singer noted.

Brown said the AHF will focus on teenage pregnancy, poverty, food, education and sports programmes for children, as well as team with the Jamaica Down's Syndrome Foundation to provide assistance with children's programmes at the institution. Plans are afoot to host an official launch for the foundation.

"We are looking into doing a launch for the foundation first in the US, then Jamaica. We were planning on doing it sometime this year, but with all the crazy travelling going on, I'm looking at spring next year," she noted.

Brown said her team is looking to carry out her vision in the most effective way, so that children can benefit.

"Our goal is to eliminate tears from every child's eye and replace them with a smile. The smallest gesture can leave the greatest impact on someone's life, so join me in the fight to end sadness, using music as our weapon," she said.

The sultry lover's rock singer has had a hectic 2015, which started with a scintillating performance at Rebel Salute in Richmond, St Ann. Major gigs on her current US tour included a performance in New York at the sixth annual Linkage Awards, where we she won an 'Outstanding Achievement In Music Award'. She headlined Sophia Brown In Concert, which took place at the West Indian Social Club in Hartford, Connecticut. She then held fans in a musical trance at the Taste of The Caribbean and Jerk Festival in Hartford, Connecticut, where she shared stage with reggae singer Luciano a few weeks ago. On Saturday, August 15, she performs at the 15th annual Springfield Carnival at Blunt Park in Massachusetts, and then on Sunday, August 16, she will grace the stage at the 29th annual Caribbean Festival at Great Plaza, Penn's Landing in Philadelphia.

In November, she kicks off the second leg of a 12-city US tour. She then heads to Europe for another tour, which is being organised by her booking agent, Dream Team Entertainment.