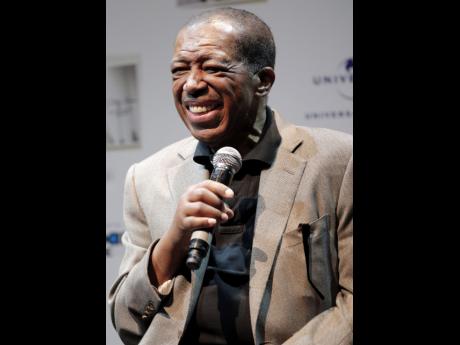 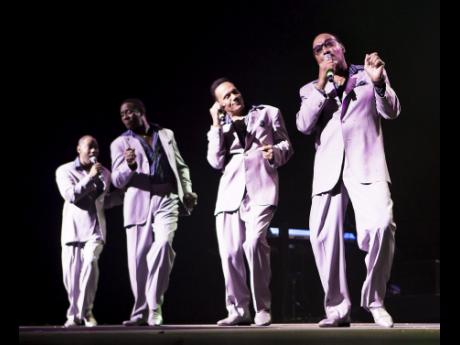 Voice
The Four Tops performing at The NIA, Birmingham. 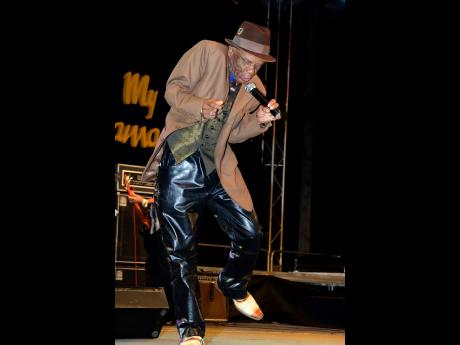 One of the features of 1960s Jamaica was the infiltration of foreign vocal groups into the musical culture of the island. Alongside popular local stars of the era like Jimmy Cliff, Eric 'Monty' Morris, Derrick Morgan, Stranger Cole, Delroy Wilson and Frederick 'Toots' Hibbert were several American groups who arrived on the scene shortly after Independence and were making appreciable inroads on the charts while winning the hearts of the musically inclined masses of the island. Foremost among these were The Drifters, The Impressions, The Temptations and The Four Tops.

Their input, not only added some spice and variety to the nation's musical output, but became an inspiration to many Jamaican group-singing aspirants. The late Brent Dowe, leader of the popular 1960s Jamaican vocal trio - The Melodians, explained to me in an interview: "Groups were the order of the day - The Four Tops, The Impressions and so on, and so we became a group. At the time, the whole emphasis was on harmony, not on the lead singer. Harmony was the thing and that's why I had to sing in the background many times."

The Drifters were winning hearts in Jamaica, even a year before Jamaica's Independence, with songs like This Magic Moment, Dance with Me, Save the Last Dance for Me and There Goes My Baby. The last cut was an ever-present selection in jukeboxes across the island and almost invariably had fans singing along to the lyrics:

'There goes my baby, moving on down the line,

I broke her heart and made her cry

Now I'm alone, so all alone,

It was the first big hit for them after they regrouped in 1959 with Ben E. King as lead vocalist. It also became an instant million-seller, a landmark one as well, having the inclusion of a string section in the musical arrangements. In a memorable performance at The Regal Theatre in 1960, The Drifters thrilled a massive audience of several thousands. Lead vocalist King, no doubt inspired by enthusiastic fans, made several return trips to the island for shows and vacations. In the meantime, The Drifters continued to make their presence felt with a No.2 placing on the Jamaican hit parade charts in March 1964, with a slow piece sung by Rudy Lewis and titled Vaya con Dios.

One Way Love, sung by Johnny Moore, reached the top 10 of the Jamaican charts in August of 1964. But perhaps their greatest impact was with the double-sided hits, I Don't Want to go on Without You and Under the Boardwalk, which interchangeably occupied the No.1 and No.2 spots on the charts, all at the same time. This record-breaking feat was achieved on only one other occasion, with the Maytals' Daddy and It's You.

But with all the heroics of The Drifters, The Impressions, led by Curtis Mayfield, may easily have been the American group that made the greatest impact on Jamaicans and Jamaican singers, and indeed complemented, and to some extent influenced, several Jamaican recordings. Riding high on the strength of Curtis Mayfield's compositions, the group became one of the first to sing about African-American pride and community struggle in the recording, Keep on Pushing, in 1964 at the heights of the Civil Rights Movement. It was a topic that Bob Marley would later promulgate in his 1970s recordings and one that Jamaicans would naturally embrace.

It wasn't surprising, therefore, when Marley lifted lines from The Impressions' People Get Ready in 1965 to help populate his anthemic song of the century: One Love. Other hits by the group that were very popular in Jamaica during the early-mid 1960s were, Never Let Me Go, Minstrel and Queen, Grow Closer Together, I'm So Proud and Gypsy Woman in 1961 - a song that was inspired by a cowboy movie in which a gypsy woman was dancing around a fire. It was the group's first hit with Mayfield at the helm.

The Jamaican group, The Techniques successfully covered Minstrel and Queen for the Treasure Isle label in 1967 and renamed it Queen Majesty, and later recorded You Don't Care for the same label by lifting lines from The Impressions' You'll Want Me Back.

The impact of The Impressions on Jamaica's music culture continued at Studio1 with the Mad Lads' cover of Ten to One, and The Wailer reworking, Just Another Dance. Pat Kelly had a version of The Impressions' Soulful Love, and The Uniques copied My Woman's Love, I've Found That I've Lost and Gypsy Woman. The Heptones cover of Choice of Colours reinforced Mayfield's commitment to the black-freedom movement of the 1960s.

The Temptations' story began in 1961, the year in which Jamaicans Eric 'Monty' Morris and Prince Buster launched their entertainment career with Humpty Dumpty and They Got to Go, respectively. After two unsuccessful singles, the group debuted for Gordy Records in 1962. They didn't, however, make a real impact until 1964, when the Smokey Robinson-penned-and-produced song, The Way You Do the Things You Do, rocketed into the charts. The following year, they recorded their first million-selling single, My Girl, which was covered by the Jamaican Slim Smith and others.

Slim Smith also had a successful cover of The Temptations' Ain't Too Proud to Beg for producer Bunny Lee in 1968.

The Temptations continued to crank out hits like Beauty is Only Skin Deep, Since I lost My Baby and I Wish it Would Rain, in the late 1960s.

Although they had several hits, it took just two songs by The Four Tops to win the hearts of Jamaicans during the 1960s. The Same Old Song and I Can't Help Myself (Sugar Pie Honey Bunch) rode the charts for weeks. The last cut was a romantic plea for help:

'Sugar pie, honey bunch, you know that I love you

I can't help myself

I love you and nobody else.

In and out my life, you come and you go

Leaving just your picture behind

And I've kissed it a thousand times'.