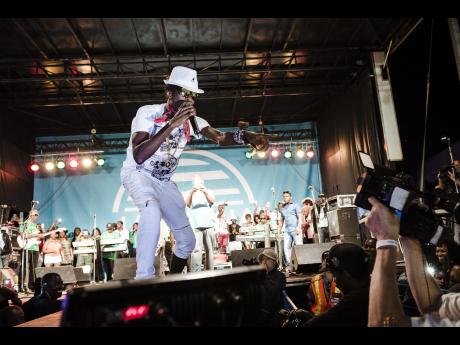 Contributed
Gully Bop had the audience eating out of his hands at Jambana. 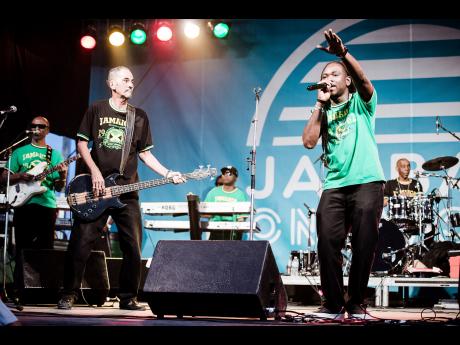 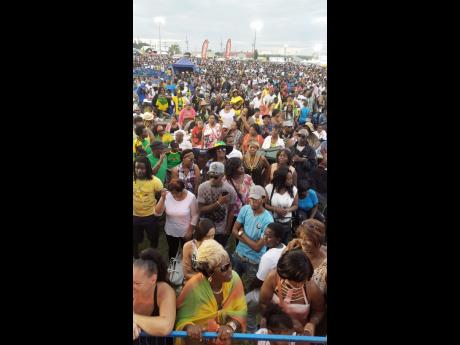 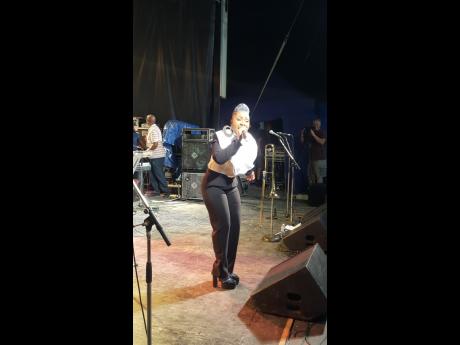 Hours before severing ties with his management team, without any apology, Jamaica's new dancehall sensation, Gully Bop, was declaring he was the 'Freestyle King'.

Bop, who rose to fame last December during a well-touted clash that did not happen between himself and Ninja Man at the annual one-night stage show, Sting, was performing to no less than 10,000 patrons at the recent Jambana One World Festival in Markham Fair Grounds, Ontario.

Now in its seventh year, the annual festival, organised by Jones and Jones, had attracted a crowd that came with one intention in mind, to hear Bop utter the words, "Ninja Man nuh bad like me".

A master of stage performance, the DJ brought his props, which included a run on the restricted area, and the selection of random persons in the crowd to help bolster his set.

Interacting and touching those in awe of his presence, the self-appointed 'King' won over the audience that seemed satisfied, no matter what he uttered.

The night belonged to Gully Bop, however, his appearance on the Canadian stage was bolstered by a young female artiste who others are now paying a lot of attention to - Ikaya.

Fresh from her brilliant performance at the recent Reggae Sumfest in Montego Bay, Ikaya, who was one of three acts on the VP Records 'Next Big Thing', sponsored by Digicel, made her presence felt in the massive Markham grounds.

Wearing a blue mohawk hairdo, the songbird, sounding a lot like Tanya Stephens, brought a different kind of vibe to Jambana.

Young rising star Dalton Harris, who will have to adopt a nickname if he wants to survive in the dancehall rat race, also succeeded in bringing the vibe to frigid conditions left by Colin 'Iley Dread' Levy.

Harris, the 2009 Digicel Rising Stars winner, was performing to his largest-ever audience. Unlike the veteran that preceded him, he showed great potential.

As exciting and up-to-the-minute as Gully Bop was to the Canadian crowd, it was Fab Five, the band of all seasons, that brought inspiration and the musical medicine that the doctor prescribed. With ease, the party band proved their prowess and reiterated why they had survived so long in the competitive marketplace.

At 8:45 p.m., hours after the all-day affair started, it was the Frankie Campbell-led team that delivered a funky reggae party.

Between their rendition of Under Mi Sycamore Tree and the impressive catalogue that they pulled from, Fab Five lit the grounds of Markham.

Fab Five's performance was heralded by Duppy or a Gunman (Ernie Smith), who had the older members in the audience rocking. Smith's Freedom Street, Pitta Patta and My Pretty Little Queen got the people who waited for his appearance to play the role of backup singers.

Dubbed the largest event in the Jamaican diaspora, Jambana had a standout artiste, a young, Canadian-Italian white boy by the name of Lucas Dipasquale, who proved reggae's universal appeal was growing.

The 20-year-old shocked the audience to attention with Popcaan's Road Haffi Tek On and Only Man She Want, warning them not to compare him to the average white guy.

Dipasquale, who has been working with Big Ship's Stephen McGregor, described the opportunity to perform to the packed park of Caribbean people as "one of the coolest experiences in my life".

Four-time Juno (Canadian Grammy) winner Exco Levi did a tight set and connected with the audience as well.

There was no absence of the Holy Spirit at Jambana, as throughout the day, the cultural, music, dance and food event was filled with praying pilgrims, who took every opportunity to ensure the presence of the Lord.

Prayer was interspersed with the performances throughout the event.

Montego Bay's Junior Taylor, of Complete Entertainment Services, was the technical producer of the mega event. Taylor flew into Canada to oversee the production.