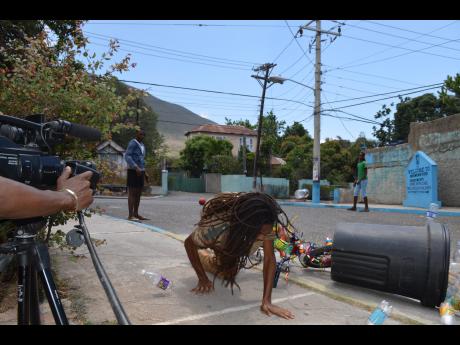 Contributed
Shooting of ‘The Epiphany’, where Kaleb D’Aguilar plays the main character. 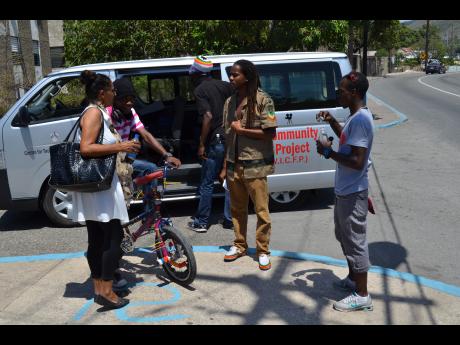 Nestled in the hilly terrain of Kingston is Mountain View, a community which is in the news, often not for the right reasons.

"I have been living in Mountain View for 40 years," Dave Wilson said. "There is a lot of stigma attached to our community, based on different types of things happening here."

This stigmatisation is what Wilson wanted to change.

"Mountain View is a wonderful place that has historical and geographical factors, but what is highlighted is only the negatives," he said.

Armed with this idea, Wilson started to search for a story that was unique yet pertinent to the community ... and then, The Epiphany struck.

Last year, Wilson got a chance to channel his creativity and learn the basics of film-making, which is where the idea to make a film germinated in his mind.

"I was speaking with a friend attending the HEART Trust culinary programme, he told me about the Community Film programme at the University of the West Indies (UWI)," he said. "I joined the programme, it was exciting ... I want to learn everyday."

Wilson said he got to know about GATFFEST (The Greater August Town Film Festival), which showcases films produced by the students and community members of the UWI Community Film Project, and decided to make a film for the festival.

"Based on the fact that this was my first time, I was interested to learn," he said. "I heard Professor Ian Boxill (professor of management studies and director of the Centre for Tourism and Policy Research) talking about a film on Nanny of the Maroons."

So the right ingredients were selected and sprinkled to form the plot of the film.

"I decided to make a film around Jacques Crescent and Marcus Garvey's second wife, Amy Jacques Garvey," he said.

"I was enthused and excited," he said.

Wilson wrote the script and directed the film - he was assigned a team with Eka Patterson as the mentor, who also co-wrote and directed the film, and Mellissa Tulloch as coordinator. The production team consisted of Bianca Fagan and Francena Pryce; while Taj Christie was the cinematographer and co-writer; Akeem Lee, the editor; and Marshe McAnnuff, the production assistant.

The Epiphany, a drama, revolves around Zephaniah, who comes home to find that his girlfriend, Lara, has left with her son, and left behind a book, The Veiled Garvey.

"This young man (Zephaniah) lives in the rural area, he leaves his job as a postman and decided to take his life forward as a Rastafarian," Wilson said.

He reads the book and then heads out to find out more about Amy Jacques Garvey ... he is involved in an accident across from the ruins of Jacques Garvey's house and is knocked unconscious.

The story unfolds where Zephaniah has an illusion and meets Amy Jacques Garvey - the journey to get some questions answered commences.

For Wilson, this is a beginning, the seeds of film-making now have been germinated, and he plans to grow and nurture this plant. He said he wants to use this medium to highlight and engage in social commentary.

"I see myself as a major player in the industry, directing wonderful movies, community issues and community development," he said. "I want to expose myself, my community and other communities to the world, as they are not talked about in the way they should be."

Despite the challenges and the not-so-positive perceptions about his community, Wilson is hopeful. "We are a blessed country and we have so much to offer," he said.

Films, in his opinion, can make that social change; they can spread the message across the world and bring together like-minded people to infuse positive energies.

"I want to say the things that I want to say, as I have a medium to say it," he said. "We are at the backbench and the bench is falling off and there is nobody there to catch it."

The future belongs to those who believe in the beauty of their dreams, said Eleanor Roosevelt, Wilson is trying to make those dreams become a reality.