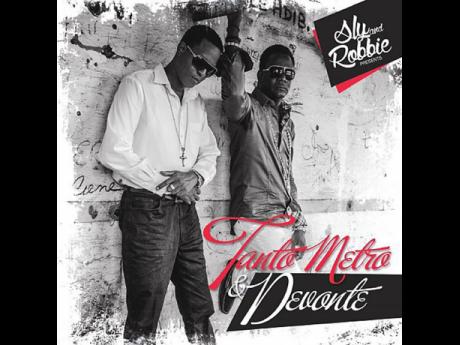 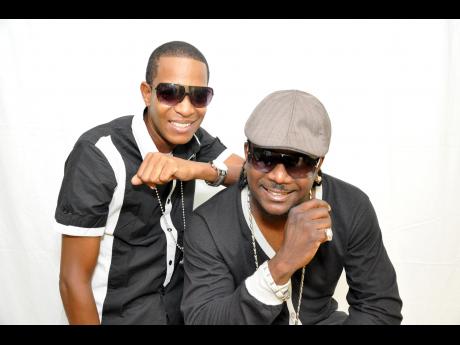 Tanto Metro and Devonte are approaching 20 years as an official duo after solidifying their musical bond with the Billboard-charting Everyone Falls in Love, recorded in 1997. It was also the name of their first album, done for Donovan Germain's Penthouse label. Eighteen years after that hit single, the two have combined with another duo to make their latest album, which has the name of all four on the cover - Sly and Robbie Presents Tanto Metro and Devonte. The 10-track set starts with The Jam and ends with a song with a name which has echoes of their enduring first hit, Falling in Love. Among the songs on the set are Hey Ya, Hey Ya (featuring Yellostone), a remake of There's a Reward (featuring Bunny Brown), Maybe I Love You, Ruff Stuff, She Ran Away and No More.

As far as the content goes, though, Devonte outlines a project which combines the four primary forces, along with the talents of many others who worked on the album, to come up with an eclectic set.

"We had several singles before, but this is the first full-length album with Sly and Robbie," Devonte told The Gleaner. The famed production duo's presentation of the singer/deejay duo has been some time in hitting the streets, as initially, there should have been a 2013 release.

"This is the same album, but we had to reshuffle, revamp everything and throw away some old tracks, put back some new tracks, so we couldn't title it the same way," the singer said.

A lot more material was recorded than the 10 tracks eventually released. "What we looking for is a variety that can please everyone," Devonte said. "I think we made a good choice with the 10 tracks."

The Gleaner suggests that by the marker of many albums, Sly and Robbie Presents Tanto Metro and Devonte is numerically low. Devonte pointed out that their previous albums have had more tracks, going up to 16 and 17, with their first having 14. Still, they had not done an album since 2006, and "we decided we did not want to make it long. We wanted to get to the point - short and spicy for the listeners. And we know that from what they will be hearing, they will be craving for more".

A follow-up is naturally in the plans. "We grow each day musically," Devonte said.

Musically, the album shows a number of influences, not least among them a Latin flair that befits a duo which has generated traction in South America.

"We never wanted the normal thing in dancehall or the normal thing that reggae music has to offer. Fusing what Sly had to offer and our style, this is what came out, so we capitalised on it for the rest of the album," Devonte said.

"We sent it in many directions. We did not stay one place."

He also said that there is serious thought to what the audience wants to hear, not only already established fans worldwide, but also the new listeners. And he points out that "we are performers ... . That versatility has carried us far and near".

Devonte pointed out that they have been performing songs from the set, describing Hey Ya, Hey Ya (which they said charted in Colombia) as a "crowd-mover". Consistent throughout the album is a theme of male-female relationships, Devonte saying that the duo has consistently appealed to the ladies. As Tanto Metro puts it, "Me and Devonte have a gel where the girls are concerned. We keep on that trend, for we always cater to the females."

However, he said that for Sly and Robbie Presents Tanto Metro and Devonte, there is a twist.

"We go to the Latin market, we go to the African market, and we go to the one drop market where Europe is concerned. We go hardcore, but not that hardcore - deep," Tanto Metro said.

In the songwriting process, Devonte said, "it is what the music tells us to sing about".

"At the end of the day, I think the fans want to sit down and listen to a well-composed set of music from their special act. An album is very important in that," Devonte said. Tanto Metro added that it is especially important for people who love music.

"We love music overall, and Tanto and Devonte, we have something so special as a duo, it different from everybody else in the music business," he said.