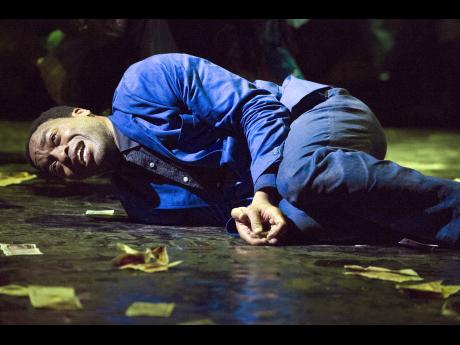 Contributed
BAFTA winner and Academy Award nominee Chiwetel Ejiofor is Everyman in the play of the same name. 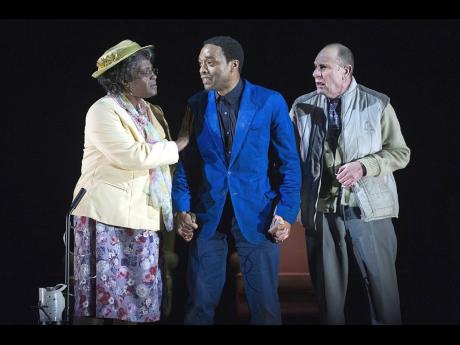 It shows at Palace Cineplex and Palace Multiplex on Sunday, at 11:30 a.m.

One of the great primal, spiritual myths, Everyman asks whether it is only in death that we can understand our lives. A cornerstone of English drama since the 15th century, it now explodes on to the stage in a startling production with words by Carol Ann Duffy, poet laureate, and movement by Javier De Frutos.

A multi-award winning theatre director, Norris brings a wealth of experience and talent to his role as the new boss at NT Live and, by all accounts, has scored big in his debut presentation, Everyman.

He said “When I was thinking about what show to open a new regime, it felt important to do something quite bold, to throw the gauntlet down and say, ‘OK folks, it’s gonna be a little different’. Everyman is one of those plays that people know of but no one’s ever seen.

“And the reason they’ve never seen it is because the original is pretty turgid. It’s quite a hard work, but it is an absolute cornerstone of dramatic tradition. That is because it’s really a primal story of somebody trying to escape, but not succeeding in escaping death, but it needs a version, strong contemporary take on that,” Norris continued.

“So my associates and I thought of who would be good for that? And it felt like it had to be a poet, a good strong narrative poet that might grab it and bring it into now. And of course you don’t go very far. Who is a poet laureate?” Norris asked.

For Norris and his team, the choice of Dame Carol Ann Duffy, Scottish poet and playwright, was obvious. She is a professor of contemporary poetry at Manchester Metropolitan University and was appointed Britain’s Poet Laureate May 2009. Her script has been described as being “rock and roll, extraordinarily funny”, lending resonance to the seductive spectacle of the arena in which Everyman unfolds.

Lead character Chiwetel Ejiofor, who gives a commanding performance, is equally enthusiastic about the production. “When people ask me for recommendations on shows to see, I nearly always reply with 'Well, what do you like?' because theatre is always horses for courses. Maybe you like Shakespeare, maybe you don't. Maybe you like musicals, maybe you don't. There's something out there for everyone and personal choice, personal preferences, shape everything," Ejiofor said.

"But then, occasionally, just occasionally, a show comes along that is so exciting, so dynamic, but so profoundly moving that, irrelevant of personal preference, I just say, 'Go see this show. Go see Everyman'," Ejiofor said.

"The play, by definition, is about a man having been forced into a conversation with God. The Olivier as a stage, seems like one of the few spaces that you could have that kind of epic conversation. But the events surrounding it have to feel large and, by their very nature, have a kind of an event quality. An audience will have an experience that is quite visceral and engaging," Ejiofor continued.

"I think and they will also come away with ideas and questions about life and about death and the thoughts that we have about those things and what our communications is, be we religious, atheist or agnostic, what our communication is with our own spirituality and our sense of life and its full meaning. The play registers on all those levels, as well as being a very energised, dynamic and dramatic piece of theatre."

"I think it's also something that is very thoughtful and is considering some of the larger questions," Ejiofor concluded.

For his part, the director, Norris, sees this production as an important one, on many levels, and one that, indeed, appeals to every man.

"As an opening statement we wanted to go 'here we are, this piece is for every man'. A young student will come in and enjoy this piece hopefully as much as an academic who is happy to see this hugely important part of our heritage being brought to a new audience," Norris said.

Obviously moved by overwhelming audience responses to the performances, Norris described what he termed a "wonderful thing that happened during the previews".

"That's what it's about" said Norris. "I wanted it to be a piece of theatre that nobody, but nobody, felt excluded from. I don't want anyone ever to think that they can't come to this play because they think it's not for them."

The series continues with Hamlet, starring Benedict Cumberbatch, for which the date is to be announced soon.

Tickets are on sale at the box offices of the Palace Cineplex and Palace Multiplex and via the web at www.palaceamusement.com, with a Palace Card.