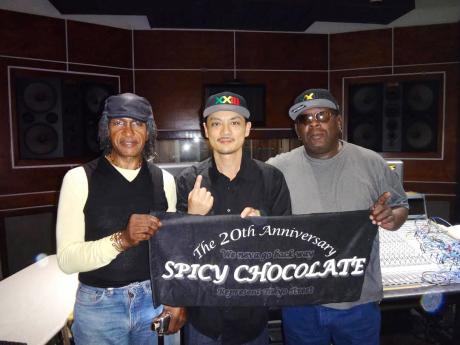 Contributed
A representative of Spicy Chocolate (centre) with rhythm twins Sly and Robbie. 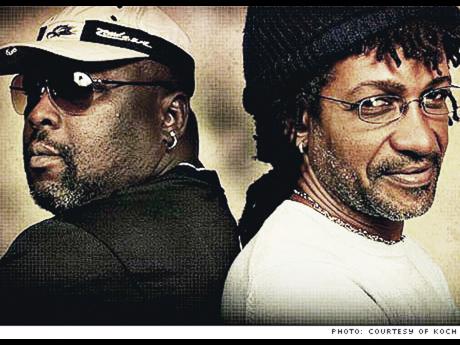 Legendary rhythm twins Sly and Robbie and Japanese production outfit Spicy Chocolate have joined forces with Tuff Gong International to give the world a dose of The Reggae Power 2, which is a compilation album featuring several top-class reggae artistes.

Sly and Robbie have a well-documented musical connection to the founder of Tuff Gong International, the Hon Robert Nesta Marley. This project reveals that the Marley and Sly and Robbie connection is still very much active as both Taxi and Tuff Gong have managed to bring together a strong line-up of recording artistes, including Morgan Heritage, Demarco, Shaggy, Maxi Priest, Cherine Anderson, TOK, and Tuff Gong's newest artiste Skip Marley.

The project is being promoted under the title Sly & Robbie and Spicy Chocolate Presents the Reggae Power 2 and is slated for a September 18 release. The album is a follow-up to the previous Grammy-nominated effort with the same title and contains exclusive music, which is all produced by Sly & Robbie in collaboration with Japanese reggae group Spicy Chocolate.

According to Robbie, he was drawn to Skip Marley's break out single Cry to Me, and, therefore, saw the need to add the effort to the album's final cut.

"Once we heard Skip's record, Cry to Me, we knew that we wanted to try and involve him in the album. Young artistes like No-Maddz, Romain Virgo, and Skip are the future of our music, and it's good when we can bring all of them into such a project as this," he said.

Producers Spicy Chocolate is a popular musical trio based in Japan, and they have expressed pleasure working with Sly & Robbie.

"We are honoured to collaborate with the legendary Sly & Robbie (on this project), which is a follow-up to last year's Grammy-nominated first installment. It is only fitting that our label of choice is none other than Tuff Gong, home to Skip's grandfather and icon Bob Marley," Spicy Chocolate told The Gleaner.

The album also features three-time Grammy Award-winning, Latin fusion artiste Ozomatli. However, Tuff Gong says the collaboration is merely an indication of what is to come as it relates to carrying out Bob Marley's dreams.

"Tuff Gong is pleased to be able to add this project to our roster of releases for this year. We look forward to working with Taxi and all of the artistes involved to promote the album both in Jamaica and abroad. This year is shaping up to be a significant one for us as we celebrate our founder's 70th birthday by partnering with some of Jamaica's best and brightest talents. Between the launch of the Master's Vault series, distributing a new album from Teflon, our first-ever comedy album Breadfruit Tree (featuring Iceman), and now Taxi, we are indeed demonstrating the power of reggae, Bob Marley's vision for Tuff Gong, and the entire Jamaican music industry on a whole," executive label manager for Tuff Gong Myshjua Allen said.