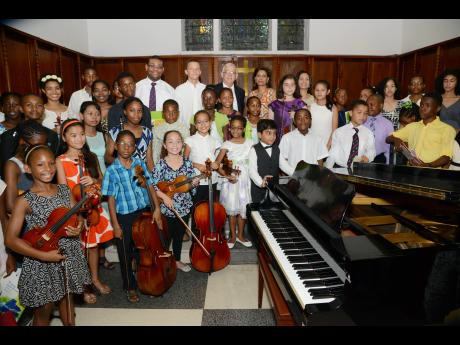 Contributed
The talented performers at the Associated Board of the Royal Schools of Music (ABRSM) annual High Scorers’ Concert, recently.

The Associated Board of the Royal Schools of Music (ABRSM) annual High Scorers' Concert was held recently at the University Chapel, University of the West Indies, Mona.

The first High Scorers' Concert was held in 1989 as part of the ABRSM's centenary celebrations. Master of Ceremonies at this year's concert, Kathryn Lawson, the ABRSM representative for Jamaica, noted in her opening remarks that. "These concerts are particularly important as they give young musicians an opportunity to share their achievements with a wider audience than the examiner in a supportive and celebratory setting, while providing a forum for teachers to meet informally and enjoy the results of their hard work and dedication. Our goal is the development of the total musician. In keeping with our commitment to support music-making and remaining culturally relevant, we have recently introduced a number of technological products which will assist teachers and students in achieving their goals."

These schools are accredited to award graded exam and diploma qualifications annually. In 2008, they celebrated their centenary of conducting examinations in Jamaica. Their aim is to "motivate musical achievement through our authoritative assessment of students, the professional development of their teachers, and a wide range of published resources. By delivering our exams rigorously and consistently, we set the worldwide gold standard with more than 600,000 people in more than 90 countries, choosing to take them every year." (www.abrsm.org).

The examiner for this year was Stephen Ellis, who administered examinations in several disciplines throughout centres in Kingston, Mandeville, and Montego Bay.

Lawson announced two new and exciting partnerships. The first is with First Global Bank (FGB) and their 'Perfect Pitch for a Sound Education Programme' in collaboration with the Ministry of Education, which will see the ABRSM providing guidelines, standards and examinations for music teachers and others who are teaching music in an integrated way.

The second is with the Jamaica Cancer Society and the ABRSM Jamaica Practice-a-thon initiative, which will encourage instrumental practice, with all proceeds going to the Jamaica Cancer Society for use in cancer treatment for young people up to 21 years, and to build awareness about cancer in our youth. Performances of a very high standard made for an extremely enjoyable evening and topscorers in each discipline received prizes, which were presented by the Hon. Ronald Thwaites.

The highest overall mark went to Eleanor Hind, violin, with top marks for piano, cello, guitar, viola, and clarinet being awarded to Aaron Thwaites, Isabel Chen, Liu Ayton, Jada Walker, and Kristen Ferguson, respectively. The highest grade was awarded to Dayna Palmer - violin. An award for The Most Impressive Performance of the evening was given to 12-year-old Joseph L.F. Davis (Grade 8 Piano) for his wonderful rendition of the Allegro con spirito - third movement from the Sonata in G by Clementi, while the award for youngest distinction candidate went to Jada Walker (Grade 3). The Grand Finale, J.S. Bach's Adagio - from the Sonata in G, was outstanding and featured violinists Emma Wynter, Zachary Chen, Akela Clarke, and Amy Hussey.

Heading the list of attendees was the Hon Ronald Thwaites, minister of education, and Mrs Thwaites; Burchell Whiteman (himself a former minister of education) and Mrs Whiteman; other distinguished guests, as well as the families, teachers, well wishers and friends of the art, who were treated to outstanding performances by students from across the island.