"It was worth it" - Emancipendence borrower has no regrets 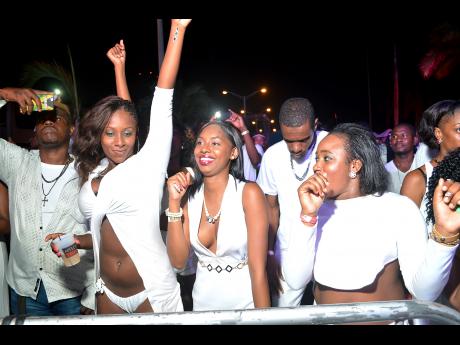 Heavy criticism and public outcry was the result of last Sunday's story which highlighted the millions of dollars issued by a financial company to indivi-duals to facilitate their partying lifestyle.

However, despite the tongue-lashing and the questions of prioritising which followed the revelation, at least one partygoer who benefited from the loan has come out in defence of her actions.

Undeterred by the brutal comments, Nicole Lewis* told The Sunday Gleaner that the experience was definitely worth it and that she would be open to borrowing again next year.

Lewis, who took advantage of the micro-lending loan service offered by Sprint Financial Services Limited, said she had no regrets about taking the loan for party purposes and was even willing to recommend it to friends.

In an article published in last week's Sunday Gleaner, it was revealed that upwards of $2.5 million (possibly more) in loans was disbursed to partygoers from one lending agency.

It was also revealed in last week's article that the majority of applicants were mainly young professionals from the middle to lower-upper-class socio-economic bracket, of which Lewis finds herself a part.

"I work a regular 9-5 job and I wanted to go on the north coast for the Emancipendence period. I didn't have the cash upfront, so it made sense to borrow the money," she said.

Lewis, who is 35 years old and works in the private sector, disclosed that her regular expenses includes her car payments, mortgage and a nanny for her son, whom she pays weekly.

"I initially wanted to borrow $50,000 but I only got $30,000. This was used to offset expenses for tickets, outfits and car rental. I have between six to eight months to repay the loan and the rates are not bad."

Last week's article attracted hundreds of comments, the majority of which lashed out against party loan borrowers on social-media platforms, labelling them as "careless", "irresponsible" and "worthless". Lewis, however, was unfazed by the scathing remarks, informing The Sunday Gleaner, "to each his own".

"You have to assess who the persons are that are making these comments. Older persons would say that it is a waste of money, but to me, this is a once-a-year thing. I don't see what the big deal is, I don't see the problem. It was worth it," she said.

To further make her point, she added that many persons borrow money to do breast augmentation, facelifts and other surgical procedures and that this was no different.

"The average Jamaican can't afford to just find money to go. I do it because I work so hard throughout the year and I just wanna enjoy myself, plus it basically doubles as a vacation," she told The Sunday Gleaner.

When questioned if the sacrifice of her now having an added expense to repay for the next few months was worth it, Lewis responded with a resounding "Yes!"

"It was really good and I enjoyed myself immensely. Once you have a job and you are able to budget to repay the loan, I don't see a problem. If by next year I don't win the lotto, I'll definitely think about borrowing again. I would recommend it to others. You borrow, you pay it back, there's nothing wrong with that."