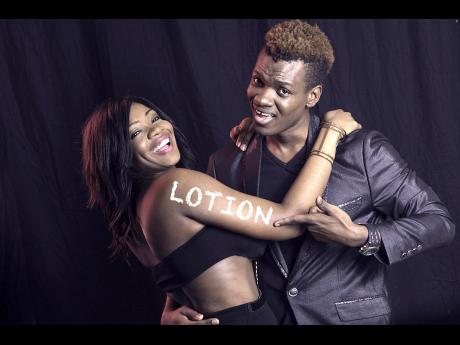 Contributed
Camille Davis (left) wears Lotion on her arm, literally, as she laughs with Dutty Berry. 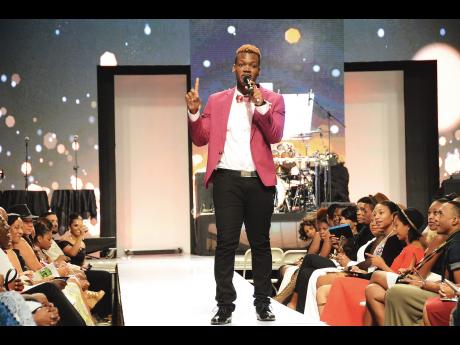 File
Dutty Berry on the stage at Pulse’s Caribbean Fashion Week at the National Indoor Sports Centre on Sunday, June 14. 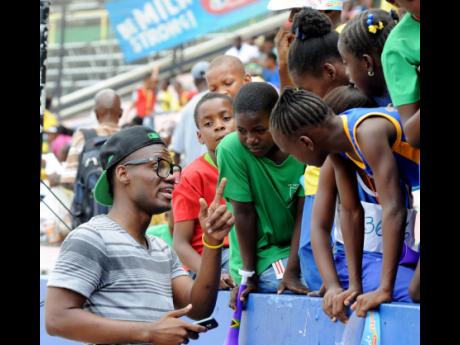 Ian Allen
Dutty Berry entertains children during the Primary Schools Atlethics Championships on Saturday May 2, 2015, at the National Stadium. 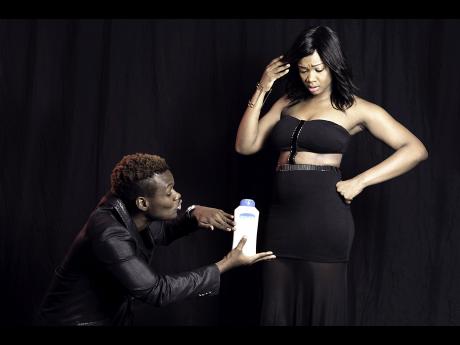 Contributed
Dutty Berry offers a container of his potion to Camille Davis.
1
2
3
4

His catchy video blogs led him to fame; his wit and charm enchanted Jamaicans locally and abroad; and, before he even had time to take it all in, Dutty Berry became an Internet sensation.

He enjoyed success with his video blogs, which opened many windows of opportunity for the young entrepreneur, but in recent times, it seemed like Berry had fallen off the Internet circuit. However, Berry has come back with a bang and is once again creating a buzz on the Worldwide Web when his latest project quickly went viral.

Serving as the official Jamaican parody of Trey Songs' international hit Slow Motion, Berry's latest project tilted the social media world on its axis, making users dizzy from uncontrollable laughter. Many used social media to congratulate Berry on the video, while expressing how hard they laughed while watching it. The catchy video, titled 'Lotion', has already garnered thousands of views and hundreds of comments since its release via YouTube two Saturdays ago and has also been shared numerous times on Facebook and other social media platforms.

According to Berry, the project highlights an issue many Jamaicans struggle with, which is dry skin. He told The Gleaner that the idea for the parody came while he was in the company of a friend who needed some lotion. Berry explained that while the two were together, the Trey Songs hit Slow Motion came on, and immediately, the words for his parody started surfacing.

Berry explained the reason behind the title, stating that he wanted to give it a name that would pique persons' interest. "The title is 'Lotion', and it was a no- brainer," he said. "It will get people talking because it just sounds so random that it will immediately generate interest."

Not only is 'Lotion' hilarious, but it also packs some heavy star power. It includes input from the likes of Camille Davis and Sharee Elise, two of the popular actresses in the local theatre business. Explaining how he secured the opportunity to work with Davis, Berry said, "We are both Sabritru (a clothing store in Downtown, Kingston) ambassadors and had planned on doing a video to promote the store, but we did not get do it. So when the idea for the parody video came up, Camille was the first person who came to mind, and her being attractive was also a plus."

The production quality of the video is also noteworthy as the picture quality is clean and crisp. Berry said he insisted on that quality as he wanted the video to be of the best. The setting for the different scenes at the video also added to the storyline. The club scenes were shot in the luxurious Fiction nightclub and there are scenes in an exquisite Beverley Hills residence.

Although Berry said he had no expectations for the video prior to its release, he is happy that it's doing well. "I had absolutely no expectations, I just wanted it to do well online and go viral," he explained. "I am very fortunate to do what I do, and so I am always excited to share my vision and my art with people who are willing to watch," Dutty Berry said.