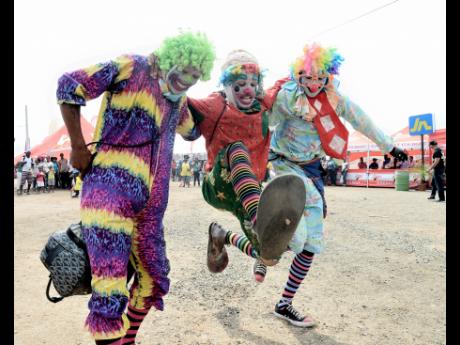 Ian Allen
It was all fun and excitement as these clowns danced up a storm during the Region 1 Pan Chicken Championship at the UDC Car Park in Portmore on Saturday. 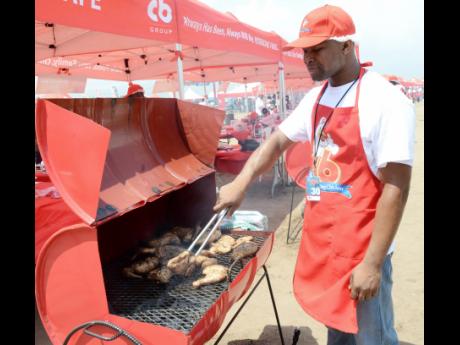 Ian Allen
Pan Chicken festival for Region 1 turns up the heat in Portmore.
1
2

The CB Pan Chicken Championship is one of the most anticipated food and entertainment experiences in the island and on Saturday, scores of Jamaicans descended on the ground of the UDC car park in Portmore for the first regional elimination for the 2015 competition.

This year marks the 10th anniversary of the competition and the organisers kicked off the celebrations in style. There was non-stop fun and excitement from midday to

8 p.m. Patrons not only enjoyed mouth-watering jerk chicken from the day's competitors, but they also indulged in a host of other activities, like the Monster Milk Kids' Village and Flow's wheel of prizes. The former was a hit with the children, who joined long lines and waited their turn to enjoy the many rides, including the ferris wheel and bounce-a-bouts. Face-painting was also a big hit in the village as the hired clowns walked around transforming children's faces into that of their favourite cartoon characters.

The kiddies village and the Flow wheel of prizes were not the only source of entertainment; there was a lot of action to witness on stage as well. Emcee and comedian Pretty Boy Floyd did a great job of keeping the crowd engaged from start to finish. Up to his usual antics, the comedian had the audience in stitches as he showed off just why he was one of Jamaica's most outstanding comics.

His impromptu singing and dancing competitions kept the crowd thoroughly entertained. The audience members who were brave enough to participate in the different onstage activities were left smiling as they exited the stage with prizes.

By 6 p.m., the crowd gathered closer to the stage for the start of the evening's concert, which featured the likes of Agent Sasco, Goddy Goddy and Ding Dong.

Goddy Goddy was the first to touch the stage. The gospel singer made it clear from the beginning that he was not just there to perform, but was also there to deliver a message - and that he did. In between delivering some of his well-known songs, the entertainer, who is also a pastor, prayed for the creator to send a blessing for every member in the audience. The shouts of 'hallelujah' that echoed throughout the venue following the prayer was how the audience showed their agreement with his words. The audience enjoyed his set so much that they requested an encore performance and he obliged. He made way for dancer-turned-deejay Ding Dong.

The energy inside the venue was brought to a whole new level as soon as the Syvah singer made his entrance, and that energy was maintained right throughout his performance. Delivering hits such as Syvah and Gas and Lowe Mi Nuh, Ding Dong and his Ravers had the audience dancing up a storm. When he made his exit, members of the audience could be seen wiping sweat from their faces. He made way for Agent Sasco.

He, too, delivered a stellar performance and kept the audience's energy level at its peak until the concert ended. Delivering songs such as Same Ting Again and Idiot Ting Dat, Sasco had the audience captivated from start to finish. The next CB Pan-X elimination will be on September 26 in Montego Bay and the grand finale will be at the Kingston waterfront on November 1. Both events are free.