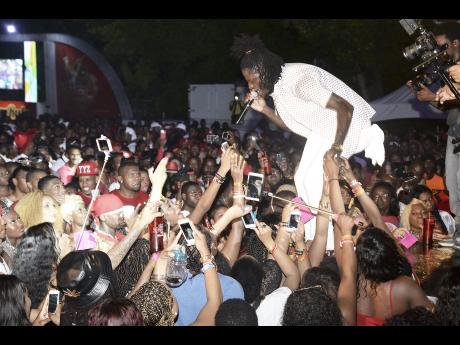 File
Aidonia had the audience captivated during his ‘Celebrity Playground’ performance recently. 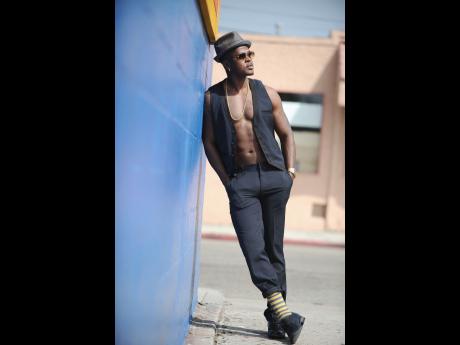 It was a hot topic for weeks and was such a fiery debate that it earned the attention of veteran deejay Bounty Killer. In a recent television interview, the 'Warlord' sought to shed some light on the issue, but his comments only added fuel to the fire. In the interview, Bounty Killer compared Aidonia to Vybz Kartel, saying that both artistes were on the same level, but one is rated higher than the other. He analysed both artistes, saying that although Aidonia is a better performer than Vybz Kartel and is on equal terms with 'di Teacha' lyrically, Aidonia remains in the shadows.

"Kartel and Aidonia are very similar lyrically and vocabulary-wise, but it is more than just lyrics we are describing Kartel by," he said. "He (Kartel) is very influential not only with his music but in his way of life. If you look at the people you see it," he said. "There is no denying it. Even if you don't think Kartel is the best person and he might have done some negative things, he is very influential and that is key because when music stop play, you need to get into people's head same way." He went on to say that Aidonia doesn't get the attention he deserves because he is not a controversial artiste. "He's just not that controversial. Him nuh do the crazy things that Kartel does, so him nuh get that attention or look as influential, but musically he is as good as Kartel."

Since Bounty weighed in on the issue, other entertainers have been voicing their opinions about the topic. One such person is Gage. The entertainer burst on to the scene about three years ago and has managed to remain on the lips of many. No stranger to controversy himself, the entertainer said that while it is true that controversy sells and artistes should deejay on sensitive issues every now and then, it is not the only reason that allows some artistes to be rated higher than others.

"Controversy has a lot to do with remaining relevant, but talent and hard work is what makes the difference," he said. "You can be a controversial artiste but you will only be on top of things for a time if you don't have the talent or you don't put in the work. Controversy sells but only for a time." He listed Munga Honourable, Gyptian and Shawn Storm as underrated artistes, in his view. He says these artistes have the potential to be very big, and while they may have had big hits, some of them remain in the shadows because their work ethic or approach to the business is wrong. "In this industry, you have to be working continuously, you can't afford to stop or take a break, because it may be difficult to bounce back and your career can go downhill very fast. That's why I keep working to make sure I stay on top."

As for Mr Vegas he says, "I don't have a problem with being underrated. Lots of artistes that get false ratings are forgotten after two years. I have songs that people will be singing forever."

Keona Williams of Heavy-D Promotions has worked with many entertainers throughout her career, including controversial artiste Tommy Lee. She has, however, disagreed with Gage, as she doesn't believe an artiste has to be controversial in order to remain relevant. "I don't believe you have to be controversial, but you must be interesting and unique," she said. "It's easier when you possess that star factor, where once you step into a room you stand out." She listed Assassin, Aidonia, Khago, Shane-O, Vanessa Bling and Destiny as some of the entertainers she believed to be underrated. "They are among the artistes who do not receive the credit they truly deserve. I see them as champions who can and should definitely dominate the industry."

While naming these artistes as big stars in her eyes, Williams pointed to some of the reasons why they may not get the attention they deserve. "I'm fully aware that there are many factors that contribute to overall success." Having the right team is key, she said, pointing out that artistes like Shabba Ranks, Sean Paul and Shaggy have all proven how far an entertainer can go with the right team. "It's also no secret that personality and having the ability to have fans identify with you, as is the case with Kartel, is also a factor. He (Kartel) represents for a mass of the population, regardless of what we consider to be right or wrong," she said, reiterating the points made by Bounty Killer earlier.

She also listed reasons why some artistes 'nuh buss bigger'. "I believe it also has to do with some persons not understanding that the music is a business. Not wanting to hire an experienced professional and choosing the cheaper route out to handle your affairs; insisting on trying to maintain an entourage around with none having the ability to contribute positively to your success; and wanting to make your own rules on compensating the people who are working to ensure your operations remain afloat."

Having worked with artistes like Spice, Etana, Tommy Lee, Chuck Fenda and Elephant Man, all of whom have enjoyed their time in the spotlight, Williams had this advice for up-and-coming acts. "Find someone who has a proven track record of success to work with you. Have someone qualified and educated to make informed decisions and guide you. Enrol in a course and get basic knowledge of the industry, so that you will be able to understand contracts and how things work."