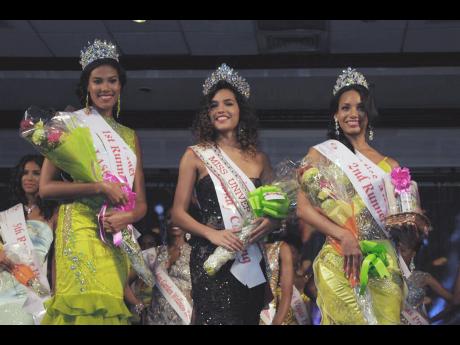 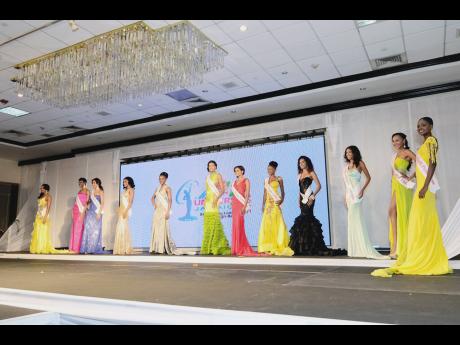 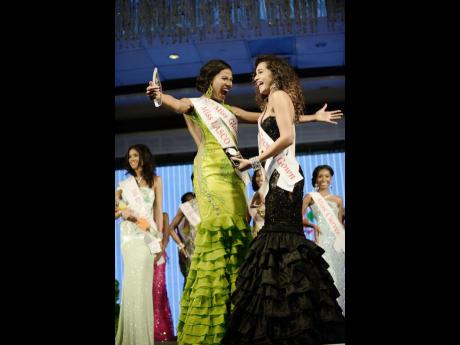 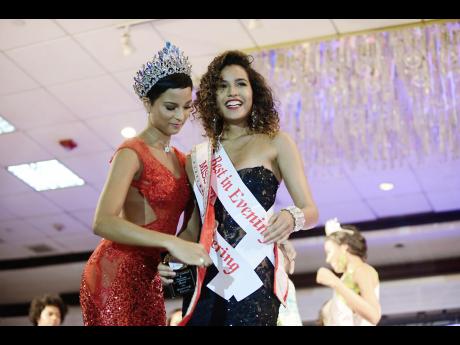 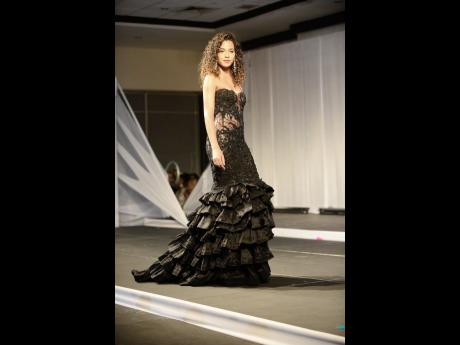 Sharlene Radlein struts across the stage in her evening wear. She also won the prize for Best in Evening Gown.
1
2
3
4
5

From a highly competitive and diverse field of contestants, 24-year-old Sharlene Radlein was awarded the title of Miss Universe Jamaica, along with other lucrative prizes. Her runners-up were 24-year-old Tasmin Golding and 27-year-old Shana Simpson, respectively.

The Gleaner caught up with a very excited Radlein on the red carpet after her coronation. She said: "I am excited for so many things. I am excited to travel to meet new people, to represent Jamaica and to make our country proud. I am just excited for all the things to come."

With regard to fulfilling the mantra of the Miss Universe Pageant, 'Enhancing Lives Through Beauty', the new queen, who was hit down by a car when she was younger, will be focusing on fatalities and car accidents. "I have noticed that the percentage rate has gone up by 20 per cent from last year, and I am really interested to get that number back down." Still in its infant stage, her plan is to start an organisation that targets young people in Jamaica and educate them on proper road use.

The renamed Miss Universe Jamaica Beauty, Fashion and Wellness Pageant, was staged on Saturday at the Jamaica Pegasus Hotel, New Kingston. It saw 25 females of varied backgrounds judged in three major categories: swimwear, evening gowns and personality interview, as well as the minor category - the X factor. In the latter, the judges looked for that extra-special quality from the competitors.

The 25 females made their opening appearance amidst screams and the uncharacteristic blowing of horns from supporters brandishing pictures and posters. They later returned, individually, wearing red-coloured two-piece-swimwear. Each strutted up and down the two-level stage, mindful that they were being judged on beauty and symmetry of form, skin tone and more.

Subsequently, the top-12 selected had to answer questions based on their personal interest. Except for a few mispronunciations of words in some cases, they all articulated their answers quite well.

But before the top 12 were identified, each contestant was also given the chance to wow the judges by modelling the Dermoth Williams Couture: The Journey. The gowns already stunningly beautiful, with designs that ranged from medium-length trains, straight bottoms to forest-thick ruffles, the contestants' job was to merely project their personalities and their natural beauty.

When the mandatory two appearances (individually and as a group) were completed, the judges declared that the five feet nine inches tall Radlein, with vital statistics: 32 / 24 / 34, was the best in executing the task, thus her receiving the sash, Best in Evening Gown. Danisha Scott, who also made the top 12, was awarded the title Miss Swimwear.

Tasmin Golding and Kellon Williams were the recipients of the two Gleaner-organised awards. Golding walked with the sash of Miss People's Choice award, and Williams the Miss Gleaner Social Media Award.

Overall, the pageant was a smack of elegance, except for a few technical glitches and the initial overly exuberant audience. The amiable Terri-Karelle Reid, along with co-host Steve Ferguson, marshalled the programme that also had performances by Francois Medley and featured act, Package (Patricia Edwards, Karen Smith and Gem Myers).

In addition, video images were projected on a large screen upstage. They depicted images of the training, photo shoot and other pre-show engagements that the contestants were involved in. There was also the customary farewell video of the outgoing queen. In this case, it was the history-making Kaci Fennell, who has travelled extensively. She will, however, continue her international travel, this time as the new Ting Ambassador.

Fennell, who was also shown on video visiting and interacting with students of Norwich Primary school in Portland, presented a trophy to Shanea Andrews, the first recipient of the Miss Universe Jamaica GOGETTER Programme.

The finals of the Miss Universe Pageant will be held some time later this year.