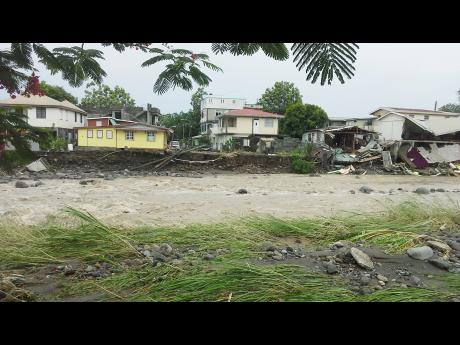 AP
A river overflows, affecting some homes along its banks, due to the recent Tropical Storm Erika in Roseau, Dominica. Streets across Dominica turned into fast-flowing rivers that swept up cars as the storm pummeled the eastern Caribbean island. 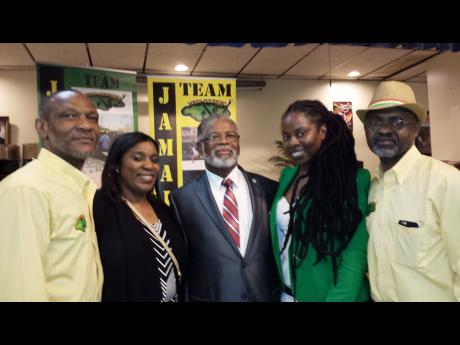 The Jamaican diaspora, in particular, the reggae community, is reaching out in love to support the Commonwealth of Dominica following the devastation and loss of lives caused by Hurricane Erika.

Jamaica-born Irwine Clare, who is helping to mobilise support in New York, told The Sunday Gleaner, that "Queens-based Irie Jam Radio, along with Team Jamaica Bickle, will be using the upcoming Irie Jam 22nd Anniversary Festival at Roy Wilkins Parks on Labour Day Sunday to facilitate the collection of items for the Dominica hurricane relief efforts, while working in concert with the Dominican consulate and the Jamaican Diaspora USA, NE. "This is an ongoing endeavour as we will use our radio platform, social media, our churches, and others to encourage persons to contribute," he said.

"Patrons attending the festival are encouraged to donate clothing, canned foods, toiletries, medical supplies, and batteries, which will be shipped to Dominica. The website for financial contributions and to be kept apprised of updates in Dominica is www.OPM.GOV.DM.," he added.

Jamaican media marketer Dave Rodney, who has visited Dominica in the past, indicated that Jamaica and Dominica have had a friendship that goes back many years, pre-dating the tenure of Prime Minister Eugenia Charles. "There were many bonds that were built with Dominicans studying at UWI, Mona, and, more recently, Dominica has relied heavily on reggae artistes to perform at their World Creole Music Festival, that attracts thousands of visitors each year," he noted.

Rodney said he spoke to friends Ivor and Nancy Nassief in Dominica a few days ago. Nancy (Martin) is Jamaican and was the first Miss Universe Jamaica.

"They are OK, but they've told me the island's infrastructure has been severely damaged by flooding brought on by 13 inches of rain in six hours. There is no electricity, no running water, and people can't keep in touch because they can't charge cell phones. Schools have been turned into refugee camps, many homes have been washed away, even a church and an entire resort are gone in the flood waters. There is an urgent need for food and medical supplies and the prime minister has pointed to a need for cash to rebuild and to keep the engines of the economy turning," Rodney said.

Dominicans in the diaspora, with the help of the Dominican mission in New York, are seeking to stage a benefit concert, with all proceeds going to support the island.

Felix F. Augustine, of BET Networks, who is helping to coordinate the event, said the date and venue has not yet been determined, but indicated the event will take place some time this month in New York City. He reached out to Rodney to assist with publicity and is calling on big names in the music business, including reggae and soca acts, to volunteer to perform, as the need for help is great.