A colourful opening for the Simon Bolivar Cultural Centre 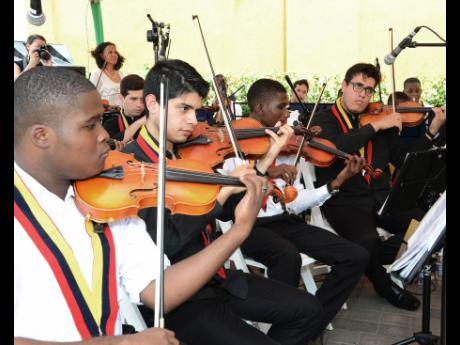 Ian Allen
Members of the National Youth Orchestra of Jamaica and Youth Symphony Orchestra of Venezuela playing together during the opening ceremony of the Simón Bolívar Cultural Centre at North Parade in downtown Kingston on Sunday. 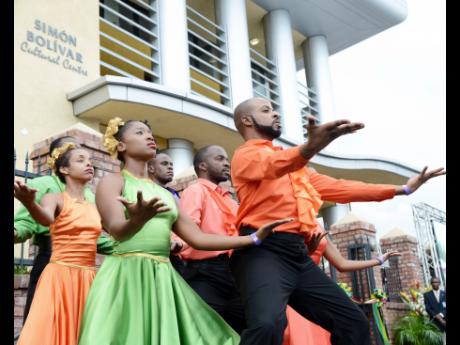 Ian Allen
Members of the Stella Maris Dance Company performing during the official opening ceremony of the Simón Bolívar Cultural Centre at North Parade in downtown Kingston on Sunday. 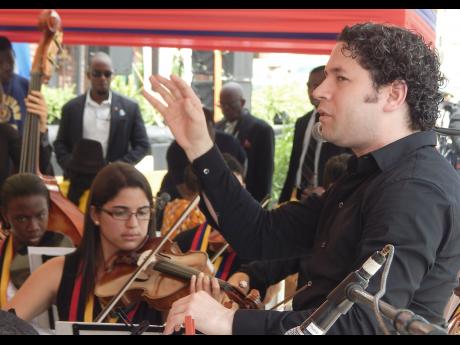 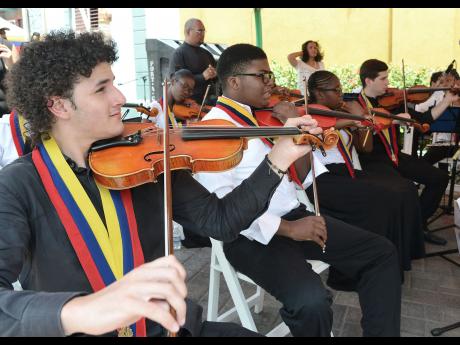 Ian Allen
Members of the National YOuth Orchestra of Jamaica and Youth Symphony Orchestra of Venezuela in performance. 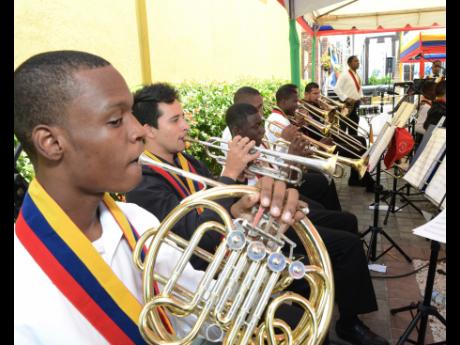 Ian Allen
Members of the National YOuth Orchestra of Jamaica and Youth Symphony Orchestra of Venezuela, during the official opening ceremony of the Simón Bolívar Cultural Centre in Kingston on Sunday. 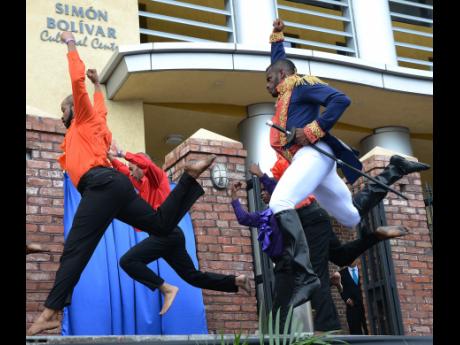 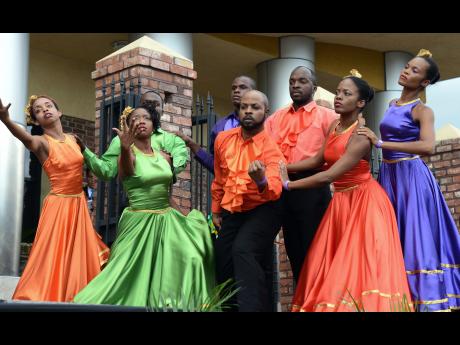 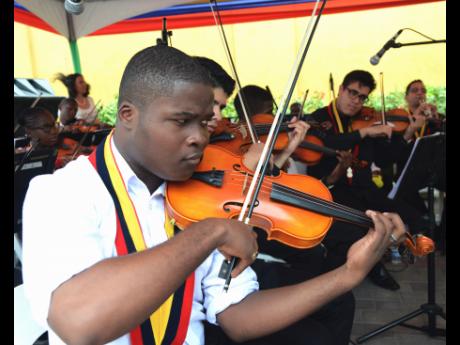 Ian Allen
Members of the National YOuth Orchestra of Jamaica and Youth Symphony Orchestra of Venezuela, strum up their musical chords. 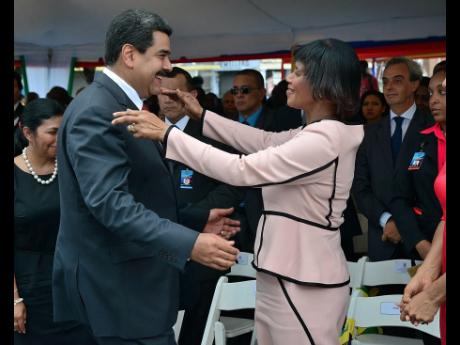 Ian Allen
Portia Simpson-Miller (right), prime minister of Jamaica, greets Nicolas Maduro Moros, president of the Bolivarian Republic of Venezuela upon his arrival for the official opening ceremony of the Simón Bolívar Cultural Centre at North Parade in downtown Kingston on Sunday.
1
2
3
4
5
6
7
8
9

At the official opening of the Simon Bolivar Cultural Centre (SBCC) at North Parade, downtown Kingston, on Sunday, the main entertainment was provided by the combined National Youth Orchestra of Jamaica, with 21 members, and the 16-strong Youth Symphony Orchestra of Venezuela.

Among the VIPs enjoying the music were Caribbean prime ministers and other government ministers, the vice-president of Cuba, and Venezuelan President Nicolas Maduro. The last named, one of the featured speakers at the function, called the combined orchestra "a miracle" which represented the unity of the Caribbean and Latin America.

He also called Jamaica, "a magic land of energy and spirituality", before ending his speech with the exhortation, "With Bolivar, let's say 'United Forever!'"

The theme of unity was picked up and elaborated on by Prime Minister Portia Simpson Miller, who spoke after Maduro. She referred to the famous Carta de Jamaica (Jamaica letter) which Bolivar penned 200 years ago, to the day, while residing in Kingston.

She said the letter, "set out a vision of the unity of the Caribbean and Latin America", and added that the SBCC was designed to promote a better understanding of Latin America.

(The letter by Simon Jose Antonio de la Santisima Trinidad BolÌvar y Palacios, also known as The Liberator of Latin America (from Spanish imperialism), was titled, 'Reply of a South American to a Gentleman of this island', and addressed to Mr Henry Cullen of Falmouth, Trelawny, who had expressed sympathy with the Latin American struggle for independence.)

Kingston's Mayor, Dr Angela Brown Burke, the first speaker, said the SBCC was a gift to Jamaica from the people and government of Venezuela and "a manifestation of the ideas of two great leaders, Hugh Chavez [the late Venezuelan president] and [former Jamaican prime minister] P. J. Patterson".

Emcee Fae Ellington told the audience - which included many ordinary Jamaicans both inside the tents erected in front of the Centre and on the streets around the cordoned-off area - that Jamaica's youth orchestra was inspired by the internationally lauded Venezuelan music programme, El Sistema. Set up 40 years ago, it aims to help poor, at-risk youth to rise socially through music.

Ellington said that through El Sistema, several Venezuelan musicians were sent here to train Jamaican music instructors over a 10-day period in programme delivery and pedagogical approach and technique.

"The Youth Orchestra has since been engaged in empowering Jamaican youth in classical music education at its five centres in Kingston and Spanish Town," Ellington added. Students are taught, free of charge, to read music and play orchestral instruments in after-school classes.

She said that the youth orchestra received support from the Petro Caribe Development Fund, and that more than 1,000 Jamaican youngsters have benefited from the programme since its inception.

The audience was told that Maestro Gustavo Dudamel, El Sistema's most famous alumnus and a conductor of both the youth orchestra in Venezuela and the Los Angeles Philharmonic Orchestra, flew from Milan, Italy, to attend the opening of the SBCC. (He was scheduled to fly on to Los Angeles yesterday.)

After the Jamaican orchestra's regular conductor, Darren Young, had conducted the combined orchestra for about an hour with popular and folk music (this was before the start of the official proceedings), Dudamel, 34, conducted the ensemble in the playing of the Jamaican and Venezuelan national anthems.

The other major bit of entertainment came from the Stella Maris Dance Company, which performed a 12-minute piece specially choreographed by artistic director Dr Monika Lawrence for the occasion. The energetic, colourful work by nine young men and women depicted Bolivar's life and struggles. It was danced to some of the words of the Jamaica Letter, as well as to Bob Marley's War and Get Up, Stand Up.

The SBCC was renovated by the Urban Development Corporation (UDC) and handed over in April to the Institute of Jamaica, which will oversee its management and operation. The building contains a library, interpretation room, language lab, multi-purpose room for lectures and performances, and administrative offices.

The chief UDC architect, Jamau Kambui, designed the building, on the front of which is a metal sculpture by Raymond Watson representing a battle-ready Simon Bolivar on his horse.