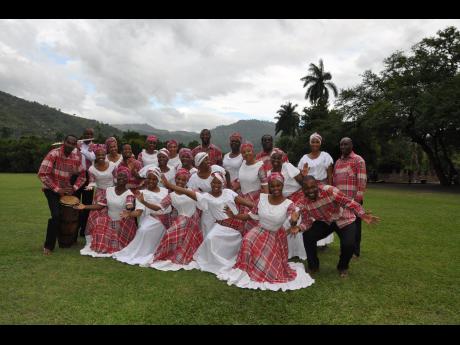 The Jamaican Folk Singers are set and ready to kick off their 2015 concert season at The Little Theatre, Tom Redcam Avenue, this Friday, September 11, through to Sunday, September 13.

Described as 'entertainment for the entire family', the 2015 concert season will be presented in five sections: Food, Relationships, Moonshine Dahlin', Lessons In Our Music, and As We Believe. Important to the Jamaican Folk Singers is education through entertainment, and the annual concert season presents another opportunity to help educate the public about aspects of Jamaican folk music culture and its relevance to present society.

The Jamaican Folk Singers, which was founded in 1967 by Dr Olive Lewin, has strived through the years to remain true to its mission, which includes unearthing and exposing the beauty and artistic worth of Jamaica's folk-music heritage. It has been 48 years of overcoming challenges and helping to keep alive the folk foundations of Jamaica's music culture, maintaining the focus on respect for our traditions and for the people who have kept them alive.

With a repertoire of more than 200 songs arranged by Dr Lewin, the group has sung to enthusiastic audiences in Jamaica and several other countries, including Martinique, Barbados, Cuba, Mexico, USA, Germany, Canada, Great Britain, South Africa, Trinidad and Tobago, and Argentina. In addition to overseas tours, the group has arranged island tours, giving free performances in markets, schools, church halls, and town centres. These tours over the years have been sponsored initially by Berger Paints in the 1980s, and more recently, since 2009, by Mother's.

The 2015 Concert Season presents another opportunity for the group to use Jamaica's folk music and its messages to uplift Jamaica while highlighting some of the values of 'old Jamaica', encouraging respect and understanding among people of different backgrounds.

The season will run from September 11 to 13 at The Little Theatre, with shows on Friday and Saturday at 8 p.m., and on Sunday at 6 p.m. Tickets are available at the Little Theatre, Tom Redcam Avenue; and Music Mart, South Avenue. Tickets cost $1,500. The concert on September 13 is a benefit performance for the Webster Memorial United Church.

The Jamaican Folk Singers operates with the belief that music greatly helped our forefathers cope with the realities of their harsh living conditions without becoming excessively bitter and believe that today, it can continue to bring and hold people together. So all are encouraged to come and join the Jamaican Folk Singers on the journey of showcasing and preserving aspects of Jamaica's folk music culture.