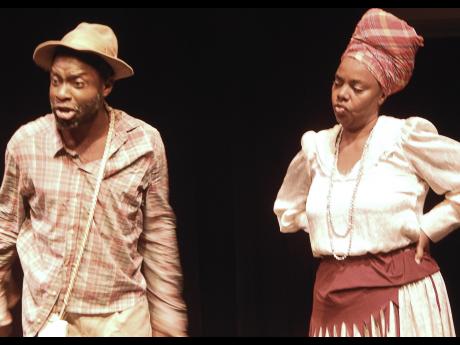 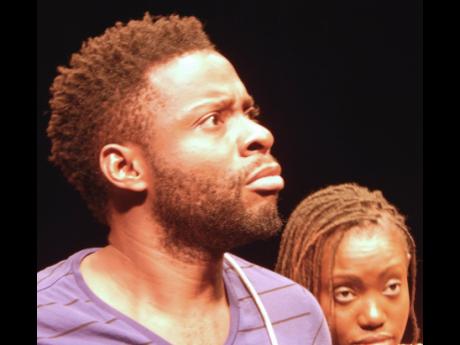 Michael Reckord
Andrew Clarke in a scene from 'Flambeaux'. 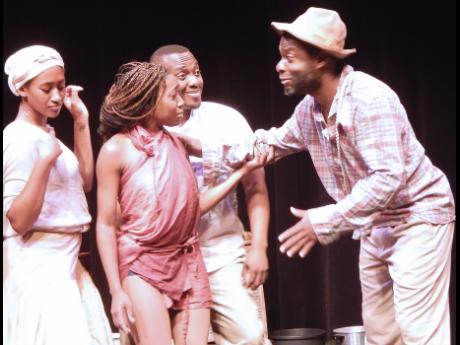 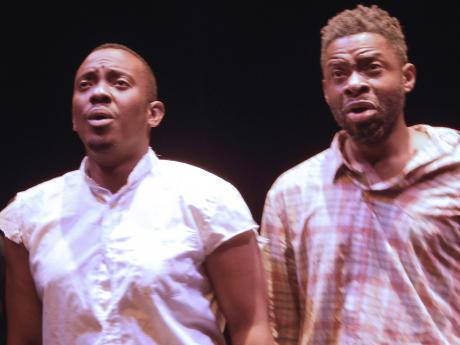 This is the second of a two-part article on Jamaican performers in New York. This week, the focus is on Andrew Clarke.

Like innumerable young actors, Andrew Clarke had dreams of becoming a Broadway star. "I wanted my name on the marquee," he told me.

So after graduating from the School of Drama, Edna Manley College of the Visual and Performing Arts, Clarke migrated to the USA. But instead of

heading to 'The Great White Way', as the main theatre district in New York City is called, he stopped off in Miami.

And for a while, he lost focus.

"I lived there for five years and I quickly fell into the American way of life. I got a nine-to-five and bought my little car. I was working as a car salesman, got promoted, and was earning quite a bit of money and driving a company car," Clarke said.

But the good living he was making left Clarke feeling "empty (and) missing something". He packed up his belongings in his car and drove to New York.

Clarke and I were sitting in a park in Brooklyn, New York, a few weeks ago, less than a half-hour drive from Broadway.

His theatrical journey began in earnest with his first commercial production in Montego Bay in 2005, the year Clarke graduated from Cornwall College.

Directed for the Montego Bay Little Theatre Movement (MBLTM) by the company's chairman, Douglas Prout, the cast included well-known thespians Makeda Solomon, Lloyd B. Smith and Karen Harriott. Clarke subsequently worked with other directors, so by the time he got to the Drama School, he had "a fair amount of professional performing experience".

Ironically, that experience made studying more challenging than it otherwise might have been.

"You're product-driven in the commercial world. You're in a show, you have six weeks of rehearsals and it has to go on by 'X' date. The Drama School was about focusing on the process and how you got there (not the final product)," Clarke explained.

Eugene Williams, the school's director of studies and Clarke's directing tutor, had to tear him "right down - in a good way, of course" Clarke added, "He really challenged me by giving me characters that were not me. He challenged my idea of an actor's work."

"But it was an illuminating experience. It helped me to grow as an actor and go beyond pulling from my bag of tricks, which is what you do in the commercial world, for you don't have the luxury of sitting down and experimenting in fine detail. I am thankful for that experience," Clarke said.

He is also thankful for the tutoring he got from School of Music lecturers Dr Curtis Watson and his wife, Pauline, whose singing classes Clarke would often audit.

"Whenever they had a free slot, they would allow me to take free classes with them," Clarke said. "I couldn't afford to pay. It was great. My voice really blossomed and I became a pretty good vocalist."

His Jamaican experience and education led to Clarke now being a multitalented director, actor and singer. New York helped him to become a producer as well.

A couple months after moving to New York in 2009, Clarke decided to start his own company. He was introduced to a Jamaican theatre practitioner who knew the ropes - actor, playwright, director, producer and college lecturer Karl O'Brian Williams.

Out of the meeting came the idea of Braata Productions, Clarke told me. Braata's website calls it "a non-profit theatre company based in New York City, and ... created to address the complete needs of theatre patrons in the United States by showcasing and promoting authentic Caribbean talent and culture".

The first work Braata Theatre Workshop mounted, was Trevor Rhone's Positive. "We do staged readings and full productions. In six years, we have done five productions, taking them to Connecticut, Boston and, most recently, to Trinidad with The Black That I Am (by Williams)," Clarke said.

Alluding to the rather serious tone of the workshop's productions, Clarke said they are "a little different from what the Caribbean and Jamaican people here have come to know and expect. When they think about theatre, they think Oliver (Samuels) and Shebada (Ramsay). We don't have Olivers and Shebadas, but we're still appreciated".

Clarke said that the Braata Folk Singers perform at various events, throughout the year, including for the Jamaican consulate, at church events, cultural events, and at the Brooklyn, Queens and Bronx borough halls. In December, the Braata Education and Outreach Unit mounts Ole Time Grand Market, a spin-off of Grand Market in Jamaica.

"It's cold, so we have to do it indoors," Clarke said, chuckling.

Bankra Caribbean Folk Festival incorporates folk traditions from all the islands. There is singing, dancing, dub poetry and other spoken word arts, Clarke told me. "We also do some work in schools, involving education in the performing arts. The emphasis is on Caribbean culture, of course," he added.

Our talk took place immediately after Clarke had finished rehearsing for his role in the following day's opening of the Caribbean musical Flambeaux, which Braata Productions was co-producing with the American company Obsidian Media Group. The conversation ended with Clarke telling me he was already planning for Braata's next gig.

It will be next month in Atlanta.