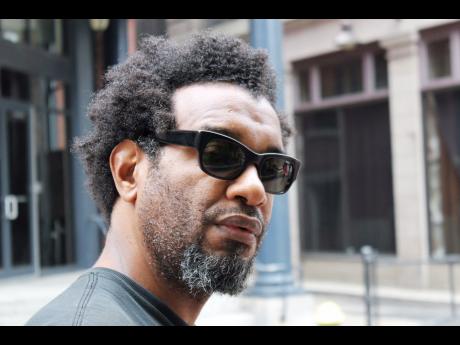 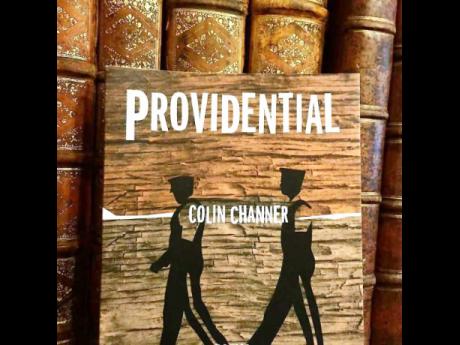 On first turning the pages of Providential, you meet the image of a policeman's rank designations - his 'stripes'. The constable,

corporal, and sergeant insignias are stark visual dividers for this collection of 27 poems in three parts, and this visual gambit represents a marker of how a man becomes.

The opening poem, Revolutionary to Rass, for Perry Henzell, begins with the admiration of a father figure or hero. Channer uses these 12 imagistic strophes to show the fractions of a Caribbean landscape with its system that makes policemen, according to the Henzell figure, "rangers" that keep the luxury of beauty and ease for the "landful" and out of the reach of the "landless". Colonialism, slavery, racism, and violence, all things the land somehow abets, are played discreetly, reducing the visible to effects:

That water has no colour, what you see is an effect

and, listen, ignore my logic if you want

for I don't business. True is True."

the sun a setting gel."

It is here that we get the first sight of the gun, ending the sentence in the penultimate strophe and bringing along its feeling and effect. The gun is everywhere in these poems, but does not call attention to itself. The gun represents a trade for simple hands, a boy's game, a scapegoat, a defence and a whip. The symbol's recurrence echoes its predictable sentence.

In First Recruit, Channer's image of generation, class and ritual are clear and precise, with short lines winding the tension of what is being enlisted.

Hair that gets comb teeth caught up.

Turning on a rush mat, a coir mattress,

lighting a lamp in a tatu cotched

on land with no title,

dabbing on a little obeah,

dressing in the fashion

of the humble decent

careful not to rip, stretch out,

palming down the seams."

The poet again is precise and economic with words: "for wogs to scoop/and chuck and barrow/blood and neighbours into pits". Even with the deceptive line endings, the iambic march of the lines is unignorable, aligning the heartbeat with the tragic. The wheelbarrow's practical familiar breach, the similar sound of barrow and marrow make the meaning and the tempo delightful and dreadful all at once.

In the poem 1856, the capitalisation of the word "History" and the final couplet, "Walking proudly. Traitors/falling into place," are all this poet needs to send us into the carnage of a rebellion and the division of a country.

Predictably, slavery's wear on innocence is a prominent theme in the early movements of the collection. In Lea, children are forced by circumstances to act as men and then return to their "simple pickney life". Channer explores formative, violent events while employing classic, evocative portraits. In the process, he does poignant things as in the line of verse "now to this moment, add rain" where he emphasises a truth, that we are authors of our memories and that memory is a reliving.

There are a number of pieces written in unrhymed couplets or two-line stanzas in the collection, a form that honours Kwame Dawes, who, in many of his longer poems, has found inventive use of the unrhymed couplet. But the form is used in curious ways each time. Clan is lenient with generous breaths, which gives a praiseful tone for a humbling scene, while in Neville's Logic, the tight language and the deft management of commas allows Channer to achieve a quality of breathlessness without compromising the core shape of the poem.

In that flight, Channer prepares us for the epiphany announced by the phrase "Until he sees". The revelation is a worthy one: notions of nationhood and "belonging" go far beyond the accidents of origin and the claims of fated birthright. Instead, they constitute a deliberate act of imagination, a wilful act of tying personhood to place.

The elegy Funeral is a strong piece in the collection, in which Channer accounts for the death ritual of a fallen comrade and what it means to grieve for a man in the company of men. His attention to the language is exceptional, managing melodious lines and cadences in a voice that sounds wholly contemporary: "the big-up of good argument and proof".

In fact, throughout the book, Channer effortlessly achieves the language you know by ear. In many lines, the English tongue many of us in Jamaica are schooled in is remade into something rooted in the improvisational impulse of patios, or dialect. It emerges here as a distinctly distilled and personal poetic invention in "batter-foot girls, cha-cha boys", "cunumunu", and "Vroops!" It is not styling, but the use of words and phrases we find joyous in their execution as we think to ourselves, "Oh! This is what I would say!" The voice is consistent in these poems, flexing with a gamut of personalities, as floater and yardie of various levels of Jamaican society.

Channer affirms reggae music as a source of poetic possibility and artistic foundation, and there are many instances in Providential that engage with these lyrics. What is striking, however, is the sophistication with which he employs musical tropes and the ways in which his venturesome engagement with form reflect his trust in music.

Fugue in 10 Movements, for instance, tempers the mental and physical experience of a place and time through its employment of the mood-based structure of the orchestrated fugue. This gives the contemplative voice multiple dimensions as we time travel though memory from gulls of the present to those of the past. Similarly, in General Echo is Dead we have a fugue-like effect with the three vignettes and the repeated phrase:

and no one knows.

As the sergeant image

surfaces in the third part of the collection, the reader has gone through the proverbial trenches, and the father's complex villain-hero identity is positioned as a questionable model of what a man must become, and the redemption of a nation is left up to the forgiveness of its sons. We prepare for the final meditations of the closing poems.

In Knowing We'll Be Mostly Wrong, directions and simple habits for children living in two times are pitted against each other to show how a father tries to do right and discovers that a child's need is simple: "time at the table." Somehow this ordinary ritual will exonerate a father.

"The rest of us have eaten, done homework,

travelled the planet once again through Viewmasters,

tonged puppy doodoo from the garden,

watered the common hibiscus and crotons,

washed our feet and gone to bed.

My son, who's ten years older than I was

when I last saw you, will soon leave for school,

a downhill walk from the heights of Providence,

downtown through its sad reaching for recovery,

It's the last day of the term.

I am up before him as always,

And not because I am good

But because he needs direction, watching,"

The book ends with the title poem Providential, a meditation in five parts that is as much the fall of man as it is the anticipation of his springing. Channer ruminates on places, comforts, and identities that he occupies with ease, but that do not grant immediate assurances of familiarity that he experiences in Jamaica. And yet, tellingly, even if paradoxically, this landscape does elicit the strong levels of contempt that we sense in his complex relationship with Jamaica, his place of origin. He is intent on recognising the connections between these worlds:

"Jamaica, where I come from,

is a mostly coral island,

eruptive in the way of newish nations

built on old foundations of violence,

geographies where genocide and massacre

mosquito nets. There but not there."

It is one of the poems in which Channer disarms us with a jolt of tenderness and complexity:

"A sentiment not unlike nostalgia

in its color, but reminiscent of sorrow

It doesn't always come with rain,

Here he examines the vulnerability of a man who has now become; it is a vulnerability, then, that he accepts in this brotherhood of the "settler" man - a brotherhood that becomes perhaps one of the more defining themes of the collection.

Channer's debut collection adds to the corpus of Caribbean literature as a luminous meditation on the making of manhood. Through its generational archetypes, we live the guilt, sin and redemption of the son and settler, all the time without judgement or moralising. Providential confronts us with its quiet revelations and, as a country, there can be no retreat from this.