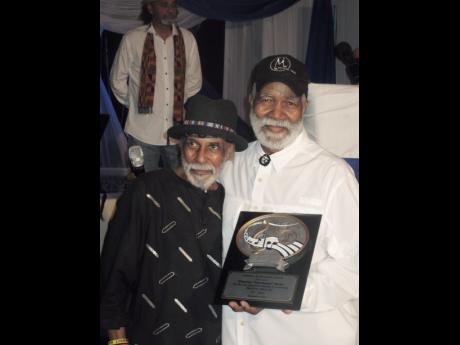 Mel Cooke
Winston Blake (left) and his brother Monte Blake, after Winston was presented with an award for his role in Jamaican popular music. 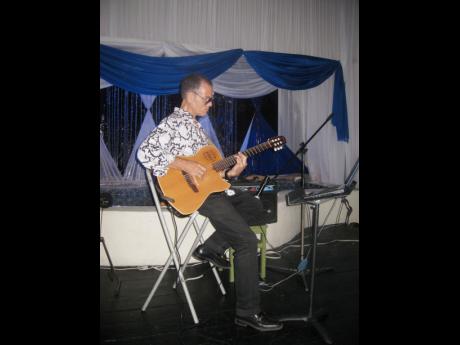 He said that the Thursday evening party has been going on for 43 years, the last 13 at Waterfalls and the first 28 at the former Turntable Club on Red Hills Road, with a Devon House stint accounting for the couple of additional years.

And the women, especially, who turned out for a very well-attended presentation of a schedule of events, which includes the Merritone Weekend at Sea Gardens Resort in Montego Bay, St James, seemed dressed as much to party afterwards as to listen to the speakers in the early going.

Monte Blake was the last of them, outlining a programme which began yesterday with a date at Rafters Rest in Portland. On Sunday, October 11, there will be a service of thanksgiving at the Webster Memorial United Church on Half-Way Tree Road, beginning at 9:45 a.m. On Wednesday, there is a Merritone Meet and Greet at The Deck, 14 Trafalgar Road, New Kingston; followed the next day by Merritone Turntable Thursday at its standard Waterfalls home.

The Merritone All-Inclusive Weekend is at the Sea Gardens Hotel, Montego Bay, St James, from Friday, October 16, to Monday, October 19, with Last Lick, dubbed 'A Salute to our Heroes', at The Deck on National Heroes Day.

There was a major role for someone who was not there, the late Lorna Jean, Monte Blake's partner who passed away. "I brought her. She is in the music room keeping my company," Blake said.

Michael Hall hosted a programme involving some of those who have

kept company with Merritone for a long time. Guest speaker Clyde McKenzie described Merritone as a brand that offers an experience.

"A brand is a promise of value. When it comes to a certain type of experience, Merritone has always been able to provide it," McKenzie said.

"We are celebrating 65 years of the establishment of a Jamaican institution," McKenzie said, reminding all that most businesses fade away within five years of start-up. He noted the sense of community around Merritone, naming some of those who are or have been fixtures at the sound systems parties. "You see a genuine affection for each other," McKenzie said.

Describing the Merritone experience as "timeless", McKenzie noted the role the Blake brothers - the second generation of the sound system's operators after their father Val - has played in providing that experience. "They have the gift of expressing how they feel about you," McKenzie said.

Lorna's presence was felt in another way as a cheque for $100,000, the money collected at her funeral service, was donated to the Edna Manley College of the Visual and Performing Arts, Colin Leslie symbolically accepting on the institution's behalf. There was also a presentation to Winston Blake for his sterling service at the turntables, Norma Brown emphasising the level of preparation that he puts into playing music.

"He spends more time listening to the songs to be played than the time playing them," Brown said. "The standards have to be maintained."

The commemorative plaque was presented to Winston by Earl 'Scouty' Whyte, Monte standing by his brother as requested. Winston described Monte as the best little brother anyone could have, one who constantly calls to check on his sibling's well-being.

Michael Thompson and Craig Ross are among those looking after Merritone's well-being into the future, Monte outlining a number of current initiatives that include streaming an

eclectic mix of music on www.merritonemusic.com.

He pointed out two new deejays on the roster for this Merritone 65th celebration, Richie Clarke and Clyde Buddoo. Merritone also plans to stage a performance by Marjorie Whylie.

Monte reported that the Merritone Family Fun Day held in August in New York went well. "It started in Canada and was moved to the US. It was in Connecticut for 16 years This was the first in Long Island, and it was massive," Monte said.

"We are truly grateful for the support to the Merritone family for the last 65 years," Monte said.

"As our Dad always said, things of quality have no fear of time. We say things of value must continue."

The launch programme was sandwiched between live music, Rupert Bent including Gimme The Night and No Woman No Cry in the opening and Damon Riley on saxophone included in the post-speeches offerings.