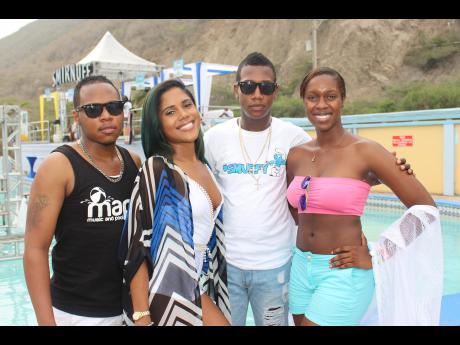 A name that isn't new to the entertainment scene is Coppershot Sound. They have been around for quite some time now - this year making it 21 years in the business - and they have been doing exceptionally well, both locally and internationally.

It seemed to have been the 'in thing' when Coppershot Sound decided to take on this particular career path.

"It started out in high school, as that was the thing to do in those times. Everybody was starting a sound, it was the cool thing and the girls loved guys who were into music," said a laughing Matthew Gray, one of the members of Coppershot.

"But after doing it just for fun, we realised that there was a lot of talent in the group so that kinda propelled us to the next step, and we took it from being a hobby to an actual business. And people always say, 'Try to find something you love doing so you won't work a day in your life', and this has been the perfect example of that for us," he continued.

Coppershot is always busy playing at some of the biggest and hottest events. This Sunday, they will be playing at MAPS (Music and Pool Series) at the Rockfort Mineral Bath. There is always something to look forward to when playing at any event, and, for any DJ, it is always the crowd's reaction that is most important.

"No better feeling than watching you take a crowd from walking into the party to them warming up and building up a vibe to all out partying and 'bruk' out. Just knowing that you're the reason that people come out and enjoy themselves and leave all other troubles or problems behind is a great feeling," Gray said.

"Well, MAPS has already established itself as a vibe party. Patrons know when you come to a Coppershot event, it is all about hearing a wide variety of musical hits from past and present - dancehall, hip hop, soca and more. So the patrons can expect that at MAPS, it will be the same high-energy vibe from Coppershot as always," Gray added.

The world's number one vodka, Smirnoff, is back on board and promises added excitement and amazing cocktail mixes, all included in the MAPS package.

"You won't want to miss this one! Smirnoff doesn't do anything ordinary," Nasha Douglas, brand manager for Smirnoff commented.