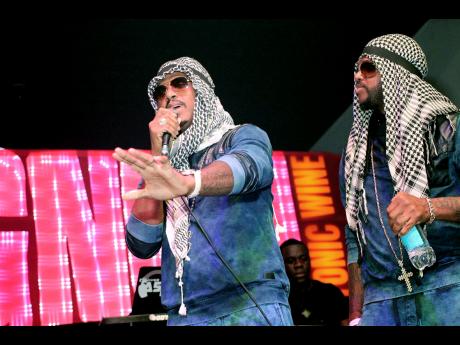 Following British Prime Minister David Cameron's announcement that Britain will spend £25 million to build a prison in Jamaica, some local entertainers have rejected the idea, claiming that the money should be invested in education and development infrastructure.

Patrick Gaynor of the duo Twin of Twins believes the decision should be properly assessed by the Government because of the possible implications.

"This cannot be accommodated when we have so many issues of our own with crime, indiscipline and, by extension, disorgan-isation," he said.

"Let's say a man is born in Jamaica but leaves immediately to the UK, commits a crime at age 40 and gets deported to Jamaica. Where does he go after he serves his time?" he added.

The deejay also believes the Jamaican economy is unfit to handle such a decision and suggests that rehabilitated persons should be allowed to return to England.

"There should be a guarantee that after rehabilitation, they be allowed to be reintegrated into British society or foot the expense of properly relocating them here in a foreign land they're not accustomed to live in. In order to accommodate their desire of building a prison on our soil, our Government should demand an additional set of millions upfront, and then more quarterly or annually to invest in ... the police force, factories, agriculture, cement company, airports. The resurgence of these vital infrastructure would stabilise the economy if managed effectively," Gaynor said.

According to recording artiste Savage, formerly of Mavado's Gully Side camp, Jamaica needs help, but not by building prisons.

"The people are seeking better; therefore, what you should be doing is build training centres and other institutions of learning. Most of the youth committing crimes in the UK are not educated and decided to go about things the wrong way, but trust me, educating them will be a better decision than to build a prison," said the artiste.

"We are already in debt to a lot of people and the taxpayers can't afford it. The £25 million will only benefit the contractor who build it and who get to scam around it, but nobody else in Jamaica will benefit; it's just a prison. There are many other things that could be done with that money," Gage said.

Tiana, on the other hand, tried to address both angles.

"We are a Third World country, so we can't possibly afford to feed these criminals when they get here. But the positive thing might be because they will be in their own country and that prison will perhaps have better conditions than the ones we have. But England is a First World country, so really, they are the ones who should be housing and feeding the criminals. There are two sides to every story," she said.

"I think the Government should mek dem know sey dem cyah manage that right now. Go somewhere else and build that. To me, that decision a guh create havoc, unless when dem (criminals) dun serve dem time, unno a guh tek dem back a England," Big Wayne said.

he also ruled out making reparations for Britain's role in slavery in the Caribbean and urged the region to "move on". For more than 200 years, Britain was at the heart of a lucrative trade of millions of enslaved Africans.