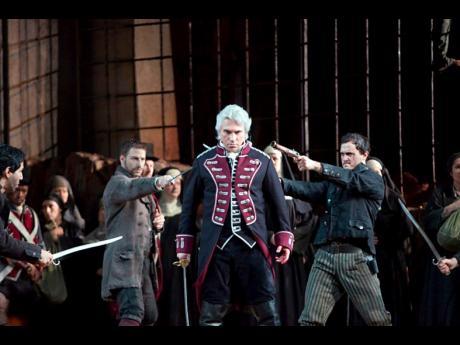 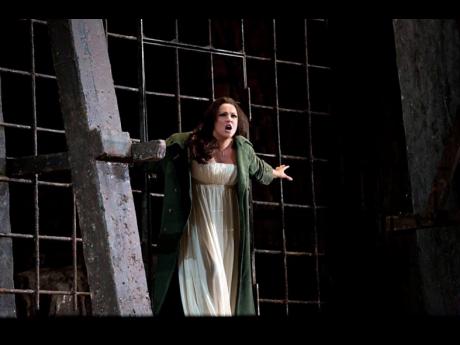 Contributed
The Russian diva Anna Netrebko, who is one of the Met's top box-office draws.
1
2

Jamaican audiences will have another chance to enjoy Sir David McVicar's production of Verdi's I1 Trovatore, this Sunday, at 11:30 a.m. There will be an encore showing at Palace Cineplex at Sovereign Centre Liguanea, St Andrew, and Palace Multiplex Fairview Shopping Centre, Montego Bay, St James.

Anna Netrebko is featured in her highly-anticipated Met-role debut as Leonora, the tortured heroine of Il Trovatore.

Dmitri Hvorostovsky sings Count di Luna in the first pairing of the two Russian superstars at the Met since 2002.

Yonghoon Lee is Manrico, the title character, Stefan Kocan is Ferrando and Dolora Zajick sings her signature role of the demented gypsy Azucena.

Russian diva Anna Netrebko, one of the Met's top box-office draws, is headlining her 12th HD show, more than any other lead performer. Her character, Leonora, is a touchstone role of the soprano repertory, and one of the most daunting.

"It's long, it's huge, it has everything, e-ve-ry-thing," Netrebko said in an interview at the Met recently.

"High notes, low notes, chest voice, coloratura, staccato, legato, the whole package. You have to be a camel in the desert, working nonstop without water."

Whatever the difficulties, critics are raving about Netrebko and her co-stars - tenor Yonghoon Lee, baritone Dmitri Hvorostovsky and mezzo Dolora Zajick. Now, with two performances already under her belt, does Netrebko plan any special preparations for the HD, which will be seen up close by hundreds of thousands of people in addition to the 3,800 who fill the opera house.

"Don't eat on the night before, don't drink on the night before, so your face will be smaller, the eyes not puffy," she advised with a mischievous grin Netrebko is far from the only soprano to make a mark as Leonora. The role has been a vehicle for some of the biggest stars of the past. Leontyne Price made her debut in the part in 1961, and Leonora also was the last role Joan Sutherland sang at the Met in 1987. The singer who holds the record for the most Leonoras with the company is Zinka Milanov, who sang the role 49 times, from 1937 to 1957.

Il Trovatore is notorious for its tangled plot, which involves four main characters, all caught up in deadly obsessions of one kind or another. The music is of such unrelenting intensity that, in a good performance, audiences get swept up in the drama and hardly notice the improbabilities of the story. However, as George Bernard Shaw wrote "if it allowed you to think for a moment, it would crumble into absurdity."

One of the most thrilling vocal climaxes in all of opera is the ringing high C that caps the tenor aria 'Di quella pira'. Thrilling, indeed, but Verdi didn't write it that way. His score calls for no high note at all, but he gave his blessing to tenors who decided to interpolate it for dramatic effect.

Nowadays many tenors leery of lunging for that difficult note transpose the melody down a bit. In the current performances, the Met said Lee takes it down one tone to a B natural.

Hvorostovsky's fans were shocked when he revealed earlier this year that he is undergoing treatment for a brain tumour and was cancelling all his plans through the summer.

But the Russian baritone is singing three performances of Il Trovatore at the Met before resuming treatments.

On opening night, the audience cheered Hvorostovsky's first appearance so loudly that he broke into a broad grin and thumped his heart in appreciation. During the final curtain calls Hvorostovsky's cast mates pushed him forward to the apron so orchestra members could pelt him with white roses.

Tickets are now on sale for the Met Opera's 2015-16 season at the box offices of the Palace Cineplex and Palace Multiplex, and via the web at www.palaceamusement.com, with a Palace Card.