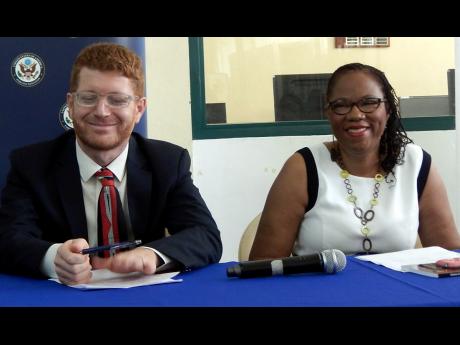 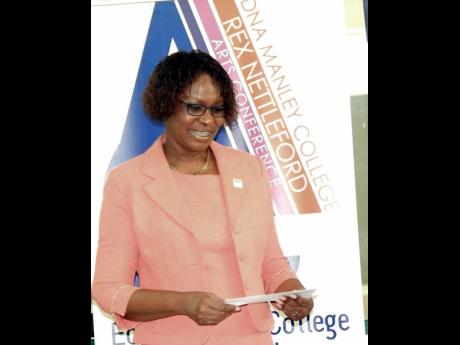 Michael Reckord
Principal of the Edna Manley College of teh Visual and Performing Arts, Dr Nicholeen DeGrasse-Johnson, is delighted with the CHASE Fund cheque which was handed over at the college on Monday. 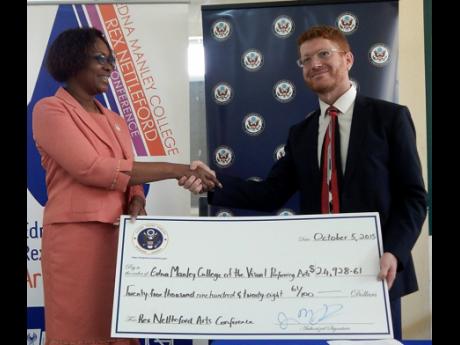 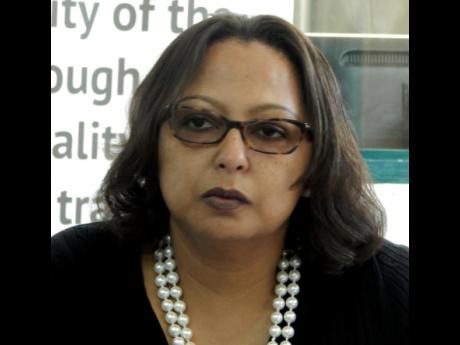 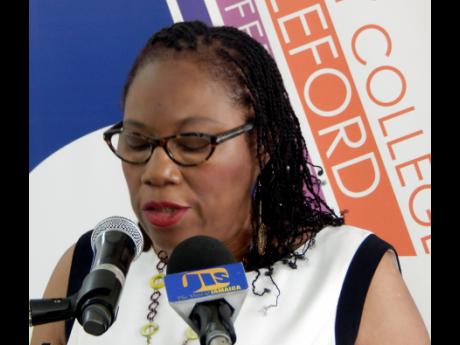 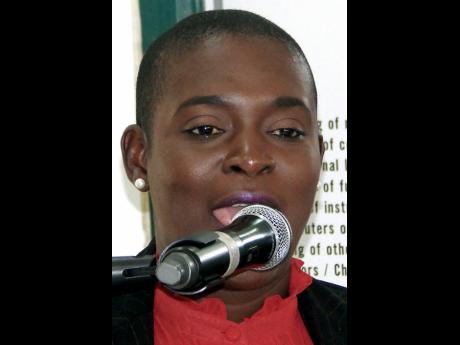 Not only have more groups registered for the third Rex Nettleford Arts Conference at the Edna Manley College of the Visual and Performing Arts (EMCVPA) biennial conference than in previous years (2011 and 2013), but there has also been an unprecedented level of sponsorship.

The conference begins next Wednesday, October 14.

Cheques presented on behalf of the US Embassy and the Culture, Health, Arts, Sports and Education (CHASE) Fund, at a press briefing held at the college on Monday, cover most of the approximately $6 million budgeted for the conference.

Principal Dr Nicholeen DeGrasse-Johnson received a cheque for nearly US$25,000 from the US Embassy's Joshua W. Polacheck, and the CHASE Fund cheque for $2 million from the organisation's public relations and administrative manager, Hilary Coulton.

Before the cheque handover, conference co-chair and EMCVPA vice-president of academic affairs, Carol Hamilton, gave an overview of the conference. It is being hosted jointly by the EMCVPA and National Gallery of Jamaica and has as its theme 'Growing the Arts: Breaking Boundaries'.

The conference, Hamilton said, "provides the opportunity for local, regional and global voices of arts educators, policymakers, researchers and practitioners to raise awareness and lead the discourse as cultural agents for change and expression."

Their goal is "to break boundaries of stereotypes and seek to grow the arts [and] create enlightened appreciation and knowledge of the arts and its intrinsic value to society".

The organisers believe that sustainable and strong investment in our culture capital would facilitate regional economic stability.

"However, a paradigm shift in thinking is needed to increase access to education and training opportunities in the arts, supported by sound national arts and culture policies," Hamilton admitted.

Expressing gratitude for the financial support of the United States Embassy in Kingston and the CHASE Fund, as well as the "in-kind" support of several other sponsors, Hamilton said it is the first time the college has received that level of monetary support for hosting the Rex Nettleford Arts Conference.

She considers the assistance "a testament to a growing support for the arts in Jamaica [and] growing commitment and the belief in the importance of arts and culture to the development of the nation."

Polacheck said the US Embassy does not see the grant as patronage, but an investment in the arts. He said the United States gets more than US$40 billion, annually, from its entertainment-related exports, making entertainment one of its top 10 exports. Almost five million Americans are employed in the industry, Polacheck continued, adding that he sees no reason why Jamaica shouldn't have similar, or even better, figures.

Jamaica is "a global brand" and it is worthy of becoming "a global cultural destination", he said.

Echoing Polacheck, Coulton said she also regards the CHASE Fund cheque as an investment in the arts. She added that the institution has been making that sort of investment for the 12 years of its existence, to the tune of almost $2 billion.

In a chat after the function, the other co-chair, Keino Senior, an EMCVPA lecturer, spoke happily about the growth in international awareness about the conference. That is the reason for this year's increased participation from the Caribbean and the wider world, he said.

This year's presenters come from the US, Barbados, The Bahamas, Canada, China, France, Trinidad and Tobago, St Lucia, Grenada, Montserrat and Jamaica. About 90 persons from overseas have registered.

Conference activities begin on Wednesday, October 14, with performances by several dance companies. Included are North Carolina's A&T University, the University of Georgia, Trinidad and Tobago's Dance & Performance Institute, the EMCVPA School of Dance and, in honour of the late Prof Rex Nettleford, the National Dance Theatre Company, which he co-founded.

On Thursday and Friday, from 9 a.m. to 5 p.m., there will be panel discussions on a range of arts-related topics, such as dance, dance therapy, music, music therapy and theatre arts, the visual arts and arts management. There will be numerous presentations of papers, lecture demonstrations, master classes, exhibitions, talks by artists and workshops.

A special panel discussion on Nettleford's cultural legacy is scheduled for Friday morning. As part of the conference offerings, delegates will be transported to the National Gallery to view the current Young Talent 2015 exhibition and talk with the artists.

The conference's many and varied subjects include 'Arts Education'; 'The Arts and Disability'; 'Arts Festivals and Biennales'; 'Arts as Activism'; 'Arts and Identities: Local, Regional, National and Global'; 'The Arts: Therapy and Rehabilitation'; 'Defining Audiences: the Role of the Reader, Viewer and Listener'; 'The Arts in Popular Culture and the Media'; 'Arts Policy, the State and Law'; 'Children and the Arts'; 'The Business of Art'; 'Art, Well Being and Healing; Public Arts, Collective Memory, Cultural Heritage'; 'Artistic Expression, Identity and Cultural Rights'; 'Art and Globalisation'; and 'Art of Nature: Culture of Sustainability'.

Host of Monday's press briefing, Coleen Douglas, provided me with conference abstracts. Some of the titles are 'Dance Movement Therapy: Healing People With Mental Illness'; 'The Culture, Education and Socio-Economic Debate': 'An Artist's Model for Economic Development'; and 'Music is a Hobby, Get a Real Job: The Role of the School of Arts'; and 'Egungun in Disguise: The Jamaican Nine-Night Ceremony' (all from US presenters).

From Jamaica comes 'Reviving the Art of Speaking English in Jamaica's Primary Schools'.

'Re-crossing the Atlantic: Connecting African Dance Students With African Dance Culture Through Learning and Performance of the Caribbean Bele' (South Africa); 'The Impact of Theatre Arts on the Development of Self-Esteem' (Barbados); and 'A Voice Through Art: An Art-Based Intervention Strategy to Highlight the Issues of Women Affected by Domestic Violence' (Trinidad & Tobago), will also be presented.

On October 15, Jonkonnu Arts Journal, which includes papers presented at the 2013 conference, will become available. The conference ends on October 17, with a fundraising concert, Water the Roots, featuring graduates of EMCVPA.