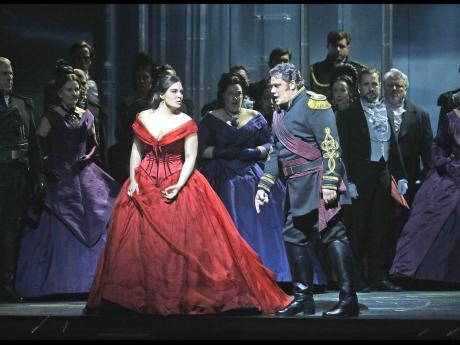 Contributed
Aleksandrs Antonenko (right) stars in the title role of Otello and Sonya Yoncheva as Desdemona.

Sonya Yoncheva's "luscious sound has just enough of an earthy tinge and texture to balance the shimmer of her singing ... . What other soprano right now can sing the Willow Song and Ave Maria more beautifully?"

Zeljko Lucic "is superb as Iago, a chilling and malevolent portrait of evil personified... A stark and simple yet often powerful new production of Verdi's passionate and masterful rendering of one of Shakespeare's greatest plays."

The opera is set on the island of Cyprus in the late 15th century. The island itself represents an outpost of a European power (Venice) under constant attack from an encroaching, hostile adversary (the Turkish Empire). In a sense the setting echoes Otello's outsider status: he is a foreigner (a 'Moor', an uncertain term applied indiscriminately at that time to North African Arabs, black Africans and others) surrounded by suspicious Europeans.

The Met's new production updates the setting to the late 19th century, where the action unfolds in a shape-shifting glass palace.

The score of Otello is remarkable for its overall intensity and dramatic insight, rather than the memorable solo numbers that made Verdi's earlier works so popular. The latter are present most notably in Desdemona's Willow Song and haunting Ave Maria in the last act and the baritone's Credo at the start of Act II.

Throughout the score the orchestra plays a diverse role unprecedented in Italian opera. This begins with the impressive opening storm scene in which the power of nature is depicted with full force, including an organ playing at the maximum possible volume.

Giuseppe Verdi wrote the title role of Otello (one of the most demanding in the repertoire) for Italian tenor Francesco Tamagno, who starred in the 1887 world premiere and went on to perform the opera 13 times at the Met in the 1894 - 95 season. Outstanding Met Otellos of the past 120 years have included Leo Slezak, Giovanni Martinelli, Ramon Vinay, Mario Del Monaco, James McCracken, Jon Vickers, and Placido Domingo.

Tickets are now on sale for The Met Opera's 2015-16 season now at the box offices at Palace Cineplex and via the web at www.palaceamusement.com, with a Palace Card.