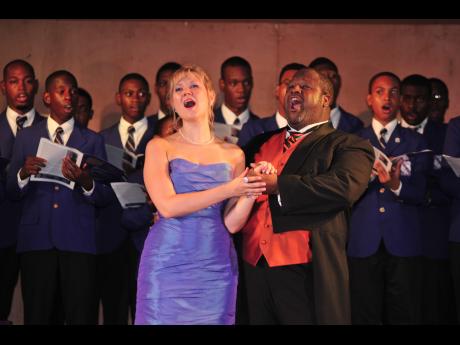 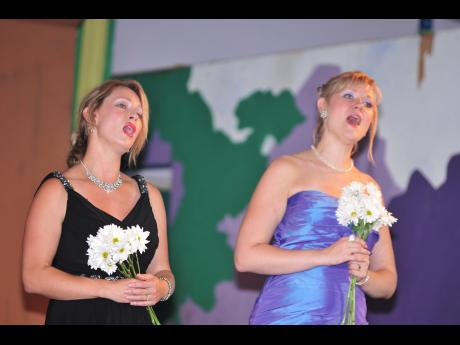 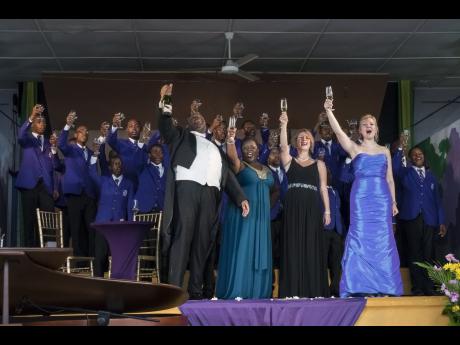 Contributed
The encore piece, 'The Champagne Song', brought much excitement.
1
2
3

An enchanting evening amid showers of blessing! Last Saturday, Kingston welcomed its long-awaited showers which gave the St Andrew Parish Foundation (SAPF) more than a gentle nudge to switch the venue of their October 3 gala musical evening - Festum Sancti Andreae - from the lawns of King's House to the St Andrew Parish Church Hall in Half-Way Tree.

The evening of entertainment which was under the distinguished patronage of the newly appointed Canadian high commissioner, Sylvain Fabi, thrilled the audience.

Heading the rain-affected but highly appreciative audience was Sir Patrick Allen, governor general, along with standing co-patrons of the SAPF Mrs Valerie Facey and Vincent Lawrence, and his wife, Mrs Lawrence.

The National Anthem announced a prompt start to the gala event. The Kingston College Chapel Choir, sartorially elegant in regal purple, then graced the stage led by choir master and conductor, Audley Davidson, who accompanied on the piano. Opening with The Prayer, arranged by Tom Fettke, followed by O Come Ye Servants of the Lord, and finally, Hal Hopson's Praise My Soul the King of Heaven, the audience was immersed in exquisitely harmonious surround sound.

The lead players and performers for the evening, Canada-based Jamaican tenor, Paul Anthony Williamson, and Canadian soprano, Allison Cecilia Arends, headliners at the first staging of Festum Sancti Andreae in 2014, were joined on stage this year by esteemed Jamaican soprano Lori Burnett, and Canadian mezzo-soprano Kathleen Promane. As he did for the inaugural staging last December, Roger N. Williams, director of the School of Music at the Edna Manley College for the Visual and Performing Arts, brought his remarkable virtuosity to the piano.

The selections included well known pieces from Carmen, La Boheme, La Traviata, and a stunning rendition by Allison Arends and Kathleen Promane of the Flower Duet from Leo Delibes' Lakme, an early crowd favourite. Very popular pieces such as Frederick Loewe's I Could've Danced All Night, from My Fair Lady, superbly performed by Lori Burnett, and the moving duet - One Hand, One Heart - from Bernstein's West Side Story, formed part of the extensive programme of works through which master of ceremonies Tony Patel guided patrons.

Festum Sancti Andreae was a winner for the audience and the performers alike. The young KC Chapel Choir members were evidently enthusiastic about their participation in this event, savouring every moment onstage as they performed their opening pieces and even more so when they accompanied the main performers by singing the choruses of selected pieces throughout the classical musical extravaganza. Their support to Arends and Williamson, in their rendition of Brindis from Verdi's La Traviata, which marked the conclusion of the first half of the programme, was without question, impeccable.

Students from the Edna Manley School of Music, present in the audience, also added youthful excitement to the evening as they cheered on their beloved lecturer, Burnett, and school director, Williams. Immersed in a unique learning experience, the concert, which provided tremendous insight as they observed Burnett in performance with her peers Arends, Promane and Williamson, was the fitting conclusion to the two-hour master class conducted by the visiting performers at the school earlier in the week, in which they were privileged to participate.

Festum Sancti Andreae has definitely made its mark on the local entertainment landscape, having been dubbed a musical feast showcasing talented operatic performers who rendered selections from light and grand operas, favourite stage shows and folk songs. As the evening came to a close, the audience swooned as the quartet took to the stage to perform Peter Ashbourne's arrangement of the Jamaican folk song, Lion Heart, a truly heart-warming performance. However, it was the encore piece, The Champagne Song, from Die Fladermaus, that enticed the performers and audience beyond expectations as Paul Williamson dramatically popped open a bottle of champagne which bubbled over into flutes as the quartet-backed by the entire KC Chapel Choir (they with wine glasses of water), toasted the audience as they sang and sipped, rhythmically raising their glasses to this rousing piece. In inimitable Jamaican style, skillfully and tastefully executed, this rendition included a verse of Williamson's own creation to toast the St Andrew Parish Church, congratulating its congregation as it brings down the curtain on its year-long 350th anniversary celebrations.