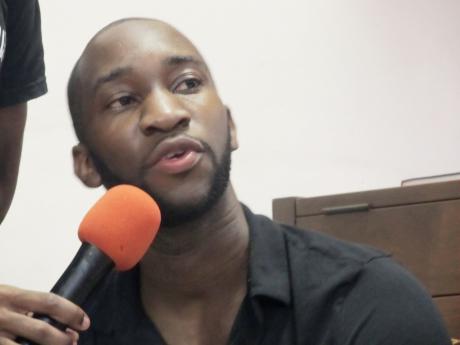 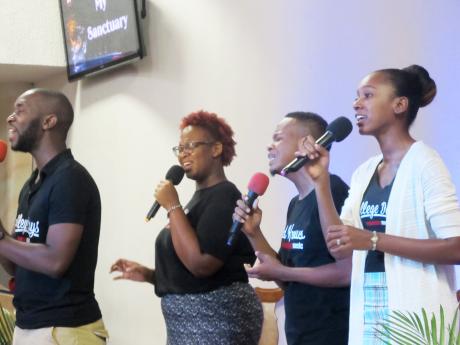 What began as a pastime for Adiel Thomas and a group of his family and close friends culminated in a debut album, College Days, launch on Saturday.

They decided to launch the album in an unorthodox way. "We are closely affiliated with this church, so we knew that people would come out and support us if we said we are doing it [the launch] this time, and that is the reason why," group leader and co-founder Thomas told The Gleaner.

The intriguing launch was preceded by a discussion session as the regular attendees and visitors arrived. And, in a way, this discourse was continued by gospel vocalists Wayneche Watson, Karim Chang, Janielle Corburn (nee Smith) and Thomas. In songs and dialogue, they interspersed emotional testimony with the moving lyrics of songs selected from the CD.

Adiel Thomas & Ministry was quite engaging in their ministry through songs.

After singing a part of the song Little Mercies, Janielle, who is a registered nurse, explained to the congregation that she attended Northern Caribbean University (NCU) at a low point in her life and "Ministry has blessed my heart". She concluded her testimony by telling the congregation to be encouraging of others and always show appreciation.

Prior to the singers abandoning their initial position in front of the congregation for the elevated podium, Thomas, who led He'll Work It Out, was effective in having the large turnout coming together to sing, after being assigned sections of a song.

With all the group members on the podium, seated to deliver what Thomas described as "the real mellow part", they did Find My Way (track 11 on the CD). The song goes back to what took place in their college days. It, too, is a good song with powerful lyrics. But it was the calming sounds and beautifully written Jesus in My Heart that had the congregation saying amen in unison upon its conclusion.

The final song they performed is very personal to him, Thomas shared. He loves success, but the song has left him with several questions, the answers to which left him disappointed. But, for the audience, the singing ministers used it as the altar call of their musical sermon, asking "if God comes now, would you be ready?"

When Watson, who is a Bermudian, delivered her testimony it evoked some empathy and laughter. She currently attends NCU and said that her transition to Jamaica was difficult. One reason was Watson did not want to leave her home for hot Jamaica. But while she did not want to make the change, God had other plans in store for her. And so, the very reserved Watson found herself in Jamaica, and in Kingston, telling her story to a large congregation.

The short launch soon came to an end. However, after giving the congregation the option of selecting the closing song, Adiel Thomas & Ministry was unable to do the one that was chosen. This, Thomas said, was due to a limited "repertoire of prepared songs." He explained that with the group's members living far apart, they had been to rehearsal only twice. However, the lack of rehearsals was not evident in their fulfilling musical ministry.

Adiel Thomas & Ministry consists of graduates and students of NCU. To date, they have been to Bermuda and New York, among other places. The group was formed in 2009 when the members were NCU students. "I wanted to live a Christian life, where I want to be serious about God," Thomas recounted.

It took him all four years of his college life for Thomas to compile the songs on the album. Every song on the 13-track CD is an original.