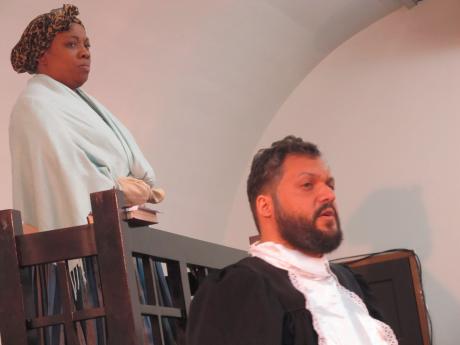 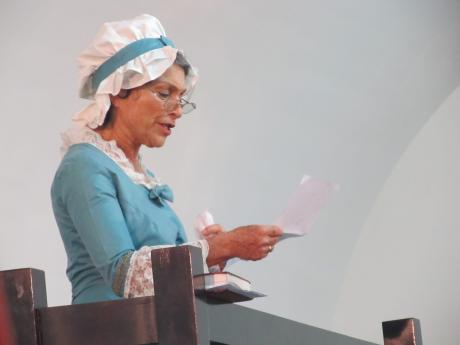 Marcia Rowe
Lucy Gordon (Hiliary Nicholson) reads a letter from her husband that was addressed to her. 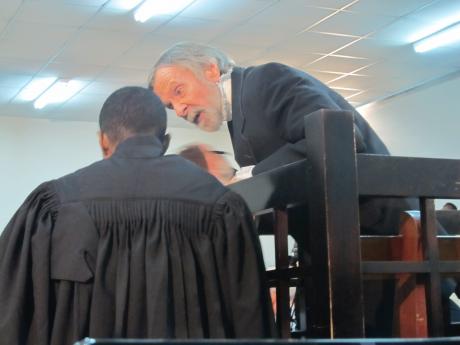 It was a trial that should have taken place 150 years ago. But it is said that the wheels of justice are slow and the arms of the law are long. And for Governor John Eyre, who many Jamaicans blamed for the hanging of a number of citizens from the eastern parish of St Thomas in 1865, both justice and the law caught up with him centuries later, albeit in a naturalistic dramatic production titled The Trial of Governor Eyre.

And those who attended the trial were just as emotionally stirred as, perhaps, it would have been for those who were around centuries ago. This, and more, was evident at the Sunday morning revolutionary court staging in the new courthouse in Morant Bay, St Thomas.

The play, directed by Michael Holgate and penned by Bert Samuels, is "sliced from a time continuum", or focused on a single event from an important stage in the history of Jamaicans. As the title implies, it concentrates only on the trial of Eyre (played by Bob Kerr) for his role in the hanging of four Jamaicans - Paul Bogle, George William Gordon, Leticia Geohagen, and Mary Ward - after the Morant Bay Rebellion.

Filled with a brand of courtroom drama, approximately two hours in length, the production traverses the arrival of prosecutor Gorrie (Peter Abrikian), defence lawyer (Able-Don Foote), the defendant Eyre, the announcement of Judge Batts (Fabian Thomas), the introduction of jury and witnesses, the deliberation of the jury, the opening and closing statements of both lawyers, ending with the handing down of the final verdict.

More important, the stories of the witnesses and relatives of the deceased, brought in by the prosecutor, documented the lives of the characters with amazing success.

There was enough to laugh at, but the cast, playwright and director remained true to the sincerity and purpose of the play. However, the director went avant-garde with his choice of venue. He not only chose to stage the play in a courthouse, he kept the layout of the furniture (set) as well as capitalised on using most of the doors for the characters' entrances and exits. With such staging, there is no defined space called the house, and the audience became more than spectator to the proceeding. His decisions - to be bold and creative - worked effectively.

The cast seemed to have understood their roles and followed the courtroom procedure accordingly. Kerr presented a very convincing Eyre in his attitude and behaviour towards the trial and continued this approach verbally when Eyre made his remarks from the dock. Thomas as the judge commanded with authority. The lawyers, Abrikian and Foote, found the correct voice, tone and style for their questioning.

In their roles as relatives of the deceased, Hilary Nicholson, Shauna-Kay Burns, Renae Williams, Susan Beadle and Stephen-Rae Johnson evoked humour and pain. All found the right emotional pull at the correct time. In general, they were credible in their individual characterisation and, on a whole, The Trial of Governor Eyre was a success.