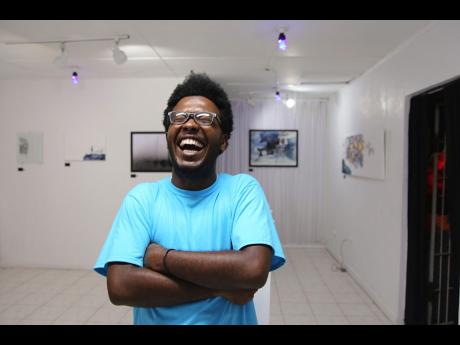 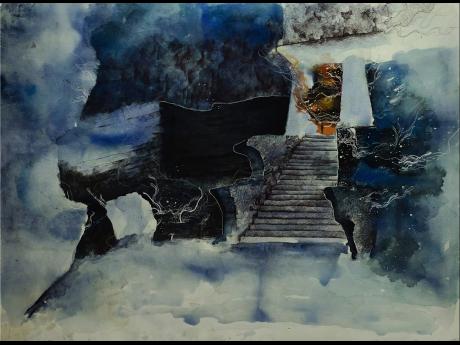 Contributed
'Stagnant' by Richard Nattoo as part of his first solo exhibition, 'Reverberation of the Silent Echo' 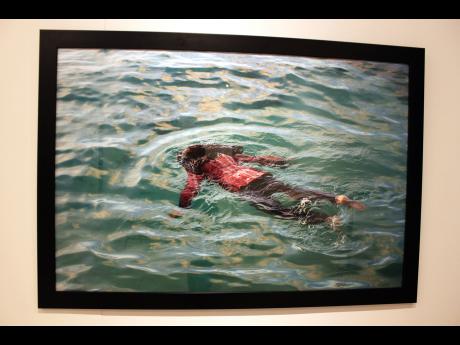 Getting that big break in the local art industry has always been hard for aspiring artists, and even in an era where technology has made it easier for people to communicate and showcase their talent via social media. Artists are still finding it difficult to get their foot in through the doors of Jamaica's art industry.

That is the general feeling among some of the participants in this year's Young Talent exhibition, organised by the National Gallery of Jamaica (NGJ). Young Talent 2015, which started on October 30, features 10 artists under 40 years old. In an effort to stimulate the development of Jamaican art, the exhibition seeks to provide national exposure to new and emerging artists. Understanding the NGJ's main objective, participants who spoke to The Sunday Gleaner, lauded the exhibition's organisers, highlighting how grateful they were for the well-needed support. While heaping praises on the NGJ for always finding ways to support young talent, the up-and-coming artists says Jamaica needs to do more in exposing young talent.

Richard Nattoo, one of the artists featured in the Young Talent exhibition, says he has been doing art professionally for three years and knows first-hand how difficult it is to get that all important break. "It is very challenging. As a young artist getting a break... depends on who you know," he said. "It's just like the music business where you have to know people to get your songs played on the radio. It's just as hard to get an exhibit as a young artist, you have to know people that will give you a space." Nattoo went on to say that the Government needs to help in levelling the playing field where all cultural forms are concerned, as he says art needs just as much attention as music. "People see music everywhere so there is a greater appreciation for it, but is not the same for art. If people are going to take art seriously, they need to start hearing or seeing more of it and the government can help with that." He gave erecting a few more cultural sites or restoring the dilapidated ones as ways to improve the art industry's reach. "We need more spaces to exhibit so people can become more exposed," he explained. "If people are seeing the art more, then they will eventually learn to appreciate it and see it as something worthwhile. They also need to invest in programmes like the Young Talent exhibition more, to help it reach a wider audience."

Domanie Hong, another of the exhibition's featured artist, agreed with her colleague to some extent. While agreeing that the government needs to do more to help foster development in the art industry, Hong believes it is the people who will spark the art revolution. "I wouldn't necessarily blame the Government for what is taking place in the art industry or the lack thereof," she said. "What people do not understand is that the Government works for us," she explained. "If we (the people) start the change, begin the movement, they (the Government) will have no choice but to listen and support, so it has to start with us." The artist who has also been in the business professionally for three years, reiterated the fact that young artistic talent in Jamaica is not recognised enough. "If you don't have platforms like these (Young Talent exhibition) you will always be a nobody. I mean the veterans, people who have made a name for themselves in this business have done so because of the opportunities they were given to showcase their talent." She also went on to explain that a lot of young, talented local artists have chosen to migrate to other countries in an effort to build sustainable careers. "A lot of them believe they can't stay in Jamaica because of how Jamaicans view art," she said. "Jamaicans look at art as a hobby, so when they approach you to do stuff for them and you tell them how much you are charging them for your own talent, it is frowned upon, but when you go abroad you are more appreciated and your work is valued more." She went on to say that Jamaicans only recognise talent after people make a name for themselves outside of Jamaica. "As soon as you go outside of Jamaica and make a name, that is when Jamaicans begin to recognise your talent and your worth and that's when they want you, that's sad."

And Nattoo agrees, as he says, "Getting paid for your work in Jamaica is an issue and getting paid what your work is really worth, is an even bigger issue."

Cosmo Whyte, another of the exhibition's featured artist, also weighed in on the issue. While agreeing that there is a greater appreciation for art overseas, he believes that local talent can stay in Jamaica and build a sustainable career. Citing Emily Patterson as example, Whyte said the feat can be accomplished, as persons have done it before. He went on to explain that while success in the art industry depends heavily on Governmental support, the support from family - specifically parents, is also a contributing factor. "I would advise parents to take a leap of faith with their children if they express an interest in art as a career. Although there is a great deal of financial insecurity, do not discourage them. Have them engage with institutions such as the NGJ, where they can meet other young people like themselves while learning the history of Jamaica's art industry."

The NGJ has intermittently held Young Talent exhibitions since 1985. In 2010, the exhibition featured artists such as Ebony G. Patterson, Phillip Thomas, Leasho Johnson and Oneika Russell, who have made significant contributions to the country's artistic landscape.