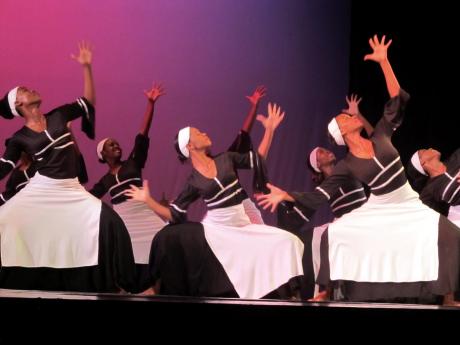 Marcia Rowe
A scene from the second movement of ‘Glorious Days’ (2002), choreographed by Barbara McDaniel. 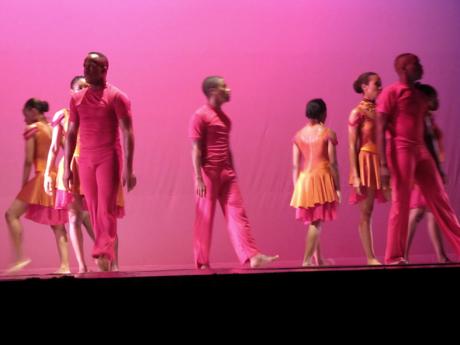 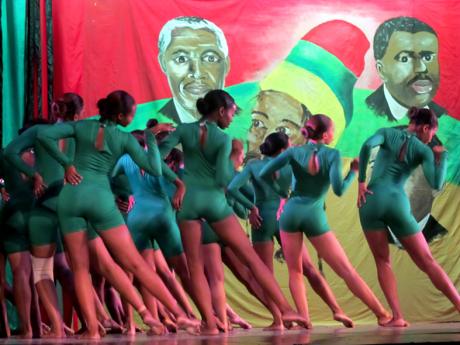 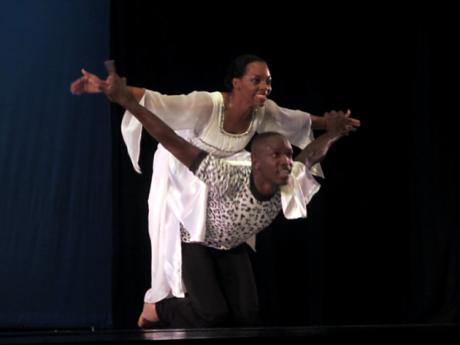 Marcia Rowe
Marcia Rowe Another scene from tyhe first movement of Glorious Days (2015), choreographed by Orrette Beckford, who is one pof the dancers, along with Renee Grant. 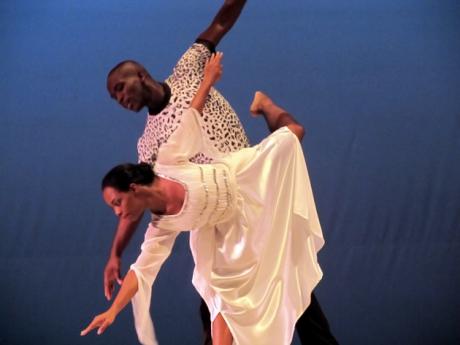 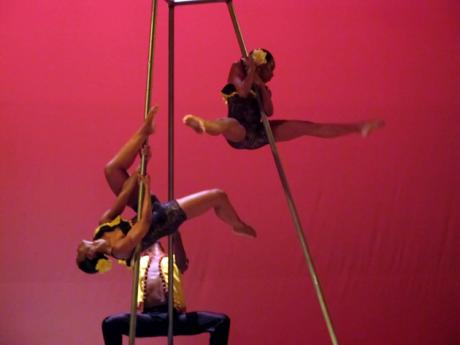 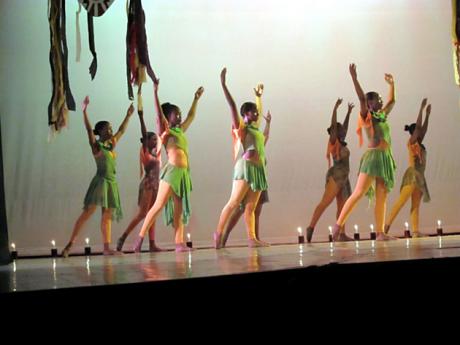 Saturday's opening night of Dance Theatre Xaymaca's 20th anniversary season had the audience at Little Theatre, Tom Redcam Drive, St Andrew, in emotional bliss. This was mainly due to the different styles presented by the cadre of choreographers and talented dancers at their disposal, complemented by effective use of costumes, lights, set and props.

The experience began with Kirk Rowe's Evolution, first choreographed in 2001. With lit candles in hand and clad in unitards, the dancers emerged from both wings on to a dimly lit stage with three huge masks hanging above its centre.

Moving in diagonal lines to the steady rhythm of pulsating drums, step by step they advanced towards the back of the stage.

After carefully placing their candles on the floor, it was time for the dancers to illustrate "the beginning, the heartbeat of Earth. Oneness with life."

This was done through a progression of exploration of levels (with performers at different heights on the stage), body extensions and several formations.

Duakhamba, done to a Latin beat, continued the exploration of levels, the dancers aided by a huge triangle placed at the centre of the stage's front.

Performed by Jeunette McNeil-Manley and RenÈe Grant, the dance had been choreographed by Natalie Gallimore for Xaymaca's 2014 season. The two dancers continued the programme's evolution, but showed its progress at a higher level, symbolised by the triangle's height.

However, to achieve this growth there seemed to be a need to get some energy from below. This was done with two poles placed at the back of the stage.

Then it was time for Glorious Days, created in three movements by as many choreographers. Orrette Beckford's 2015 work commenced an ode to religiosity. To achieve this, Beckford teamed up with Grant and both gave strong performances.

Barbara McDaniel, artistic director for the dance company, was responsible for the second movement. She used the company of dancers, wearing black and white costumes, moving them in groups on and off stage to the LeAnn Rime's a cappella version of Amazing Grace. The dance brought the set, comprising a brick wall effect and boasting a cross, to life.

Rotation, choreographed by Arsenio Andrad in 2002, followed. Utilising a small group of dancers, it too was well placed on the programme and provided the by now customary emotional tug.

The audience, now on the verge of exploding in delight, found an outlet in the first segment's closing dance, Slap Weh. Choreographed by the Dance Theatre Xaymaca and the second of the three 2015 pieces on the programme, it was high in energy and infectious. It was not surprising that Slap Weh had the house screaming to every move made by the dancers, who also seemed to enjoy the Jamaican dance moves.

Section two of the show was just as compelling as the first and saw dances choreographed by Michael Holgate, Onajae and Natalie James, along with McDaniel and Beckford.

Holgate's Riddim Born (2007) picked up where Slap Weh ended with energy and choice of movement. And while Onajae's Memoirs of the Abused stirred mixed emotions, that did not distract from the excellent choreography, Onajae and Gillian Lee's strong combined performance and the effective use of lights and costumes.

Freedom Song was the closing dance, for which the usually black wings were transformed to black, red, green and gold. Divided into six movements taken from various Xaymaca seasons over the years (including one from 2015), it too, was a serving of delightful movement, formation, liveliness and costumes. The choreographers were James, who was responsible for the second movement, and McDaniel, who choreographed the remaining five.