Divas Shine at Jazz in the Gardens 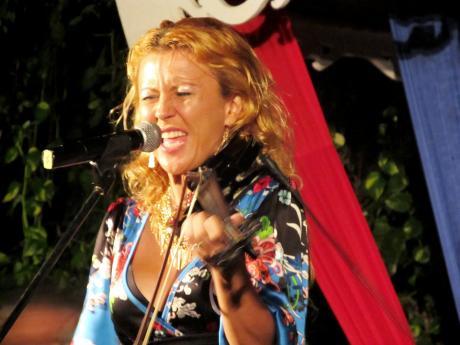 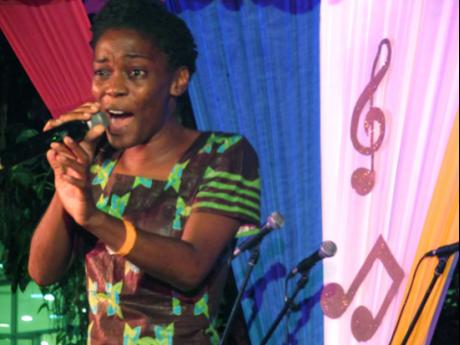 Despite the wet conditions due to earlier rainfall, a good-sized audience showed up for what was promised to be a musical treat of Jazz in the Gardens, 'A Feast for the Senses', on Sunday. The divas (Myrna Hague, Althea Hewitt, Kathy Brown, Azuri, Judy Emanuel, Diamara Neil-Walker and Orisha Sound) in chapter two of the bimonthly saga, were entrusted with the responsibility of meeting the high expectations. And they did, in one accord. Fusing a variety of other genres of music with jazz, they entertained with modified degrees of aplomb, grace and style.

Dubbed Jazz Divas Chapter 2, the show, staged on the lawns of the Pegasus hotel Gardens, New Kingston, got off, as is customary, promptly at its scheduled starting time. When The Gleaner arrived, opening act, psychology major student Azuri, was in the state of prepping the audience for what was to come. Soon after, she closed her set with the song Through the Fire.

Neil-Walker followed. Attired in a calf-length ethnic print skirt with matching blouse, the Jamaica Cultural Development Commission 2015 Gospel winner's appearance was a contrast to Azuri's short, body-hugging dress. Her movements on stage and the contortion of the face to produce the first set of notes must have had some wondering too. But all was forgotten when she stayed true to her style and delivered notes that came from her toes up through her mouth, to give a heartfelt rendition of That Name is Jesus.

But the 'unassuming' had more in store. "I like to jazz up gospel songs," she confessed before giving a taste of what she meant with a standing ovation performance of a jazzed-up version of His Eyes are on the Sparrow. Shouts of 'Encore!' followed her departure from the stage, and so she returned to deliver a jazz version of Swing Low Sweet Chariot.

She was to return later to give another jazz version of the Happy Birthday song.

After intermission, Hague, Brown and Hewitt performed. Hewitt, in perpetual motion, made her entrance from audience centre. In a long, flowing skirt, she gave an energetic performance of Street Light, her opening number. It was, however, her closing song, You're Simply the Best, that had the audience wanting more from her. She obliged with Next to Me.

Brown was the penultimate act. She began her set singing (as well as playing the keyboard) When I Fall in Love. She then played an original piece, By Sunday, on keyboard, but not before sharing an interesting story on how the song came by its title. And Brown closed with her delightful jazz arrangement of the Jamaican folk song Sly Mongoose.

Finally, it was time for one of the divas of Jamaica's jazz, Hague. Interspersing insightful information between songs, she was impeccable in her song selections and vocals. Accompanied by Marjorie Whylie on keyboard, her selection included The Way We Were, That's Life and Falling in Love. Before singing Bob Marley's Waiting in Vain, Hague described him as a great writer of love songs. She also complimented the younger singers on the show, saying because of them, "good music is alive and well". Hague closed her set with a fine delivery of St Louis Blues.

But the final act for the evening was the singing of One Love, performed by Diamara Neil-Walker, Orisha Sound, Azuri and Althea Hewitt. They were backed by musicians Obed Davis, Paul Madden, Brandon Benjamin and OZOUN'E.