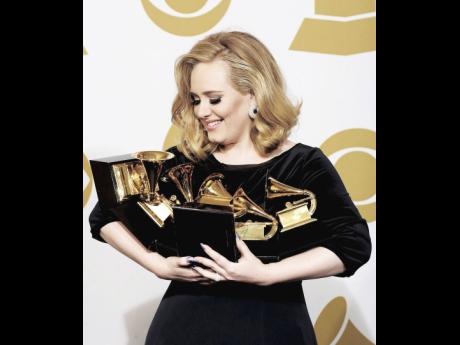 Adele is the top musical act in the United States, catapulting from No. 49 to No. 1 on the Billboard Artist 100 chart. Her placement at the No. 1 spot was sparked by the record-breaking climb of her new single, Hello, which ousted The Weeknd from the No.1 position and also prevented Drake from tasting his first solo No.1 on the Billboard Hot 100.

Hello is now the first song to sell a million downloads in one week. Also reaping success on the Billboard chart is DJ Khaled, who is now No.1 on the Billboard Independent Albums chart. The producer who signed dancehall artiste Mavado to his label - We The Best Music - in 2011, told media recently that he is focused on putting out quality music.

DJ Khaled's album is called I Changed a Lot, and features a single from Mavado titled My League, produced by Good Good Productions. Mavado himself has failed to climb the Billboard chart in recent times, even with features from Nicki Minaj and Future on singles Give It All To Me and I Ain't Going Back Broke, respectively.

In the meantime, VP Records continues to hold the No. 1 spot on the Billboard Reggae chart with Reggae Gold 2015 after 15 weeks. The record label also holds the No. 3 spot with the sister project called Soca Gold 2015.

Jah Cure saw an increase in sales for his album The Cure recently, and this resulted in the album jumping from No.7 to No.4. Kranium, on the other hand, fell to No.8 after just two weeks on the chart.

Interestingly, this is one of the few weeks that no Marley-related albums are in the top 10 of the Billboard Reggae album chart.