'The Hardweares' take over TV 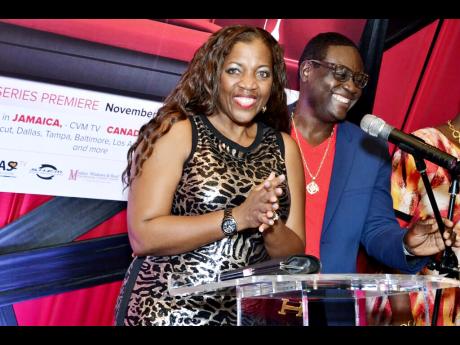 Reggae star Singing Melody is giving his fans a treat. The singer, who has been a major performer on reggae's global stage for decades, is bringing his life to television, and he's not leaving his effervescent wife Ruby behind.

The two will feature in a new television series - The Hardweares - starting on CVM-TV and CEEN TV this month. It can also be seen on MAS2 TV globally using Video On Demand. The show is a reality series where family and music meet home and garden.

The Hardweares aren't your typical couple. It's celebrity living with a hard-nosed businesswoman who is trying to live a somewhat normal life. But what Ruby considers normal is very different from what Everton is accustomed to. The series is built around veteran singer, songwriter, producer and promoter Singing Melody (Everton Hardweare) and his wife, Ruby Robinson-Hardweare, who is an IT and telecommunications executive - an unlikely couple who met and fell in love some 10 years ago.

They are both passionate about their individual careers and, despite having diverse viewpoints, their love for each other has kept them going. The show follows the couple across the US, Canada and the Caribbean as Singing Melody further builds his career with Ruby's unwavering support.

The three pillars on which the Hardweares series is built are: the romance between Everton and Ruby, Everton's music career and the dream house they've been building over the past few years.

"What fans will see is the various sides of me. They'll get more than just a sneak peek into the ins and outs of my daily routine. They'll get a front-row seat to see how Ruby and I make tough decisions about the house and my career, even though most times it's a tussle," said Singing Melody, with a sly chuckle.

The Hardweares has a powerhouse award-winning production team that is known for producing riveting and entertaining television. The Panache Entertainment team that produces The Hardweares is headed by senior producer Angela Thame, an Emmy-winning producer who has won awards working on the 'Oprah Winfrey' show. She is supported by producer Sonya Stewart, who has several local Press Association of Jamaica and Fair Play awards, along with an Emmy award she won for a gripping documentary on Lee Boyd Malvo. Also on the Panache team is award-winning videographer and editor Dorian Clarke.

The Hardweares makes its television debut with simulcasts airing in Jamaica, New York, Los Angeles, Dallas, Tampa, Boston, New Jersey, Toronto, Philadelphia, Connecticut, Baltimore, Palm Springs, Florida, and several other markets. The show airs on CVM-TV in Jamaica and on CEEN TV in the USA and Canada on Saturdays at 10 p.m. Each episode is 30 minutes. The season runs 13 weeks from November 21, 2015 to February 13, 2016.