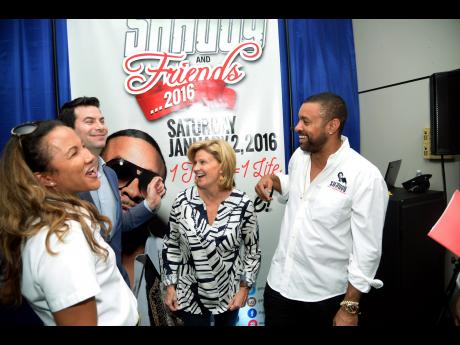 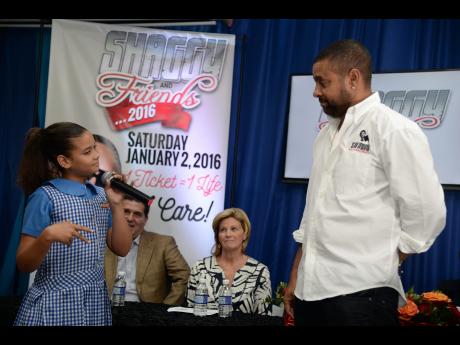 Jermaine Barnaby
Shaggy (right) listens closely as Simona Saure sings at the launch of the 2016 Shaggy & Friends concert at the Bustamante Hospital for Children in Kingston on Monday.
1
2

Reggae superstar Shaggy has secured the support of international companies iHeartMedia and FIAT brand for his Shaggy & Friends Benefit Concert set to take place on January 2, 2016.

The event will be held on the lawns of Jamaica House, and according to Shaggy, his new friends will expose the show to more than 200 million viewers through delayed streaming.

iHeartMedia has the largest reach of any television or radio outlet in the United States with more than 245 million listeners each month. The company also has more than 700 million downloads and reached 70 million users faster than any other radio or digital music service, including popular social-network site, Facebook.

According to Shaggy, the collaboration with iHeartmedia and FIAT will open doors for the growth of the five-year-old event, which was launched at the Bustamante Hospital for Children on Monday. He also said the city of Kingston stands to benefit from the promotion.

"Every dollar from the show has always gone towards purchasing equipment and supplies for the hospital. That is why we say one ticket equals one life. So if we find additional streams for people to assist, especially from people who cannot attend the concert, we welcome them with open arms. Our partnership with iHeartmedia and FIAT expands our capacity to do that exponentially. They might not be able to attend the show, but they will get a chance to donate if they can," said Shaggy.