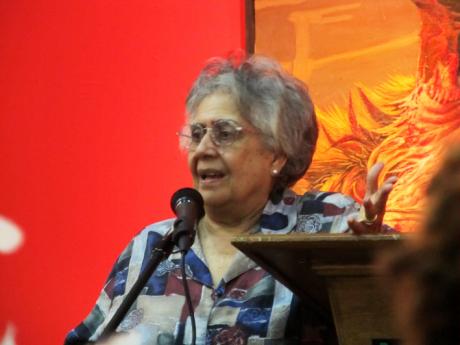 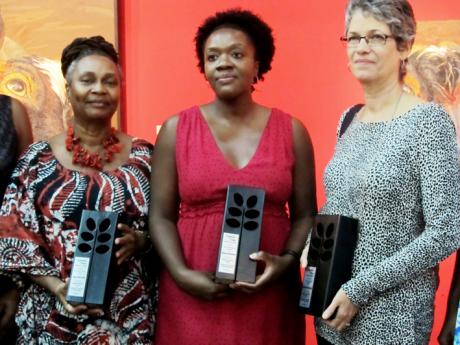 All three are already winners of various awards, for their written works, but their tally recently increased when Donna Hemans, Diana McCaulay and Janet Morrison were declared winners of the 2015 inaugural staging of the JaWS JAMCOPY Lignum Vitae Writing Awards.

Fittingly, the awards were named for three Jamaican iconic writers of different genres and as such, represented three categories. In the category for children up to 12 years old, Morrison, walked away with The Jean D'Costa Award for her manuscript, A Better Me: A Better You. McCaulay received The Vic Reid Award in the young adult category for her novel, Gone to Drift, and Hemans took home The Una Marson Award in the adult category with, Tea By the Sea. Each received a trophy made from mahogany along with a cash prize.

After their triumph, the inaugural winners spoke with The Gleaner. Needless to say, they were feeling "great", "wonderful" and "joyful". However, the source of their inspiration varied. For Morrison, it was the friends and schoolmates of her children; McCaulay who is an environmental activist, had her work grounded in her cause and Hemans was inspired by a caller on a local radio show. However, they all cited the number two, as the time it took them to write their respective manuscripts.

McCaulay shared that "It probably [took] about two years. It is a story of a boy whose grandfather is lost at sea and he decided to search for him."

Hemans, who was feeling wonderful, had much to celebrate. "There were five people and I had a one in five chance," she said before admitting, "I can't remember when it [her manuscript] started, probably two years ago. I was here in Jamaica and I heard a story on the radio where people call in to find relatives and friends who they have not been in touch with for a very long time and there was a woman who called in because she had not seen her son. The father had taken the son and she had no idea where the child was. And so, I took that story and build on a story that I had started and just did not know how to finish."

But for Morrison who has been writing from her first form days at Alpha Academy High School, it was a shorter two. "Actually it took me two days," was her surprising response. "I put myself to the test. I saw the awards earlier and forgot about them. I kinda just put my head down. The ideas have been in my head," she explained.

Her winning manuscript, a collection of short stories, is dedicated to children with special needs. She explained that her children went to a school where special needs children were in the main stream. And it made such a difference with how they interacted with everybody. And the other students just treated them like "anybody".

The three winning titles were chosen from a short list of nine, the adult category being the most competitive. Five titles were nominated for this award. However, the organisers received 50 entries in total, but a number of them did not make the cut for a variety of reasons.

This and more were revealed, to an intimate size, specially invited guests at a recent ceremony held at the National Gallery, downtown Kingston.

The programme saw various judges providing background explanation, along with greetings and remarks from the organisers of the awards, Jamaica Society of Writers (JaWS) and the Jamaican Copyright Licensing Agency (JAMCOPY) delivered by representatives, Tanya Batson-Savage and Diane Daley-McClure, respectively.

Jean D'Costa, the only living writer of the named three, was the guest speaker.

She was witty and captivating. "The stories are just getting ready to multiply. I think we are at a threshold in Jamaican life and we are one of a kind in poetry, drama and fiction, and there are a lot more coming. And it is going to come in all different forms," she said

In addition to the speeches and presentations, the short but enjoyable programme delivered an opening performance from Tribe Sankofa, the reading of excerpts from the winning manuscripts and a very amusing stage reading of Anthony Winkler's The Duppy. This was in tribute to the writer. The Host for the evening was Dahlia Harris.

JaWS JAMCOPY Lignum Vitae Writing Awards, is a revitalisation of the National Book Development Council (NBDC) event. It will be a biannual event.