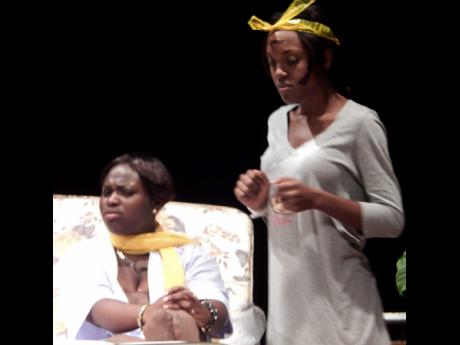 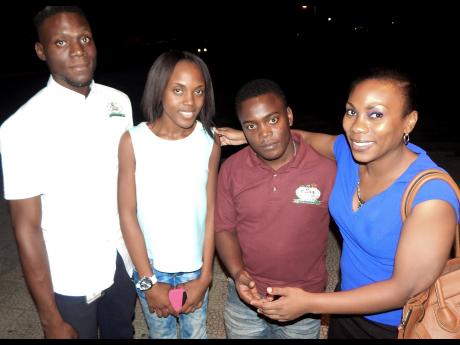 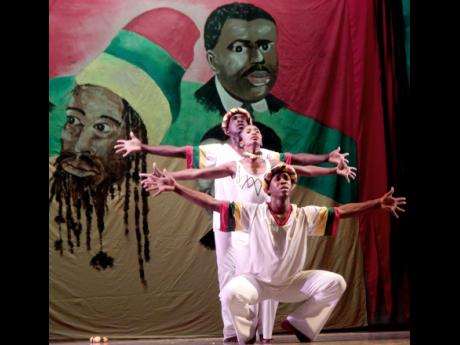 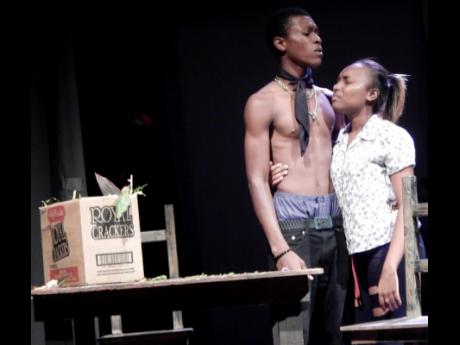 Michael Reckord
A weed-dealing father (Junior-Lee Jackson, left) and his daughter (Faybenelle Williams) in ‘Love on the Battlefield’. 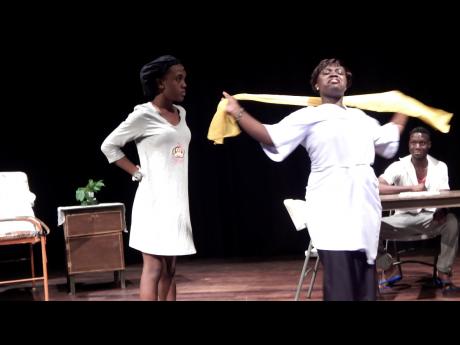 Shortly after the DTX season Tallawah, the annual drama competition mounted by the University of the West Indies (UWI), Mona, began its three-day run at Philip Sherlock Centre for the Creative Arts (PSCCA). On the one night attended, the offerings were dark, less colourful and entertaining in a very different way than DTX.

Still, the DTX concert began in near darkness. Only a row of candles far up stage (to the back of the stage) enabled us to see the dancers' silhouettes. To the pounding drums they performed Kirk Rowe's 2001 work, 'Evolution'. It served to show off, especially in the brighter lights that came up later, the general fitness and competence of the dancers.

The longest of the dances in the first half was 'Glorious Days', a gospel-filled work choreographed at three different times. Interestingly, the second and third movements were created by Barbara McDaniel (DTX's founder and artistic director) in 2002. The first movement was choreographed by Orrette Beckford and Nicholas McPherson this year.

Religious music was the only thing tying movement one - a dance in front of a church by a loving couple (Beckford and Renee Grant) - to the other two movements. The first has a context, marriage; the others are abstract.

The religious tone of that dance was in sharp contrast to the pagan flavour of the dance which followed, Arsenio Andrade's 'Rotation' (2002). Leaping, arms thrusting skyward, the dancers obeyed the instruction of the song to which they moved, Follow the Sun.

The dance which closed the first half, 'Slap Weh' (2015), took the concert even farther away from the spiritual. A dancehall piece choreographed and performed with abandon by members of the company, it elicited screams from the gyrating dancers' teenaged friends in the audience.

The main dance in the second half was 'Freedom Song', another work that was created over a number of years - 2000, 2003, 2011 and 2015. McDaniel choreographed five of its six movements and Natalie James one. A tribute to Bob Marley and danced to Jammin', Exodus and Simmer Down, among others, the work is largely celebratory. Still, with the appearance of a man with a long whip, there is a hint of slavery's oppression.

Plays and a monologue

Of the six Tallawah presentations I saw three were short plays, each interesting in its own way. One of the other pieces was an amusing monologue in which an actress portrayed two characters - one a patriotic Jamaican who sports the national flag's colours, the other a dancehall devotee.

It was followed by an anguished poem in which an aborted child berates his mother for her action and, later, a dramatised dub poem showing a young woman being terrified by the skeletons in her closet.

The first play, Love on the Battlefield, was presented by students of Excelsior Community College's School of the Performing Arts. It is a melodramatic work about a young man and woman from two different sections of a community who fall in love, but have difficulty sustaining the relationships because the community's gangs are at war. A Jamaican version of Romeo and Juliet, it ends even more tragically than Shakespeare's play, as a battle between the gangs leaves the stage littered with bodies, the lovers' corpses among them. It sounds sad, but the acting was so over-the-top that I laughed throughout.

Free, a comedy written by lecturer Dr Amorella Lamount for her students at the College of Agriculture, Science and Education (CASE) and directed by student Calvin Forbes, is set in Rosemont Asylum and shows the not-so-crazy actions of three inmates. They are Adolphus (played by Cornelius Kennedy), Sonia (Shavance Clarke) and Maria (Tiffany Cope).

Maria insists that she is from the upper class. The others try to pull her down, not out of spite, but because they want her to be content in the asylum.

The Vocational Training Development Institute's (VTDI) play, The Meating, written by student Stephan 'Israel' Woodbine and directed by students Daniel Grant and Lisa Brown, shows what happens to a couple after their plane crashes on an island inhabited by cannibals. It ends with the woman about to spear her husband, who has been tied to a stake. He is to be cooked and eaten.

Comparing this year to previous ones, chief judge Michael Daley told me that he was disappointed that there were no applicants in many categories. (He was not referring to overall registration, for Tallawah coordinator Tyane Robinson said that there were more than 35 applicants overall.)

Daley said he was happy with an increase in the number of plays, even though no play was judged good enough to get the Best New Play award. He said he wanted to encourage more theatre-loving individuals and groups to enter the Tallawah competition, as it allows for much more experimentation than commercial theatre.

"There are millions of stories out there to be told, in fresh ways," he said, going on to cite one play that impressed him, Kristallnacht, by Desmond Dennis. "It is set in Germany, just before World War II and the playwright draws parallels with the atrocities that took place then with atrocities happening now," Daley said.

The other judges clearly also liked the play, for it got a high commendation, as did Love on the Battlefield. CASE's Clarke was named Best Supporting Actress.