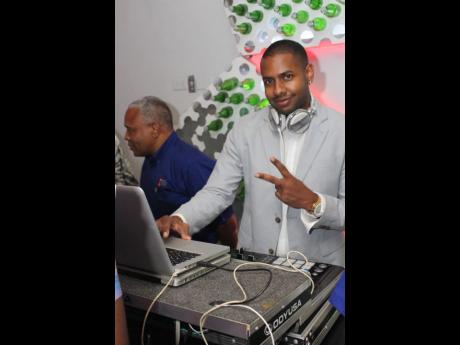 According to the promoter, he has been paying keen attention to the EDM genre since the early 2000s and, while he has worked with Major Lazer on their annual show – Major Lazer in concert – he has plans to host even bigger events locally as well as dabble in production.

At present, there are at least three popular EDM events held locally, including Colorfest, the Electric Butterfly Music Festival (EBMF), and Major Lazer in concert.

Following Billboard’s recent acknowledgement that the genre was born in Jamaica out of the work of King Tubbys and King Jammys, the island will now host its first major three-day EDM festival – Paradise Lost – in 2016 and already, King Jammys has been listed among a strong line-up that includes international acts.

As an event promoter always looking for new ideas, Bankay says Jamaican promoters are jumping on the EDM wagon.

“I think it’s great for the EDM scene here because it helps to educate and entertain and people will develop a love for the scene. I never expected to do this by myself, so anyone that comes with a new EDM party or festival helps my overall vision for the local entertainment industry and also the tourism industry. I think when I took the risk of doing a mainstream EDM event with the first Major Lazer show, it paved the way for others to see that Jamaica is ready to jump on the EDM bandwagon. Then the gates were open and many other EDM events started popping up, and I hope many more will come along,” he told The Sunday Gleaner.

Bankay says fans of his style of music were surprised that he possessed the skills to deejay. However, his work gained the respect of those who dared to indulge. According to Bankay, he has played EDM music in several Caribbean countries as well as Europe, Mexico, Miami and New York.

Not totally surprised that EDM is finally getting its due recognition in its birth country, the DJ-promoter believes he is entitled to some sort of recognition for the level of commitment he directed to its promotion in Jamaica.

“I think I helped to move EDM to mainstream. I’ve been fairly successful as a businessman in my field and I think people know and trust that, so if they see me pushing and working on a new direction, they know it’s gonna be the next big thing ... the (EDM) DJs, were mostly European, so it seemed like a world away, but there was something in the music that was undeniable, and it was calling me. Then I went to my first EDM concert and, at that point, I knew I had to work in that genre somehow,” he said.

Bankay has already rubbed shoulders with EDM heavyweights like Major Lazer, Skrillex, DJ Snake, Hardwell, Nicky Romero, Armin van Buuren, Chuckie, Martin Garrix, Kaskade and The Partysquad. He also feels that Jamaicans should be more involved in the production process and advised persons to travel more so as to expand their experiences.

“The promoters should take risks and innovate. You never know where that road might lead you. You might redesign and change the industry. To the aspiring EDM DJs, produce original and distinctive music. That’s the only way to get noticed in the EDM world. I will be doing bigger shows with the biggest and best artistes in the world and producing my own EDM music originals and remixes alike, then playing all over the world,” Bankay told The Sunday Gleaner. The Electric Butterfly Music Festival (EBMF) will be held on December 19 at Pier 1 in Montego Bay and will feature Grammy Award-winning EDM act Matthew Koma..