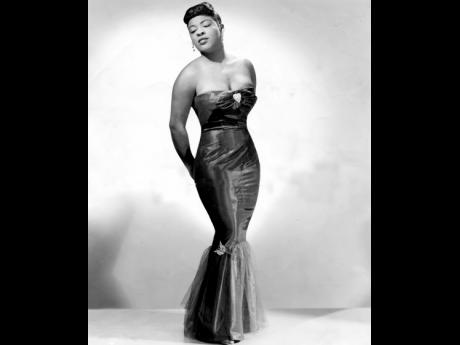 Like all the giants of Rock and Roll's first generation, Lavern Baker began her career long before the explosion of Rhythm and Blues music. History has it that the day she was born, there was a parade in Chicago, the town of her birth. It was not a celebration for her, but it certainly was the appropriate atmosphere that set the tone for a life and career that has been a lively and colourful whirl of activity, excitement, and inspiration ever since.

Possessing an insatiable appetite for music from an early age, Baker rushed through school, longing for an opportunity to face a big audience and the bright lights.

Her earliest inspiration was the Church, where she was a soloist in the choir from age 12. Many a Chicago religious setting at the time was characterised by dramatic musical scenes, permeated with lively dancing, hand-clapping, foot-stomping, and soul-stirring activities that could easily lead churchgoers into the secular world.

Dozens of early Rhythm and Blues artistes began in the Church, and Baker was no exception. Ambitious and highly talented, with good looks to go along, she had the personality that forced an audience to look and listen.

Her singing talent really began to assert itself at age 17 when she was drawn to the busy music scene of her hometown by acquiring a resident job as a featured vocalist at the 600-seat Club Delisa.

Her stage-name then Little Miss Sharecropper, implying that she was from the lower class, may at first have seemed derogatory, but it indicated that her music may have been closer to Rhythm and Blues than many of her black female contemporaries like Sarah Vaughan, Ella Fitzgerald, Dinah Washington, and males Nat King Cole and Billy Eckstine, who were all achieving enormous fame far beyond the ghettos.

Whites were mainly drawn to the later-to-emerge Rock and Roll scene, which, ironically, Baker helped to shape.

Musically speaking though, in those early days, the dividing lines between R&B and Rock and Roll were virtually non-existent, and most times, it was the colour of the artiste's skin and that of the audience's, that determined a song's classification. More often than not, a record that sold heavily to blacks would be an R&B, while one that whites mostly bought was Rock and Roll.

The choice of Baker as our Music Diaries Heroine for this week was quite deliberate as it was in this very month of November (the 11th) that she was born 86 years ago.

Strangely, it was as a jazz balladeer, which was more the domain of whites, that Baker began to make her way. Doing the rounds at several night clubs, Baker developed a wide repertoire of impressive blues and pop songs to complement her jazz selections. It augured well for her next move, which was to get into the recording studios.

Her performances at The Flame Show Bar in Detroit was of such that it led the manager, Al Green (not the R&B singer), into signing her to a personal management contract and began laying long-term plans for her career. His efforts landed her at King Records before switching to Atlantic in 1953. In the interim, Baker went on an overseas tour, which earned her an appreciable following, loads of experience and some recordings, one of which, Living My Life For You, became a moderate hit in the South.

But it was her stint with Atlantic Records that propelled her into perpetuity.

The year 1953, apart from being Baker's inaugural year with the label, and the label's second female act behind R&B star Ruth Brown, was a vintage year for girl singers. In addition to the Vaughans, Fitzgeralds, and Washingtons, dozens of white singers were riding high on the charts. Doris Day, Kay Starr, Jo Stafford, Teresa Brewer, Rosemary Clooney and Joni James are just a few.

In the midst of this intense competition, Baker ruled the R&B genre with a plethora of top-class recordings that spanned both the up-tempo and the slower and more subdued style of Rhythm and Blues. Her up-tempo delivery of Jim Dandy in 1956 became her most enduring number. Topping the R&B charts and reaching No.17 on the pop charts, it told the story of a man (Jim Dandy), who rescues women from serious predicaments:

Jim Dandy on a

He got a lady on a

Jim Dandy to the rescue.

She was feeling kind of blue

never liked to see a

Jim Dandy to the rescue,

Baker's first major hit, however, was the 1954 Winfield Scott-penned novelty song Tweedlee Dee, which crossed over to the pop charts in 1954.

To my mind, however, Baker was at her best on the slower numbers like I Cried A Tear, Play It Fair and Soul on Fire, which exhibited her soulful mood with a playfully husky, but trembling voice. The last mentioned number was, in fact, her debut for Atlantic Records, which she co-wrote and recorded on June 19, 1953, at the company's studio in New York. The soulful style of I Cried A Tear in 1955 was later echoed in early Jamaican R&B songs like Worried Over You by Keith and Enid, and Every Night by Joe White and Chuck, and presaged the emergence of the soul boom of the 1960s. The recording of I Cried A Tear, let alone Jim Dandy, was perhaps her most popular song among Jamaicans. I can remember as a child, hearing people in every nook and cranny singing:

'I cried a tear because of you

I cried a tear because

I cried a tear.

What else can I do

but cry and sigh for the

Baker scored more hits with Shake A Hand, If You Love Me, I Can't Love You Enough and a soulful treatment of the blues standard C.C. Rider in 1962. Diagnosed with diabetes in 1992, she suffered leg amputations and died five years later from heart complications.