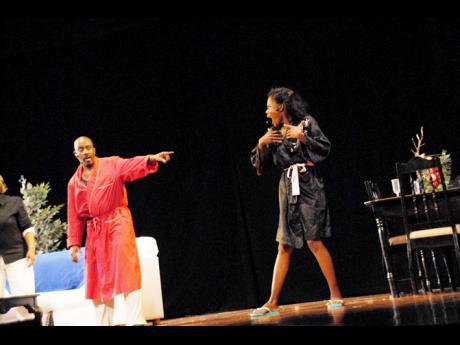 Contributed
George Leveridge (left) and his love interest, Pastor Tassie, in a scene from ‘Amazing Grace’. 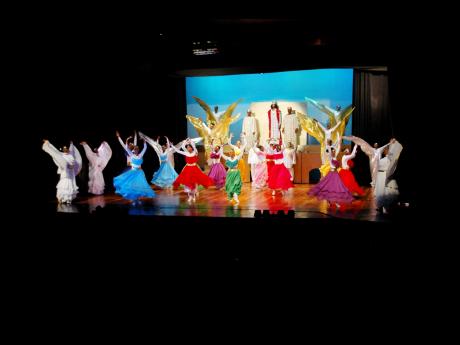 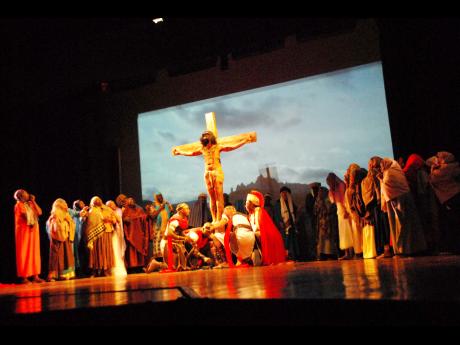 Contributed
Jesus Christ, played by Daniel Chen, hangs from the cross in the crucifiction scene of ‘Amazing Grace’. 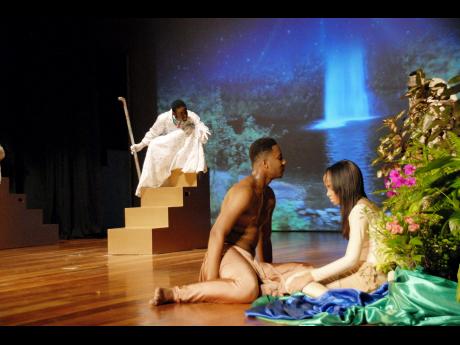 Contributed
Members of the cast of ‘Amazing Grace’ re-enact the story of Adam and Eve in the Garden of Eden at the Little Theatre, Tom Redcam Avenue, St Andrew, on Sunday afternoon.
1
2
3
4

On Sunday, scores of patrons turned up at the Little Theatre to watch Dr Mary Banks' gospel play, Amazing Grace. By the night's end, they were treated to much more than a dramatic production.

Of course, there were song, dance and drama, but what people seemed to enjoy most about the production was the message behind the entertainment.

Amazing Grace turned out to be ministry and a blessing, as some audience members described it.

The play chronicles man's struggle with sin since the beginning of time. Not only does the play depict how sin was first introduced into the world, but it also shows God's way out of a life of sin by retelling the crucifixion story. By graphically highlighting the suffering of Christ, the production reminded the audience that Jesus gave his life so men could benefit from salvation.

From the creation to the crucifixion to issues currently affecting society, the production had something in it to engage and entertain the entire audience. Issues such as struggles with sexual immorality, addiction, suicide and homosexuality were all addressed in the play's script. If an audience member was struggling with suicidal thoughts, for example, the message of Christ's ability to rescue mankind from sin would have overpowered any thought of condemnation.

The issues were addressed with such sensitivity that instead of feeling like an outcast, the message was that Christ could truly turn your life around. The production team managed to achieve its goal of reaching souls without condemning people for their sins. At some points during Amazing Grace, various audience members could be seen wiping away tears, unable to control their emotions.

It was clear that the cast and crew of Amazing Grace put much thought into the details of the production. Everything from the sound effects and graphics to the make-up, lighting and music came together brilliantly to make Amazing Grace stand out.

At the end of the play, an altar call was made and many people made their way to the stage to commit their lives to Christ.

The playwright, Banks, encouraged audience members to spread the word about the production as the organisers want to bring it back for further performances but can only do so if there are sufficient requests.

Amazing Grace had its debut run in Jamaica last weekend after completing numerous performances in several states across the US. It was written by Banks in 2002 and is a large stage production with a cast of over 80 people. All of the performers over the weekend - actors, singers and dancers - are Jamaicans, most of whom were trained through the Bible Teachers Academy of the Arts.