Startime returns for one night only 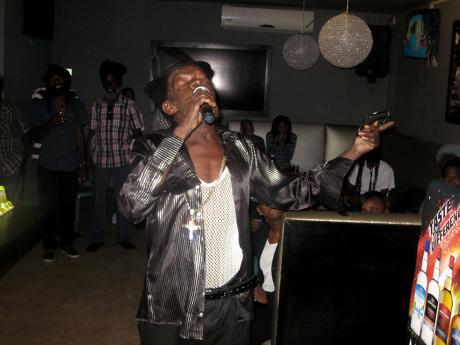 Dillinger performing a version of the National Anthem for Marcia Griffiths in honour of her birthday, which coincided with the launch of Startime at Spades Lounge, Phoenix Avenue, on Sunday. 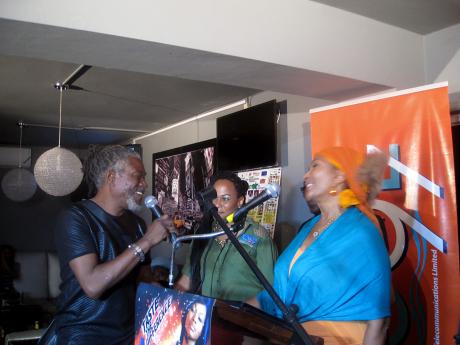 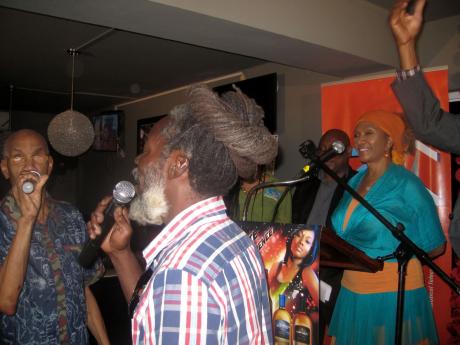 A smiling Marcia Griffiths (right) enjoys her birthday tribute from Frankie Paul (left) and Tabby Diamond of the Mighty Diamonds, with Startime co-organiser enjoying the company of the three performers slated for the concert in January. 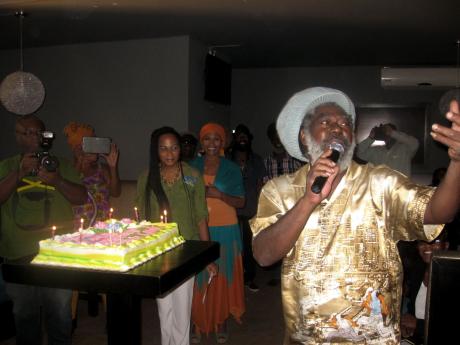 The printed advertisement for Startime, which takes place on Saturday, January 9, 2016, declares it to be for 'One Night Only'. When the concert (which is also billed as 'The World Famous Original') was launched at Spades Lounge, Phoenix Avenue, St Andrew, on Sunday evening, original organiser Michael Barnett expanded on the 'One Night Only' addition. After outlining Startime's history, Gregory Isaacs standing in on the first major show for John Holt who missed his flight, to the series being stopped after 18 consecutive years, a 17-stop European tour and 140 concerts, Barnett spoke about the return in 2013 with two shows. One was held at Liguanea Club and the other at Mas Camp.

"After the show at Mas Camp we thought that was it, over, done," Barnett told the audience.

However, the upcoming Startime return will also be at Mas Camp, National Stadium, due to what Barnett said was overwhelming public demand. It will be the 30th Startime Mas Camp concert (going back to 2000, when it was at Oxford Road, New Kingston) and it could be the last.

"This is a one-time opportunity to come out and party with the stars. We are not sure there will be another Startime," Barnett said.

The line-up for the 'One Night Only' is Marcia Griffiths, Horace Andy, Frankie Paul, Errol Dunkley, Leroy Sibbles, Johnny Clarke, Mighty Diamonds and Dillinger, with Lloyd Parkes and We The People as the backing band.

Save for Dunkley, a member of the Diamonds and band leader Parkes, all the named Startime performers were at the launch. Sibbles spoke on behalf of the artistes, saying, "I have watched Startime do so much for my peers in the business. Startime has kept reggae music alive for many years." Looking forward to the event, Sibbles said he is anticipating a night of "joys and no sorrow".

There are two major changes in organising Startime, as there is a new partner in Charles Simms and title sponsor in Monymusk Plantation Rums. Simms spoke at the launch, as did a number of sponsors' representatives, Barnett saying that he approached 16 organisations and only one declined. National Rums of Jamaica (Monymusk Rums producers), Kool 97 FM (whose Dianne Thomas hosted the launch), Interlinc Communications, the Creative Production and Training Centre, Chung's Catering Service, and Securipro all gave their official endorsement of Startime.

And there was a surprise for headliner Marcia Griffiths, who was marking her birthday, as the Startime organisers brought out a cake. Frankie Paul, the Diamonds, Dillinger (who did a version of the National Anthem), Horace Andy, and Johnny Clarke all did birthday songs for a deeply appreciative Griffiths, who shared the cake-cutting honours with Tracey-Ann Johnson, who was also celebrating her birthday.