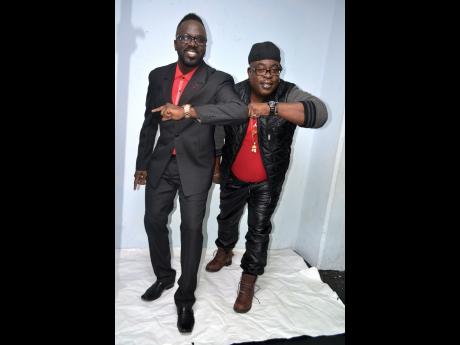 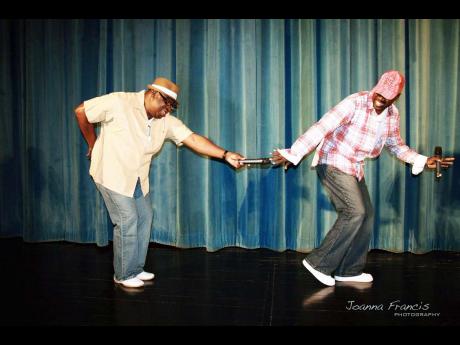 This Sunday, November 29, at 9 p.m., when the opening credits roll and the familiar voice of Noel 'Rozah Roze' Ellis is heard crooning the catchy "Go, go, go; go crazy wid di Ity and Fancy Cat Show" theme, for viewers tuned to TVJ, it will mark the one hundredth airing of the popular Jamaican sketch

As can be expected, this

landmark is the cause for much celebration for the dynamic and enduring duo that created the show, as well for as their executive producers. It means they have now achieved the enviable milestone of successfully completing eight seasons of production and enjoying eight years on air, which is a noteworthy first for any Jamaican-owned and produced, made-for-television project.

Through the over 400 skits, spoofs, songs, parodies, impersonations and hidden camera gags presented to date, the

production has showcased the talent of several of the biggest names in Jamaican entertainment and has provided a launching platform for the careers of many previously unknown performing artists.

For veteran comic, writer and director of Ellis International, Owen 'Blakka' Ellis, the score of '100, not out' is particularly significant.

"For me, it also means eight years of consistently contributing to the growth of Jamaica's creative industries by providing gainful and fulfilling employment for several actors, directors, producers, cameramen, light and sound technicians, wardrobe coordinators, make-up artists and more. That's one aspect I am especially proud of," said Ellis.

Blakka, who is also Ity's older sibling, has been an integral part of the evolution of the career of the duo, who readily acknowledges him as their mentor and guide, and often their harshest critic.

When asked to share his thoughts on their show achieving this 100th-episode milestone, Alton 'Fancy Cat' Hardware was emphatic and ebullient.

"Jah know, mi feel like a million bucks, mi nah lie," Hardware said. "Trust me. Only those who really know how far we a come from, and some a di things we go tru can fully appreciate how it feel fi reach this far, and wi still have further fi go!"

"Full hundred!" Ellis declared, as he shared his wish that his mother was alive to be part of this pinch-yourself moment, which culminates what he describes as a "remarkable journey of laughter, stories and characters - real and imagined".

Season eight will come to a close just around the Christmas holiday period, and as they mark the 'count-up' to 100 episodes and more, the

producers would not say definitively whether there will be a season nine.

They are promising more groundbreaking entertainment, however, with several new projects currently in the pipeline. Shanan Mullings, Romae Quarrie, Leighton Campbell and Gemmar McFarlane comprise the formidable team of talented young writers who have been injecting fresh ideas into the Ity and Fancy Cat Show, while working on a number of exciting upcoming projects for stage and television, as well as for the big screen.