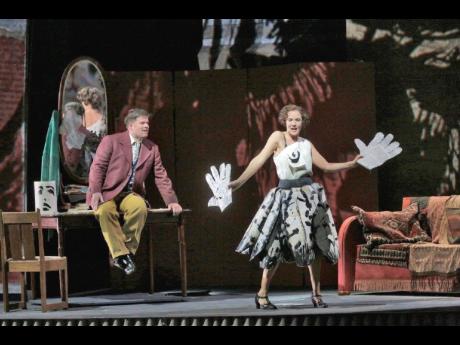 Contributed
Marlis Petersen (right) in the title role and Daniel Brenna as Alwa in Berg's 'Lulu'.

The Met: Live in HD continued its 10th anniversary season last weekend, with a live transmission of Alban Berg's Lulu. The four-hour production attracted an estimated attendance of 45,000 persons in North America, earning a gross of US$900,000.

It was seen live on more than 900 screens. An estimated additional 51,000 people saw it live on 800 screens in 35 countries in Europe, 11 countries in Latin America, Russia, Egypt, Israel, Jamaica, and Morocco.

The encore screening of Lulu in Jamaica is scheduled for this Sunday, November 29. Delayed showings throughout Asia, Australia, Dubai, Madagascar, New Zealand, and South Africa, as well as encore performances in North America and Europe, are expected to boost worldwide attendance of Lulu to more than 140,000.

The live transmission, hosted by Deborah Voigt, was directed for cinema by Matthew Diamond.

The Met: Live in HD, the Met's award-winning series of live transmissions to cinemas around the world, has expanded its worldwide distribution to more than 2,000 cinemas in 70 countries this season and has sold more than 19 million tickets since its inception in 2006.

Lulu was the fourth of 10 live transmissions to be shown this season. The next live transmission will be the Met's new production of Bizet's Les Pecheurs de Perles (The Pearl Fishers), on Saturday, January 16, 2016.

In celebration of the 10th-anniversary season, The Met will present a special encore holiday showing of Mozart's The Magic Flute. Under the baton of Met Music director James Levine, there will be a winning ensemble cast bringing fresh life to this timeless fairytale, presented in a shortened, 90-minute, English language version.

It will be shown in Jamaica on Sunday,

December 27. Tickets are now on sale for The Met Opera's 2015-16 season at the box offices

of the Palace Cineplex and via the web at www.palaceamusement.com, with a Palace Card.