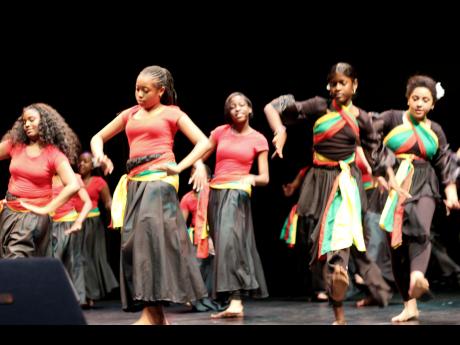 The Toronto Children’s Concert Choir and Performing Arts Company had its annual spring production and fundraiser on Saturday, June 6, at the Jane Mallett Theatre in the prestigious St Lawrence Centre for the Arts. This year’s concert, entitled ‘Get Ready’, is a celebration of gospel, cultural and inspirational music, African, hip hop, contemporary dance, and African drumming.

With more than 43 original productions done over 21 years, Wonderland Productions has cemented its place as a premiere children's theatre company in Jamaica. The company, founded by Alice Hogarth, a theatre enthusiast in November 1994, is this year celebrating its 21st anniversary. To mark the momentous occasion, a milestone - as described by Hogarth - the company is preparing to host its 44th children's production.

The play, entitled Annie at Christmas Time, is slated to run this evening at the Philip Sherlock Centre for the Creative Arts at the University of the West Indies. Hogarth told The Sunday Gleaner that the idea for the production came from the children. "The children sometimes choose what play they would like to do," she said. "They were very excited about the recent Annie movie, so we decided to do our own version to show during the Christmas season."

She explained that the prod-uction would be an adaptation of the 1994 version of the musical Annie and would include most of the songs and choreography from the movie but with her own twist.

"Well it will have most of the music people know from Annie, but with our own styling, so you will be in for a treat," Hogarth said. The play's script runs into 90 minutes, but she gives the assurance that it will be 90 minutes of drama, music, and excitement.

Hogarth also said that over the years, she has learnt that drama facilitates education. "I am an educator, a trained primary and early childhood education specialist. I spent over 20 years at Hillel Academy (Prep) teaching academics, but I also saw the need for children to discover and develop their creative talents using drama. I realised that it (drama) was a powerful teaching tool," she said.

"Research has proven that drama can contribute significantly to a child's growth and development as it allows the child to utilise all of his or her faculties, especially self-expression, which builds self-confidence and self-esteem. It is a very fulfilling experience when I can actually watch the children's confidence and esteem growing. The transformation is wonderful when they start to 'break out of their shell', realising their potential and talents. As an educator, quality education, in my view, is not all about the academics."

Reflecting on the 21 years her company has been involved in children's theatre, Hogarth says she is happy with the growth and development. "When the company started, it was a one-man show," she said. "I did everything, then the company grew and developed from strength to strength, and now, it's a whole professional team."

Hogarth also revealed her plans to take the company to the next level. "I now have a bigger vision for the company," she said. "It has become more open, and now any child from any school who wishes to join is welcome to do so."