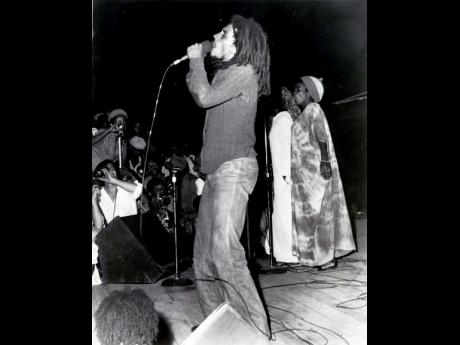 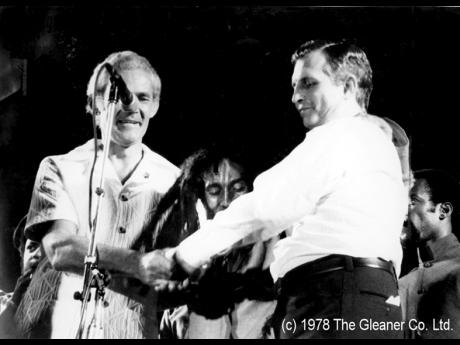 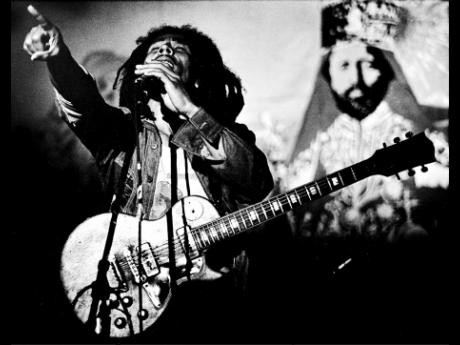 Contributed
A Peter Simon picture of Bob Marley performing with an image of Emperor Haile Selassie I in the background.
1
2
3

Bob Marley's heroics at two concerts in the 1970s stood out as two positives in a decade that saw three general elections wreaking havoc on a nation that clearly could not afford or manage that level of frequent elections.

Marley encountered a close shave on his life 12 days before the 1976 general election due in Jamaica on December 15. He was shot and injured, and many thought that the attack was politically motivated and had something to do with a concert that was due to take place at the National Heroes Park on December 5 during the height of a heated political campaign.

History has it that the concert was called by then Prime Minister Michael Manley, president of the People's National Party (PNP), to help ease the tension between opposing factions of the incumbent PNP and challengers, the Jamaica Labour Party (JLP).

Marley, a friend and neighbour of Manley, was seen as the ideal person to head the concert by virtue of Marley's sudden elevation to the pinnacle of reggae stardom with four unstoppable albums up to that point. Their close association logistically and socially would, quite understandably, lead many into believing that Marley had PNP leanings, and was using the concert to score political points for the party.

But Marley had repeatedly distanced himself from politics - whatever 'P' - and, in fact, warned against the dangers of such connections in his recording of Revolution as he chanted:

"Never make a politician grant you a favour

They will always want to control you forever

So if a fire make it burn

And if a blood make ya run."

NO NEED FOR VIOLENCE

Marley may perhaps have felt that by organising and participating in the concert, he could indirectly help to boost the PNP's support for Rastafarians and send a message that politics need not be violent. Indeed, Manley had begun to embrace Rastafarians, even using some of their slogans like 'Hail The Man' and 'Love', which gained him more support and admiration from Jamaicans.

The 1976 concert, labelled 'Smile Jamaica', was having its rehearsals at Marley's Hope Road residence when the tragedy struck on that ill-fated night.

Marley, his band, his wife Rita, manager Don Taylor, and friends were in attendance, when explosions interrupted the proceedings between 9 and 10 p.m.

Rita, Bob, Don, and a man named Lewis Griffith were shot, with Don being the most seriously injured.

Marley, who received a shoulder injury, though not recovered, still performed at the concert, attributing his motivation to his conception that if gunmen were not willing to take a day off, he didn't see why he should.

The recording that celebrated the free 'Smile Jamaica' concert, which thrilled an 80,000-strong jam-packed National Heroes Park crowd on Sunday, December 5, 1976, was one with that same name. Done by Bob Marley and The Wailers on their Tuff Gong record label about that same time, it was seen by some as a disguised call to vote PNP, while others viewed it as a call for unity. One could easily draw one's own conclusion as we run the lyrics down:

"Feeling out, feeling down

Then up came a one that said,

You're in Jamaica now

Come on and smile

Get it together now.

Soulful town, soulful people, said I see you're having fun

Dancing to the reggae rhythm

Cast away that evil spell

Throw some water in the well

and smile in Jamaica now."

Marley's recording of Ambush in the Night seemed to be a direct reference to the shooting incident:

"See them fighting for power,

But they know not the hour,

So they come with their guns,

Trying to belittle our integrity now.

They say what we know is just what they teach us,

And we are so ignorant that every time they can reach us,

Through political strategy, they keep us hungry.

And when we gonna get some food

Your brother got to be your enemy.

Well ambush in the night

All guns aiming at me."

Whether or not the alleged shooters would again be in attendance, it mattered little to Marley as he was back in Jamaica in 1978 for a similar concert dubbed 'The One Love Peace Concert' at the National Stadium on April 22. The highlight of that concert was the joining of hands of the charismatic socialist PNP leader Michael Manley and the astutely conservative JLP leader Edward Seaga as a symbolic truce that hopefully, their followers would embrace.

The rude-boy syndrome that emerged in the 1960s and lasted into the 1970s exacerbated the situation and added to the negatives of garrison politics, gun distribution, and a state of emergency from June 1976 until June 1977. It culminated in the death of more than 800 persons during the 1980 general election, which the JLP won.

Bob Andy, in his own inimitable style, seemed to have captured the political climate and the mood of the people in his 1974 Richard Khouri-produced recording Fire Burning in which he reflected:

"I was drawn into myself

Observing all this time,

From every angle I could see my people You're meeting hell.

so they die from time to time.

What have you got in mind?

I see the fire spreading

It's getting hotter than hot.

The haves will want to be in the shoes of the have-nots.

Then you will be safe for sure.

But if you are in pretence,

You're on the wrong side of the fence."

The recording, with its biting lyrics, led to an encounter with Prime Minister Manley, who summoned Andy to Jamaica House.

Upon his arrival, a visibly upset Manley sarcastically reminded Andy that he (Manley) was the biggest man in Jamaica, to which the outspoken Andy responded: "But, Mr Manley, you know say you must have opposition as a politician. Mi no have to tell you that."