Another Award, Sting for Sophia Brown 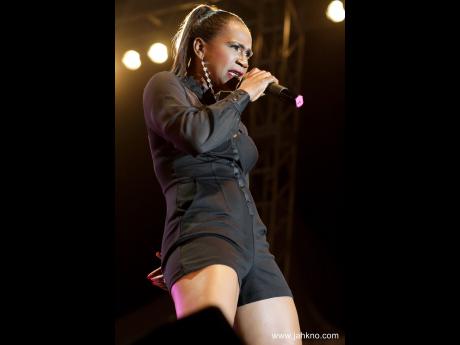 A few days after receiving the good news that she was crowned 'Best Female Lovers Rock Singer 2015', at the annual Lady Flava Network Awards in Hartford, Connecticut, for the second consecutive year, reggae songbird Sophia Brown, has her sights set on delivering a winning performance at Sting 2015, the Greatest One Night Dancehall/Reggae Show on earth.

The award-winning singer, is expected to charm fans with popular hits like, Gimme That Good Love, Catch Me If You Can and Betty Wright's Tonight is The Night. She is hoping to build on positive strides she has made in 2015.

"This will be my second time gracing the stage at Sting, and I am hyped and ready to bring it to fans, gift-wrapped and all," she gushed.

While the full Sting 2015 line-up has not yet been unveiled, event organisers said the event will bring back dancehall rulers of the 1980s including veteran deejays Josie Wales, Charlie Chaplain and Brigadier Jerry, who are booked to deliver a 'three the hard way' performance.

Considered one of the hardest-working female performers in the industry, sultry Brown is hoping to end the year in a blaze of glory. She started 2015 with a scintillating performance at Rebel Salute in Richmond, St Ann, in January. She then delivered a first class performance in New York at the sixth annual Linkage Awards, where she won an 'Outstanding Achievement In Music Award'. She headlined 'Sophia Brown In Concert' at the West Indian Social Club in Hartford, Connecticut and held fans in a musical trance at the Taste of The Caribbean and Jerk Festival in Hartford, Connecticut, where she shared the stage with reggae singer Luciano.

She also performs at the 15th annual Springfield Carnival at Blunt Park in Massachusetts, and graced the stage at the 29th annual Caribbean Festival at Great Plaza, Penn's Landing in Philadelphia.

Among her recent hit songs a combination single We're Lovers and Wide Awake, a lovers' rock ballad about falling in love, that charted in the U.S. She also enjoyed success with the sizzling R&B-flavoured single, Rain Over Me, that charted on New Style Radio, 98.7 FM chart in Birmingham, England, and the Star Top 10 chart in New York.

"I have enjoyed tremendous success in the past few years ,and must give thanks to my management team and my fans for all the positive vibes. I am doing what I love to do, which is to record and perform music, and it hardly ever feels like work," she said.

Brown is in studios recording tracks for a soon-to-be released album. She will head to Europe for a tour organised by her booking agent, Dream Team Entertainment.